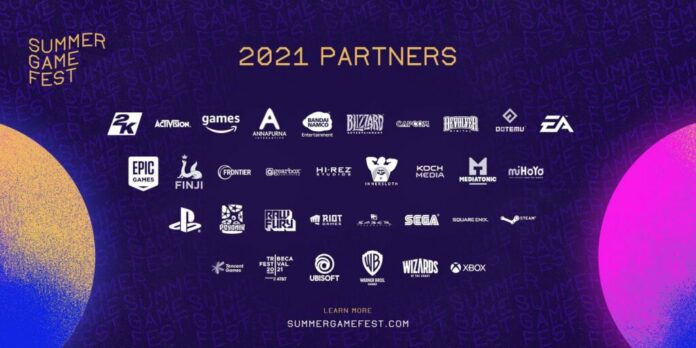 June 10th marked Summer Game Fest 2021, Geoff Keighley’s pre cursor to E3 which itself kicks off on Saturday 13th June. With rumours, leaks and hype reaching fever pitch, Last Word on Gaming takes you through the big game releases and all the news.

First up was Gearbox and 2K’s Tiny Tina’s Wonderland coming in 2022. A looter shooter with fantasy elements. Lovers of Borderlands will love this but it is not a Borderlands game.

SNK take us back to the 1990’s with an unexpected Metal Slug title and hopefully the game will be as cool as the trailer which was a lot of fun! Metal Slug Tactics is coming to Steam and PC but will it come to more platforms? More will be known as the summer progresses.

Next we got a surprise guest in Hideo Kojima. Keighley asked what we can expect next from the gaming great but he was keeping his cards close to his chest. Well, that was until Kojima asked Keighley to hold on for ‘one more thing.’  The one more thing is Death Stranding: Director’s Cut coming to PlayStation 5.

The stars kept coming with Jeff Goldblum up next to announce the World Premiere of a new Jurassic Park game. I really should have made that obvious connection! Jurassic World Evolution 2 is coming this year to Xbox Series X/S, PS5, last gen and Steam but is not coming to Nintendo Switch.

Lost Ark  is an MMO game from Amazon games and Smilegate RPG (Prime gaming was sponsoring the event). The game arrives this Fall and if you like dragons you could be onto a winner here! From the trailer this looks to be a bit Game of Thrones in style.

Call of Duty Season Four was announced by Johanna Faries the Call of Duty esports commissioner. This will cover Warzone and Call of Duty and the trailer shows Zombies uncaged for this free content update coming this summer. Faries then went on to talk about  a 150 player 2 a side tournament in Verdansk with World Series of Warzone. The World Series is in partnership with Amazon gaming. The event takes place on 22nd and 23rd June this year so not long to wait as the biggest names in Call of Duty go head to head.

Ryan Reynolds was up next to talk about his next big screen debut in which he plays Guy who enters a video game world that will change his life forever. The movie is made by the creators of the superb Deadpool films and looks to have that zany comedy at its heart. Free Guy premieres in August.

Among Us has been a sensational hit and a new mode was unveiled where you can play as a Sheriff, use new skins, pick up more achievements, map 5 and much more! Even more fun coming to one of the most enjoyable games out there!

Head of PlayStation Indies Shuhei Yoshida talked about his love for working with independent developers to bring new and innovative games to the PlayStation audience.

Salt and Sacrifice, a follow up to Salt and Sanctuary is an RPG where you hunt mages. The game has co op and online modes and looks a chaotic game coming to PS4 and PS5 in 2022.

Another Indie game for PlayStation gamers channels Sayonara Wild Hearts called Solar Ash and it looks like fast paced action with beautiful graphics. This one arrives on PS4 and PS5 this year.

FPS time next as we were shown a trailer of a lot of shooting although I was not quite sure who or what they were shooting at until we got a ‘surprise Mother Fucker’ and the action heated up.  This is Escape from Tarkov and more news is to follow this year.

The popular Two Point Hospital is a zany game and now we are getting Two Point Campus where you set up your own university. The trailer showed that we can expect more of the same zany humour and if it is as much fun as Hospital this should be another winning game when it arrives in 2020 across all platforms and the first game of the show that IS coming to Nintendo Switch.

Smite has been doing the rounds for nine years now and it shows no signs of slowing down with a Stranger Things crossover and upside down map arriving July 13th.

A new game company was unveiled which was great to see and they have a number of games in the pipeline. They are Prime Matter and there will be more news on this very soon.

Another World Premiere next coming to PC and Game Pass. A bright and fun looking shooter that doesn’t appear to take itself too seriously and is called the Anacrusis.

New World is a game coming from Amazon and more will be revealed on this ahead of its launch this August and there is a deep dive tomorrow and Keighley will be there.

Rocket League is linking back up with the Fast and Furious on June 17th with a three car pack including the fabulous Pontiac.

Sharkmob were the next developer to show off their wares with a dystopian looking game where you use supernatural powers, set your look and become the ultimate vampire!!  Blood Hunt comes to Steam in 2021.

Something more subtle from BandaI Namco as a battle looms on the horizon for a band of powerful heroes. Prepare to ‘get toasty’ and battle darkness with Tales of Arise. PS4, PS5, Steam, Xbox Series X/S and Xbox One gamers can get their hands on more information in the coming weeks.

June the 29th sees Sky come to Nintendo Switch much to the joy of the Nintendo fans on social media who an hour in were starting to lose patience! If you loved Journey this will be right up your street and there is not too long to wait.

Planet of Lana is coming in 2022 to Steam and Xbox consoles. A beautiful art style although little was shown of this one.

Aaron Keller came on to talk about how the game is switching to 5V5 combat as Last Word on Gaming reported recently. Keller talked of updating the look of the game and showed off  new models of Baptiste who has a glowing glove and Sombre who has been updated with circuitry and nodes in her clothing.

Dungeons and Dragons Dark Alliance is coming to Game Pass and recently Keighley sat down with the devs to have a play of the game and it certainly looked like they were having plenty of fun! 22/06/2021 is the date to get your hands on this one!

PC gamers can get a free copy to play until June 20th of Battlefield 2024 via Amazon Prime gaming. And it is the full game so fill your boots and load your guns.

More Nintendo Switch love as we saw a trailer for upcoming game Monster Hunter Stories 2 which is one of Nintendo’s big hitters for 2021. Wings of Ruin and Amiibo will be coming July 9th.

Weezer popped in with a performance off their new single Wave Break for the game Wave Break which releases on Nintendo Switch and Steam June 11th.

Endless Dungeon comes to PS4 and PS5, Nintendo Switch and Xbox Series X/S and Steam. It is a tactical rogulite where you need to protect your crystal from hordes of monsters.

Far Cry 6 is an eagerly waited game coming in October 2021 where you need to take down a vicious dictator. Expect plenty of action in this one.

Fall Guys is getting a new costume! A Nier Automata 2B costume. An odd crossover but hey its Fall Guys so anything goes!!

Nintendo Switch owners might want to close their eyes now as the next game was Genshin Impact which is out now but it is not coming to Nintendo Switch I am afraid to tell you. More to come on this one.

A new developer next in Deviation Games who are ex Call of Duty and they also revealed that they have entered into a partnership with PlayStation and they say that this is all about quality. So there is the first collaboration on this summer of games! Deviation didn’t have a game to show today but they are working on a brand new I.P. We will watch this with great interest.

Sonic Generations next but not a game reveal. No, this was another musical movement and I have to say it was brilliant as the Philharmonic Orchestra wowed with their musicianship as Sonic did his stuff on a big screen. I enjoyed that. Happy 30th to the blue blur.

Back 4 Blood was given a brief airing with a beta coming later in the summer. From the creators of Left 4 Dead this is unashamed zombie blasting at its bloody best and it comes out October 12th. We will bring you more news on this one as soon as we can.

Tunic, an isometric game where you play a fox washed up on a beach and you start to venture around the area. This is very much a game of exploration and a brand new demo will be playable on Xbox on Tuesday 15th June.

July 27th brings a tribal game to PC and PlayStation 5 where you must protect your township and the dark spirits. Craft weapons and. Build your tribe to take down giants that will stop at nothing to cause untold destruction. It is a David Vs Goliath tale and is called Tribes of Midgard.

Evil Dead The Game was announced at TGA last December and Til Willits CEO of Saber brought more gameplay for us to take a look over. Expect savage killings and dark tales. Choose the path of evil or righteousness and kill your way to success. Darkness is evil. Evil is darkness. Be afraid for this one when it launches across all platforms in 2021.

From one of the industries biggest names came the big finale Geoff kept telling us all about. It is the World Premiere of a game that everyone has been wanting and it is Elden Ring at last. George R.R. Martins world looks epic in this trailer and this is a game that will be huge. Looking graphically superb, frantic and action packed this could well be a game that will take then Game of the Year crown. This is a cross generation title coming in January 2022 and the hype for this will be incredible.

What We Want To See From Kingdom Hearts IV After the...