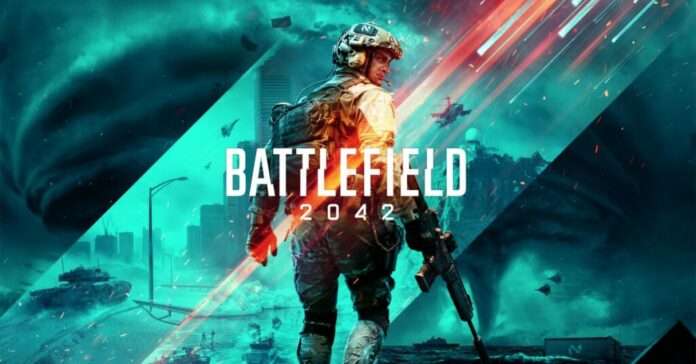 00The latest entry in EA’s juggernaut FPS franchise Battlefield has been officially revealed. Rumours from Wednesday morning placed the game in a near-future setting and were proven to be correct as the game will be called Battlefield 2042.

Are You Ready to Join the Battlefield Again?

Battlefield will be heading into a completely new time period with 2042. The last two games have been historical shooters, set in World War 1 and World War 2, while there was a string of modern Battlefield games prior to 2016’s Battlefield 1. There was also a futuristic game called Battlefield 2142, released in 2006.

However, the near-future setting is new for the franchise. It is comparable to the setting of 2012’s Call of Duty Black Ops 2, which placed its events in 2025. Similar equipment will appear across both games with the Battlefield 2042 trailer showing off a wingsuit and drone combat, both of which were in Black Ops 2’s campaign.

There were also references to previous Battlefield games in the trailer. At one point, a pilot ejects from his jet and destroys another with a rocket launcher before landing safely in his cockpit. This was seemingly a reference to a famous clip from Battlefield 3. The trailer also showed a tornado destroying a city, similar to the earthquake shown in Battlefield 3. These will reassure players that despite having similarities with Black Ops 2, this game will be Battlefield through and through.

The trailer did not show much else in truth. There was a rocket launch site, high-speed vehicle combat across a frozen lake and the classic close-quarters urban combat Battlefield is known for. However, not much was shown beyond this. This was likely a deliberate move by DICE as all interest in 2018’s Battlefield 5 was killed following the disastrous reveal trailer.