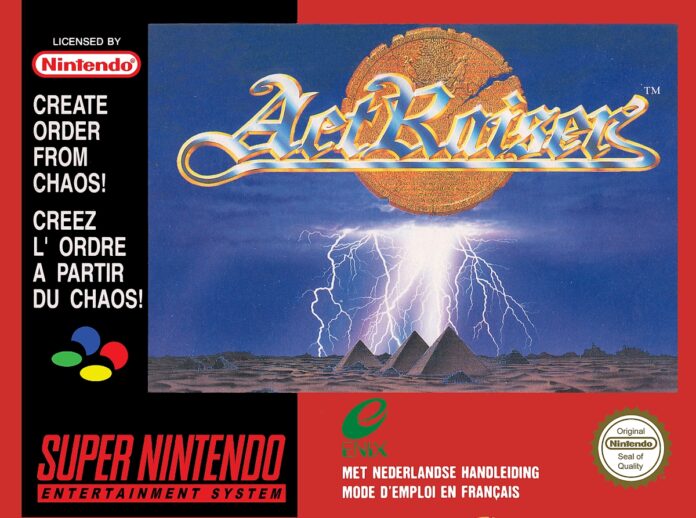 Gaming has a rich history that spans multiple decades. To this end, The Last Word on Gaming Backlog is a series that looks back on titles across all generations. From the golden 8-bit era to the landscape-changing 64-bit scene and beyond, The LWOG Backlog’s aim is history. It’s time to build a whole new world as we take a look back at the often overlooked SNES gem known as ActRaiser.

Develop the Land, Grow Your Power

When looking at the various developers on the Super Nintendo, Quintet tends to go unspoken more so than others. For those that don’t know, Quintet was a Tokyo-based video game developer with strong ties to Enix, the latter currently known as Square Enix. This partnership brought rise to a number of refined 16-bit titles, Soul Blazer and Illusion of Gaia included. Quintet’s run on the SNES had to start somewhere, which brings us to ActRaiser, released in 1990 in Japan, the year after in North America, and 1993 in Europe.

ActRaiser is among the most interesting games on the SNES due to its blend of different genres. Specifically, it takes elements from platformers and city-building titles, creating an entirely new experience. The idea of meshing unlikely genres isn’t entirely out of the ordinary; Yoku’s Island Express, one of the most well-received Metroidvanias of the modern age, is a prime example. Suffice to say, ActRaiser was a unique beast in its day. More than 3 decades later, it holds up as one of the deeper cuts of the SNES library worth revisiting or experiencing for the first time. Let’s take a closer look.

Though admittedly a simple story on the surface, ActRaiser for SNES boasts certain religious overtones. In the Japanese version, The Master is referred to as God while The Evil One is called Satan. Nintendo of America’s policy regarding sensitive content resulted in the aforementioned renamings. Nonetheless, religious overtones still exist, not only concerning the story but the game’s settings, characters, and overall aesthetic.

As mentioned earlier, ActRaiser for SNES blends two genres: platformers and city-builders. In the platforming sections, collectively under the Action Mode title, the player takes control of a warrior-like statue that The Master has brought to life, said statue fighting for the good of mankind. In these levels, the statue runs, jumps, and attacks with his sword and a host of magical attacks. Each Action Mode section has a Guardian, or boss, that must be defeated; this results in The Evil One’s power weakening and peace continuing to be restored to the world. Furthermore, in between each action phase, the game’s second gameplay mode comes into play.

Enter Simulation Mode, the city-building portion of ActRaiser. This begins with two humans that express their needs, the player requiring to not only meet those needs but protect the people from incoming threats. This is done by taking control of The Angel, another extension of The Master. In addition to protecting the growing population, The Angel fights enemies, instructs people in regard to building, and utilizes miracles such as lightning, rain, and wind based on needs at the moment.

On the surface, ActRaiser’s blending of different genres seems like a mismatch. However, in practice, it works exceptionally well, tasking players to not only use their reflexes but strategize as to how to build the world. Even those that aren’t fond of the city-building genre, which is the case for many gamers, will find that ActRaiser’s approach to it is not only user-friendly but satisfying to boot. This genre combination must be experienced to be truly appreciated.

Given its 1990 release, ActRaiser is nothing short of an early-era SNES game. Despite this, it features a strong graphical style, largely influenced by Greek mythology. This is especially true regarding the Guardians, each of which boasts a unique appearance. From the Centaur Knight to the Manticore to The Evil One himself, there is incredible detail packed into this game’s visual style. ActRaiser may show its age in certain areas, but this is far from the case when it comes to its visuals.

ActRaiser has an excellent score as well, composed by Yuzo Koshiro, whose work spans multiple decades in gaming. ActRaiser’s score captures multiple moods, each one appropriate for the situation presented to the player. “Birth of the People” is perhaps the most recognizable track, played during Simulation Mode. The theme for Sky Palace is reminiscent of an organ being played in a church or chapel. “Fillmore” is another notable track, its overall tone reminiscent of the Castlevania series. Across the board, ActRaiser’s soundtrack is solid and arguably one of the finest on the SNES.

On average, ActRaiser can take anywhere from 6 to 8 hours to complete. While this isn’t to take away from the overall experience, there isn’t much in the way of replay value. ActRaiser’s side quests are nonexistent and once the end credits are reached, there isn’t much incentive to immediately dive back in. There is also a lack of additional difficulty modes, meaning that the way that this game is played is how everyone will experience it. This is an SNES classic that’s best enjoyed once every few years.

Having sold a little over 600,000 copies worldwide, ActRaiser received generally positive feedback from gamers and critics alike. In fact, it was received so well that a sequel, known simply as ActRaiser 2, was released in 1993 on the SNES. However, this title lacked the city-building elements of the original, serving as strictly an action platformer. For this reason, many regard the sequel as inferior, removing a crucial element that made the original title one of the most special on the 16-bit console.

In the years that followed, save for a 2007 Wii Virtual Console release, the original ActRaiser remained dormant. That was, however, until 2021, when new life was breathed into it via a remaster. ActRaiser Renaissance was promoted as a remastering of the original SNES classic, offering modern graphics and more expansive side-scrolling areas, just to name a few innovations. While not all these changes were met with positivity, particularly from purists, ActRaiser Renaissance accomplished what it set out to reach. For those that are more partial to the classics, the original SNES gem is worth hunting down.