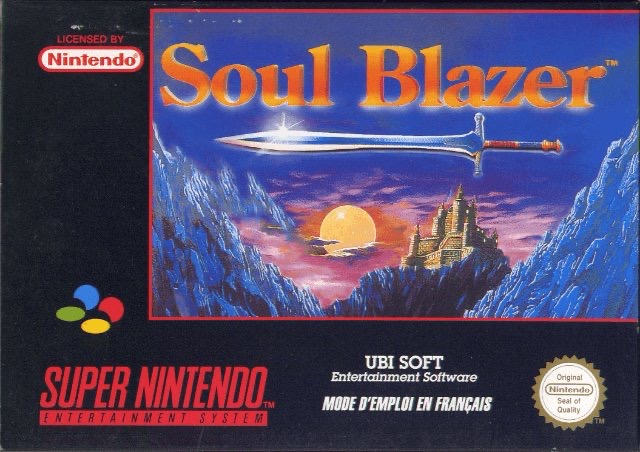 Gaming has a rich history that spans multiple decades. To this end, The Last Word on Gaming Backlog is a series that looks back on titles across all generations. From the golden 8-bit era to the landscape-changing 64-bit scene and beyond, The LWOG Backlog’s aim is history. This week, we revisit the Super Nintendo Entertainment System with one of the earliest action RPGs on the console – developed by Quintet and published by Enix, Soul Blazer for the SNES.

The first-ever entry in the LWOG Backlog focused on Illusion of Gaia, an action RPG developed by Quintet and published by Enix. At the end of the piece, it was mentioned that it was succeeded by another little-known action RPG known as Soul Blazer. This title was the first in an unofficial trilogy of Quintet games, the third and final being Terranigma, which never saw an official release in North America. Despite its limitations as an early SNES game, Soul Blazer maintains plenty of charm and provides a fair challenge to those looking to explore the deeper cuts in the console’s library.

Soul Blazer for the SNES began development after the release of ActRaiser, another Quinet-developed SNES title. Unlike the previously mentioned titles, ActRaiser was not an action RPG; rather, it was a side-scrolling action title that incorporated world-building elements, not unlike SimCity. An emphasis on world-building would become a pivotal part of Soul Blazer’s overall gameplay, too. Also known as Soul Blader to Japanese players, Soul Blazer saw a 1992 release in North America and Japan before making its way to Europe in 1994.

Soul Blazer focuses on the unnamed angelic hero – he is canonically known as Blazer, though the player can choose his name – who is sent down to the world by the god-like entity known as The Master to restore it. Prior to this, Deathtoll, an evil being, laid waste to villages. He also captured the souls of beings in monster lairs, resulting in an overall loss of life on Earth. With the guidance of The Master, Blazer must free those imprisoned, all the while learning of Deathtoll and how his devastation came to be.

Compared to other RPGs, including those that were released during this time, Soul Blazer for the SNES doesn’t have the most complex story. Despite being powerful and brave, Blazer is a silent protagonist, not having much bearing on the game’s narrative. It’s the game’s supporting characters that push said narrative forward. Despite its lack of complexity, Soul Blazer tackles mature themes such as sacrifice and death. Like Blazer, the player goes along for the ride, watching as the hero learns how the post-apocalyptic state of the world occurred.

The main objective of Soul Blazer is to free civilians, animals, and the like from their monster lairs across numerous dungeons. By doing so, villages will repopulate, further developing them. This will prove useful for Blazer, as he can speak to those rescued for help, whether it’s in regard to dungeons that can’t be accessed further or items that can be gained. Dungeons house their own bosses as well; by eliminating these threats, only then will the villages in question be at peace.

Soul Blazer for the SNES has the player moving on a four-directional grid, which offers a strategic take on the game’s combat. It doesn’t benefit the player to attack enemies head-on. Instead, they must maneuver around them, whether at the side or behind them, to attack without fear of being struck back. Not only is Blazer’s trademark sword used for combat, but by holding L or R, he can use telekinesis to attract far-off GEMs, which are used to cast magic spells.

Speaking of magic, the various spells are among the many gameplay mechanics Blazer can equip. As stated earlier, these spells require GEMs to summon, so be sure to collect them as enemies are defeated. Soul Blazer for the SNES provides players with multiple types of weapons and armor, which bolster not only increased strength but features needed to progress. Case and point, while one set of armor allows Blazer to traverse intensely hot areas, another set of armor will provide him with the ability to travel underwater without concern for air.

As stated earlier, Soul Blazer for the SNES was one of the earliest action RPGs on the platform. Graphically, this is accurate, as it isn’t an overly complex-looking game. It looks like a title that was made before developers had a solid understanding of the Super Nintendo’s architecture. With that said, it doesn’t skimp out on color. It is incredibly vibrant, with each area possessing a unique aesthetic. Whether it’s the lush landscape of GreenWood or the aquatic St. Elles Seabed, to name a few examples, Soul Blazer feels imaginative despite its limitations.

Soul Blazer has one of the more unique soundtracks on the Super Nintendo, too. Despite being an RPG, at its core, its soundtrack isn’t always heavy. Many of the tracks are upbeat and funky, sticking with the player even when they’ve long since watched the end credits. Soul Blazer for SNES was composed by Yukihide Takekawa. Not only did Takekawa compose this title, but he also created music for such productions as the Super Sentai show, Choushinsei Flashman. As if this wasn’t interesting enough, he was the vocalist for a Japanese rock band known as Godiego.

In terms of length, Soul Blazer holds its own among the RPG lineage of the Super Nintendo. A straight shot, from beginning to end, probably won’t take a seasoned gamer any longer than eleven or twelve hours. However, if a player were to complete the game one-hundred percent, eliminating all monster lairs, collecting each piece of armor, and the like, the game can last as long as twenty hours. Given that RPGs are known for being extensive, this should come as no surprise. Granted, there isn’t much in the way of side quests, meaning that the main story will always take center stage. However, given how lengthy said story is, featuring twists and turns players may not expect, it ensures players will get their money’s worth.

Though it may not be the most refined title by Quintet – Illusion of Gaia would go on to further the concepts introduced in this title before Terranigma took them to greater heights – Soul Blazer is a title worth playing today. It’s an interesting piece of Super Nintendo history. Furthermore, it’s a genuinely good game, even if the mechanics are rigid compared to the titles that were released afterward. Unfortunately, outside of scouring eBay for a third-party seller, emulation is the only way that newcomers can experience this title.