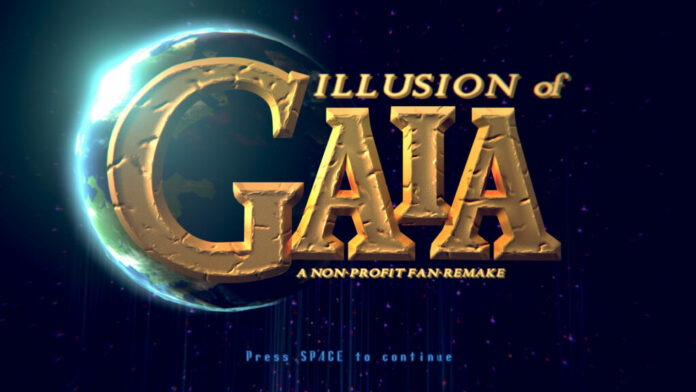 Gaming has a rich history that spans multiple decades. To this end, The LWOG Backlog is a series that looks back on titles across all generations. From the golden 8-bit era to the landscape-changing 64-bit scene and beyond, The LWOG Backlog’s aim is history. In the first-ever piece in this ongoing series, we will take a look at the action RPG released by Quintet, Illusion of Gaia.

Will is a young boy that lives in the quaint town of South Cape. One year prior, Will ventured to the Tower of Babel alongside his father. However, the expedition proved to be disastrous, as Will’s dad went missing. Will returned to town but his new goal became clear: to reunite with his father. Shortly after school one day, Will stumbles into an astral plane known as the Dark Space. It is here that Will meets Gaia, an otherworldly being that passes knowledge to the young aspiring explorer. Gaia informs Will that a comet is approaching; only Will can stop it from causing a catastrophe, leaving a devastated world in its wake.

This is the story of Illusion of Gaia. This action roleplaying game was developed by Quintet, published by Enix and Nintendo, and released on the Super Nintendo in 1994 in North America. It is also one of the most overlooked titles on the 16-bit system.

The player takes control of Will, who makes his way from South Cape en route to the Tower of Babel. Illusion of Gaia is an action roleplaying game at its core, but the way that it approaches the genre is interesting. In most action RPGs, characters level up after defeating enough enemies and earning experience points along the way. However, Illusion of Gaia only grants the player upgrades once they clear the screen of all enemies. From there, the player receives an upgrade to either their attack, defense, or health power. Clearing the board is the primary way these upgrades are received, so it benefits the player to search every corner for foes.

Another defining characteristic of Illusion of Gaia is that Will isn’t the only playable character. As the game progresses, the Dark Space grants the player the ability to shapeshift. For example, Will has only moderate strength but can play key songs with his flute, prompting certain actions. Freedan, the Dark Knight, is more powerful than Will but cannot access the latter’s unique abilities. However, in most dungeon-like areas, Freedan will be the key character players use. Toward the end of the game, players are granted access to Shadow, a being comprised entirely of dark matter. Shadow’s unique ability lies in his Aura, which allows him to pass through the floor beneath him. Players must master these three forms to be successful.

While combat is the name of game, Illusion of Gaia keeps things interesting by having the player explore various terrain. From South Cape, the player will venture to the royal Edward’s Castle, the tranquil Itory Village, the airborne Sky Garden, and beyond. The game also boasts real-life locations, including the Great Wall of China. Each location has a purpose, whether in regard to the combat or the story, and they usher the game along. There is very little wasted time in Illusion of Gaia.

While the gameplay of Illusion of Gaia is incredibly enjoyable, the real magic of this game is in its story. The game starts low-key enough, in the aforementioned South Cape, but things pick up once Will encounters one of many side characters, the escaped princess, Kara. From there, Will’s journey officially begins. The game’s supporting cast is just as important as Will, as their unique personalities lend said characters to memorability. You will remember these characters after the credits roll.

What’s also remarkable about Illusion of Gaia is the series of deep, thought-provoking topics it presents. For being a mid-90s Super Nintendo game, its story is shockingly gripping, tackling subjects such as personal loss and slavery. Furthermore, these topics aren’t ham-fisted. They’re given the weight that they deserve, and when a big moment occurs, it feels well-earned. This isn’t the place to spoil plot points, but rest assured that this is one of the more complex narratives to be found on the SNES.

Illusion of Gaia is, without question, one of the best-looking games to hit the SNES. Many titles on this system have aged well, especially from a graphical standpoint, and Illusion of Gaia is no exception. In addition to being one of the most colorful titles on the system, it utilizes the console’s capabilities to their fullest, making towns, dungeons, and landmarks feel alive. The floating cherry blossom petals in Freejia, the height, and scope of Sky Garden, the sheer heat of the Desert Village Dao – these are just a few instances where new players will be taken aback by this game’s visual style.

The other aspect of Illusion of Gaia’s presentation is its soundtrack. Anyone that has fond memories of these games will be able to hum many of these tracks by heart. Whether it’s the regal arrangement that serves as a backdrop to Edward’s Castle or the solemn or soft notes that emit from Will’s flute, sound plays a major role in establishing this game’s identity. Even songs that repeat, such as the sole theme for each town, are catchy enough to where invested players won’t mind hearing them time and time again.

Once a player completes Illusion of Gaia, what will keep them coming back? By and large, this is a linear game, with the player carrying out a central story. With that said, the game itself is buoyed by a simple yet effective approach that makes it easy to pick up and play. Additionally, the story in question is gripping enough for one to want to see through to the end. Much like a good book, it’s worth revisiting once every few years.

This is especially true when regarding the Red Jewel sidequest. As the game unfolds, players will come across circular gems known as the Red Jewels. Once enough are collected, a player can visit a Jeweler in one of the multiple towns for prizes. These prizes can range from a medical herb for healing to special combat moves. Many of these Red Jewels are well-hidden – even to a fault – so for anyone looking to complete the game one-hundred percent, a list of their locations would be worthwhile to have on hand.

Illusion of Gaia is one of the best games for the Super Nintendo that many people don’t remember. It was part of an unofficial trilogy created by Quintet. Illusion of Gaia was released between its predecessor, Soul Blazer, and its successor, Terranigma; the latter never saw a stateside release. Collectively, fans referred to them as the “Soul Blazer Trilogy.” While the games aren’t direct sequels to each other, they share common themes, the most prominent being restoration of life.

Needless to say, Illusion of Gaia is worthwhile for anyone that’s into action RPGs. It stands tall with the likes of Secret of Mana and Secret of Evermore, just to name a few such titles on the system. Illusion of Gaia was never rereleased outside of the SNES. Therefore, in my opinion, it’s perfectly fair game for emulation. However, if you’re into vintage game collecting, it’s absolutely worth adding to your collection.