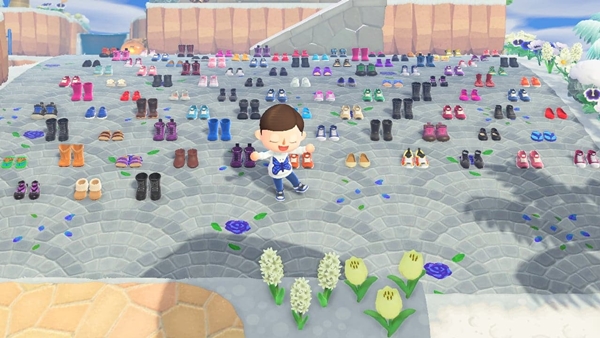 There are so many flowers here, a carpet of them, all in blue and white, intricately positioned, and the effect is breathtaking.

I’m on a tour of Malana, an experience built to raise awareness of ME.

Everything about Malana is deliberate, designed to walk you through the everyday realities of living with a chronic illness: the loneliness and isolation, and the need to advocate for yourself and for others.

Malana is an island designed using the 2020 smash-hit videogame Animal Crossing: New Horizons. Like many other people (11 million of them, in fact) I picked it up in the lockdown of 2020, reveling in the freedom to explore and connect with others in a moment of global isolation.

While the U.K has opened up again and my own island has been overtaken by weeds and neglected villagers, the Animal Crossing community remains strong.

It’s there that I met Lisa, aka The Unlikely Gamer. Meeting her has reminded me of the power of video games to connect people, and to become a safe space in which to rest.

Animal Crossing and the ME Community

Lisa’s life changed after she fell ill with a flu-like virus in October 2019. ‘I had a number of GP appointments, as I just couldn’t seem to get better,’ she said. ‘In February 2020, when I was still unwell, I was diagnosed with ME by a very clued-up and understanding GP.’

For many people with ME (which stands for myalgic encephalomyelitis, also known as chronic fatigue syndrome), the road to diagnosis is tough. People can experience a range of life-changing symptoms, including exhaustion, problems sleeping, and muscle or joint pain, and finding help can be hard.

In the early days, Animal Crossing was a great escape for Lisa. ‘The game was launched a month after my diagnosis, so it was at the point when I’d had to give up my full-time job and I was wrapping my head around my illness … it helped with my mental health a lot when I was adjusting to having lost my job, not being able to drive, not being able to socialise, or take part in my hobbies anymore, and just feeling ill all the time.’

In early 2021, Lisa made a film for the National Videogame Musem’s Animal Crossing Diaries archive, which chronicled people’s experiences playing Animal Crossing through global lockdowns. Lisa wanted her film to show the realities of living with ME. ‘It wasn’t an illness I’d really heard of until I fell ill with it myself.’

Seeking connection with others, Lisa joined Twitter and began sharing screenshots of the game. ‘Other people with ME seemed to really like seeing them,’ she says. Gradually, she used her Twitter account, and the game, to raise awareness.

Which leads us to Malana.

Creating an ME Awareness Island

‘It was surprisingly painful at the beginning,’ Lisa says, ‘as I had to destroy the island I’d spent so long creating, since I first started playing the game.’ But she was determined, and so her old island disappeared, evolving instead into Malana.

Lisa’s first island evolved organically, but this one required some planning. Lisa mapped it out at the beginning, creating three separate paths. This is significant. ‘People with ME have limited energy and have to make choices about what they are able to do in a day – so I literally made a map (on paper) to plan the route each path would take and which buildings would go where.’

I follow Lisa, hopping across stones and following winding paths decorated with flowers and ornaments, all of them in blue-and-white. Along the way, there are words repeated several times. Stop. Rest. Pace. A mantra that helps people with ME to manage their energy levels. One villager’s house is like stepping into a celestial cocoon, everything blue and twinkly, a moon glowing softly in the corner, representing the importance of rest and recovery.

One room, in particular, makes me pause: the basement of Lisa’s virtual home. In the dimly-lit space, I make out several objects that don’t seem to belong together. A bike, a mannequin, a three-tiered cake, an electric guitar. Objects to represent hobbies and careers now abandoned. It’s a powerful scene, and I stop to take it in for a moment before she guides me away.

While it’s easy to think of gaming as an isolating hobby, many people find positives in abundance. That’s what Lisa has discovered with Animal Crossing. ‘It can be such an isolating illness,’ she says, ‘And it’s always so lovely to chat with other people who understand what you’re going through. Although I think it’s also important to mention that not all people who have ME are able to tolerate playing video games, as the symptoms and severity of the illness vary so much.’

We reach a small clearing, in which there are pairs of shoes, neatly lined up in rows. This is Lisa’s Millions Missing display. ‘The display is based on a real-life campaign where pairs of shoes are placed outside prominent buildings across the world to represent all the people who are missing from their lives due to being unwell with ME.’

I browse the shoes. There are sandals, trainers, ballet flats, DM-style boots. ‘I put a call out on social media asking people with ME to get in touch if they would like to have a pair of shoes in the virtual display and the response has been amazing.’ She now has 100 pairs of shoes on display, and the requests to join keep coming.

‘I asked each person what shoes they would like (style and colour) and then tried to find the closest match in the game. I’ve added the name of each person and the year they fell ill to a list on my website, because I feel it’s important for people visiting Malana to realise the real human impact of the illness.’

Lisa asks me if I would like to take a picture. She makes her character pose on one foot, arms spread, smiling, in front of the rows of shoes. I try to take in what I’m seeing, and what it represents. I try to imagine each person, ‘missing’ from their regular lives, thanks to an under-researched and often misunderstood illness.

Malana highlights the emotional and practical difficulties millions of people face and the dire need for more research and funding. It also highlights the creativity Lisa has shown, and how she has spent her energy advocating for others with ME.

AC:NH provided lockdown comfort for millions of people, a way of expressing creativity, and finding like-minded people. For many others, it continues to do so, giving people a chance to socialise virtually, which is desperately needed.

I ask Lisa what has surprised her most about her journey with Animal Crossing: New Horizons. For her, it is the social aspect. ‘It’s been such a great way of meeting people and making new friends, despite being unwell. I would have been so isolated if I hadn’t gone down that path.’

We swap gifts. I give her a cuddly toy dog because I think dogs bring joy as a general rule. She hands me a blue-and-white wreath, which I place on my own virtual front door, a small reminder of my visit to Malana.

‘I never would have imagined how much playing a videogame would bring to my life!’ Lisa says and I think a lot of us can relate to that.

Are you still enjoying Animal Crossing two years on? Leave your comments below and let us know your thoughts!

This was such a great read! What a wonderful idea, must’ve taken her so long to build!