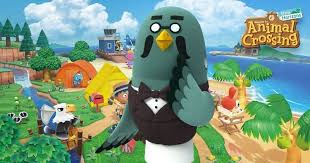 Animal Crossing: New Horizons – a lockdown comfort blanket for many gamers across the world – is finally starting to wind down, with the imminent arrival of a brand new Animal Crossing update. 2.0’s features were announced today in a special Nintendo Direct, and there will be no more updates after this one. But don’t worry – it’s a meaty upgrade, and there’s a lot to talk about.

Excitingly, AN:CH will also be getting its first (and last) DLC – Animal Crossing: Happy Home Paradise, which can be bought separately or accessed as part of the new Nintendo Switch Online + Expansion Pack membership. There’s plenty for fans to get their teeth stuck into here.

Let’s take a look at what was announced during the Nintendo Direct today:

Of course, this isn’t the only Animal Crossing update we’ve had over the past year. We’ve had the addition of festivals, events, and new characters popping up from time to time, which has helped to refresh interest in the game as it started to become stale. This, in comparison, is a major upgrade with a lot to talk about.

The most exciting news for longtime fans of the franchise is the arrival of Brewster, a mustached barista pigeon serving drinks in coffee shop The Roost. This is a nice throwback to previous games, and you can sit down to have a coffee with characters from your island, as well as other players. You can even summon characters using Amiibo cards if that’s your thing.

Also making a reappearance is Kapp’n, a happy green turtle. He can transport you to another island for 1000 Nook Miles, so you can mine resources. These islands may be in a different season or time of day to your own island, which means you may be able to find those awkward resources you had to wait months for otherwise. To pass the time on the way, Kapp’n will sing you a little sea shanty, which seems almost unbearably adorable.

Harv’s Island – which arrived in one of the previous updates – is having a big revamp. You can now invest bells into market stalls, making a permanent home for island visitors like Sahara, Redd, and Katrina. This means you can visit them at any time – no more waiting around for them to come to you.

Another throwback is the reintroduction of Gyroids, although these are different than they used to be. Now customizable (and pretty cute), you can dig them up on your island, and it looks like there are plenty of types to collect.

Talking of digging things up, you can use the crops you’ve been taking care of all this time to cook meals, combining ingredients in your kitchen to display (or eat).

One more major thing to talk about in this Animal Crossing update is the exercise feature. You now have the option of joining your villagers in a nice relaxing exercise session (as in you, in real life – it uses motion controls, so if you need an excuse to do your daily stretches, now you’ve got one).

Oh, and you can also set island ordinances – for example, you can encourage your villagers to come out first thing in the morning or setting early/late opening times for shops. This means the island will work for you a little more than it does currently, so if you’re having to squeeze in your playtime before school or work, this should make things easier.

Phew. Told you it was a meaty update. Now onto the DLC.

The Happy Home Paradise DLC introduces a nice side-quest for those whose islands have already been customized to death. You’ll be able to fly out to a new island hub (Paradise Island) to create dream holiday homes for your clients.

Clients will have specific needs – an obsession with teddy bears, that sort of thing – and you’ll design homes to their specifications, in return for Poki, a brand-new currency. You can spend this back on Paradise Island on rare furniture. You can even build other types of buildings, like schools and hospitals.

For ultra-creative island designers, this is a dream come true, with plenty of gameplay. You’ll unlock new abilities as you go along (for example, being able to adjust the season on a particular island), and you can even play around with lighting effects. Once you’ve unlocked these new abilities, you can use them on your own island, too.

How much does it cost? Well, that depends. You can buy the expansion pack outright for $24.99, or you can take advantage of the Nintendo Switch Online + Expansion Pack membership. This will unlock Happy Home Paradise, but at a different kind of cost. If you cancel your membership, you’ll keep hold of your new abilities, but lose access to the archipelago of islands you designed, unless you buy the expansion pack yourself or sign up for the NSO + Expansion Pass again.

Both the update and the DLC will be arriving on the 5th of November, with pre-orders for Happy Home Paradise being taken from October 29th.

It’s a pretty generous upgrade, with some nostalgia thrown in for longtime AC fans. I guess it’s time to apologize to my villagers for my gross neglect. And do a bit of weeding …