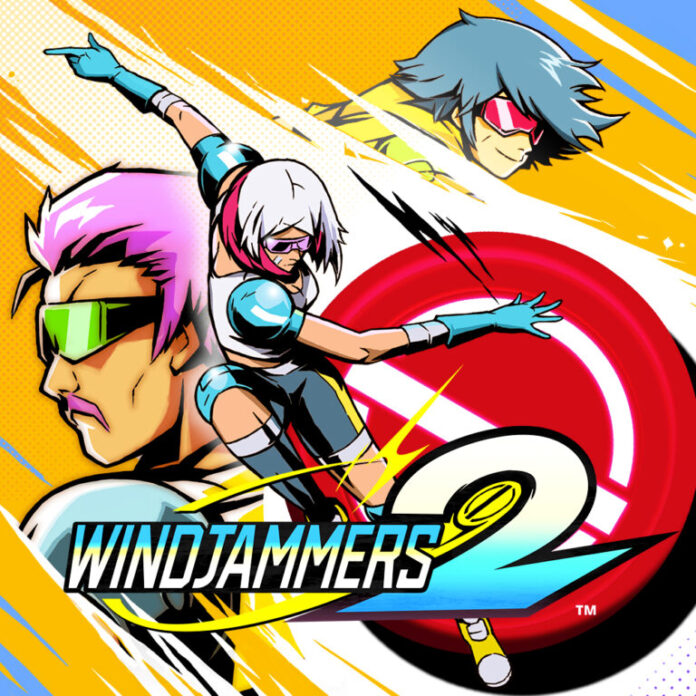 Windjammers was an excellent arcade style game that fused a number of sports into one insane offering. Now we have Windjammers 2 that takes air hockey, table tennis, volleyball, frisbee and adds in some crazy special moves providing a fast and frenetic game that leans towards to multiplayer excellence whilst single players may find there’s not quite enough for the long term.

The original Windjammers game was a 1990’s Arcade game that sat alongside the likes of Street Fighter and went on to become a cult classic due to its frenetic gameplay and suitability for two player showdowns. A game that really brought out the competitiveness in me and led to hours of time not doing my homework. The game came from Data East for the Neo Geo and at first it wasn’t actually that popular but sometimes a game just has that moment when everything clicks into place and that is what happened to me and many more gamers in the 1990’s. This is like Pong on steroids and when they say ‘if it isn’t broke don’t fix it’ that is what we have right here with Windjammers 2.

A story for Windjammers 2 is a bit tricky to describe really, because the fact is that this is a pure arcade game where the aim is to win the Windjammers World Tournament. There are now ten characters to choose from which are the original six who have clearly looked after themselves in the ensuing 25 years since the first game and four new characters including the speed spinning Steve Miller fan (original character), Jao Raposa.

As I mentioned at the start, there are a multitude of sports and games that have been infused into the Windjammers world but air hockey is definitely the one that I feel stands out the most and here you don’t have to end up with bruised knuckles! I could try and make the gameplay sound a lot more intricate than it actually is but the fact of the matter is that Windjammers 2 is about speed, reactions and a touch of tactical guile to beat your computer or human opponents.

You will start with the ‘serve’ and launch your disc frisbee toward your opponents goal on the other side of the field of play. There are different arenas to play in, including a casino, grass, tiled and rooftop locations but ultimately the pitch is the same in terms of size but there are twists in the layout.

In the one player arcade mode for example – this mode is similar to the likes of Street Fighter in so much as you take on each of the other nine characters until you finally beat them all and take home the trophy- the goal line is split into one red portion and two yellow portions. In your initial games the red portion is in the middle of each goal and if the disc goes in via that route the points will be higher than if the disc goes in via the yellow areas. Once you hit that initial serve, things will start to speed up very quickly as the disc will fly back and forth at high speed as you try to lure your opponent away from the goal and smash, volley or lob the disc past them. Each time you lose a point you will take the next serve and vice versa. As you progress through the tournament the red zone gets smaller and the yellow bigger meaning you need to focus on which sections you will go for.

As with characters in arcade fighting games, each one here has their own strengths and weaknesses with some being quicker and others having more brute force although I have to say that playing with each character and against them I didn’t really find the differences noticeable and it didn’t affect my progress whoever I played with which does take away a little bit from the concept of learning new skills and moves.

The special moves that are called EX moves are charged up with each shot you return and when your power bar is full it will turn blue. Then by holding ‘A’ and ‘B’ you can hit fire balls, curve balls and disc smashes but you do need to use them carefully and not waste them as if you do your opponent will collect your disc and invariably smash it back into your goal.

Playing through the solo modes is quick on the easy level but the normal and hard modes do present a much stiffer challenge but this isn’t a game that excels in its one player mode, much like the original. It is a game intended to be played by two people and this is where Windjammers 2 excels.

Pitting yourself against an online opponent really brought out my competitive streak although with the review version it was difficult to always find an opponent but I could find enough battles to get a sense that online multiplayer is this games best feature. You play either ranked matches or quick matches as well being able to match up with friends but be aware that as far as cross play goes it’s only Nintendo Switch Vs Nintendo Switch, Xbox Vs Xbox/PC Game Pass etc so you need to be within a specific family of consoles.

I found some matches would last up to thirty minutes as I came up against players who were as stubborn as myself and blocking shots at every turn and it just works superbly well. There was no noticeable drop out and everything ran smoothly with no frame drops in both handheld and docked modes.

I love arcade game soundtracks from Sega Rally to Street Fighter and Windjammers 2 had me feeling like that 1990’s young lad in the arcades. Bouncing beats and quality sound effects all add to the action and move along at the speed of the games adding to the tension, particularly when playing online.

Visually the game is superb. A good top down perspective and arcade style graphics that are colourful and vibrant and again have that feel of Street Fighter II about them when it comes to the animation – the limbs are a little stiff in their movement but it’s charming rather than an issue. The disc moves perfectly and everything is clear with no issues around the screen ever getting too busy.

If you are a multiplayer arcade game fan then you need Windjammers 2 in your collection right away. It’s fast, it is fun and it’s super addictive ticking all of the right boxes when it comes to multiplayer gaming and there is little I can find to criticise from that aspect.

If you are intending to play solo though there isn’t enough here to recommend a purchase on day one as it will be over fairly quickly and the characters just don’t have enough identity or individuality about them to make it worth your while and the play value is limited.

As an arcade game, this is an absolute belter and one that really has captured the arcade scene of the 90’s perfectly so grab a friend and get jamming.

Windjammers 2 was reviewed using a Nintendo Switch code supplied by the publisher.