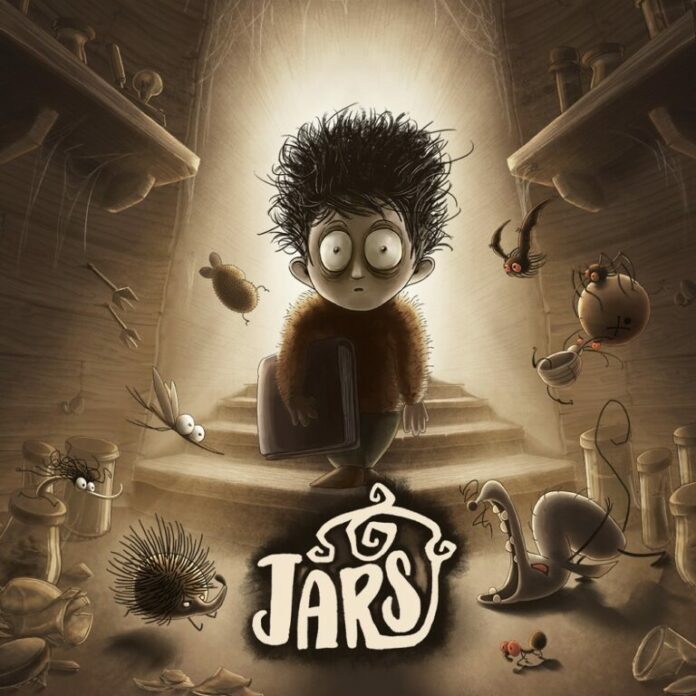 I have been racking my brains for the last week or so to try and find the best way to describe ‘JARS’ and what type of game it is and I have come to the conclusion that it manages to cover a multitude of genres despite the premise itself being reactively simple. Tower defence meets Tim Burton novel meets Donkey Kong all blended together with a quirky tale that might just end up being one of the unsung heroes of 2021.

What’s It All About Victor?

You take control of Victor who is a rather shy and unassuming Young lad who rather than seeking adventure out in the big bad world decides to go somewhere much more ghastly – into the depths of the family’s dark, damp and dank basement where all sorts of grizzly nastiness reside.

The goal itself is simple – break jars open and use the contents within to beat off and destroy the nasty creatures that lurk on each and every shelf in the biggest basement you are ever likely to come across!

Early levels break you in gently and explain to you that you need to protect the sarcophagus at all costs. Jars that have a four leaf clover on will contain items or creatures that will come to your aid but there are also jars that are totally random and you will have to take your chance when opening these which gives the game a feel of skill and luck and will keep you on your toes throughout. One wrong jar and you will have to start the level all over again. Because you will fail at times it is always worth taking note of the layout of the levels as even though the layout will change when you retry, they only change very slightly so a failure can quickly become a success for the observant eye.

The Little Shop of Horrors

As Victor progresses through each level you will earn points that you can redeem for extra creatures in the Little Shop of Horrors. You won’t need to use the shop in the early levels but as you get deeper into the basement you will find that you need a little extra help. There are levels where you can only use certain creatures such as only flying minions so you are constantly being made to think outside of the box and the game feels fresh despite the scenes looking samey throughout.

The hand drawn art style is very much in the style of a Tim Burton animation and feels just right for the story. The only thing I would say is that the graphics don’t really alter or do anything different from level to level but being honest it’s a really minor bug. (Pun absolutely intended!)

I Just Need Another Hero

Just when I thought Jars had little left to delight me I tried out the hero mode and this is such a good addition to the game that adds so much more longevity. In hero mode you take control of a character as opposed to looking in through a window and can climb stairs which really brings back thoughts of the original Donkey Kong games.

I worried as I progressed through Jars that the game would start to become repetitive but what Mousetrap Games have done is add enough variety to keep things fresh and keep you constantly thinking about your next strategy. The increasing difficulty level is pitched perfectly and this is a fabulous example of how to do a puzzle and tower defence game to the very highest standard. Cutscenes are well timed to provide a breather from the 2D puzzle action although the lack of touchscreen capability is a shame as this could have made the game even better but overall this is a game that deserves its place in any gamers library.