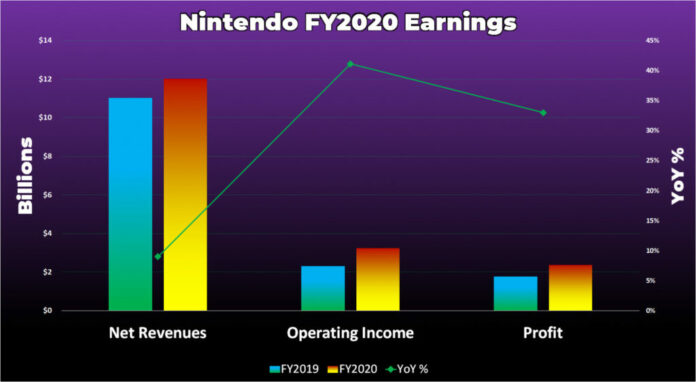 The latest set of financial reports reveal an expected profit drop for Nintendo but the company still maintains a healthy position with the Nintendo Switch still selling well although a drop in killer games has started to slow things down for the Japanese gaming giant.

The global pandemic was always going to impact on companies financials and Nintendo are no different in this regard. The UK’s Nintendo Life reported on the news citing the pandemic as having a major impact with Quarter 1 financial results being down on their 2020 equivalents;

No Cause for Concern

Any drop in profits will always raise eyebrows but there is little for Nintendo to worry about and with The Legend of Zelda: Skyward Sword now released and the new OLED model coming in October of 2021, there is plenty to keep Nintendo optimistic for a profitable year once it reaches its conclusion.

One thing that has been noticeable in recent months with Nintendo has been a drop off in quality titles coming to the Switch. Skyward Sword has received mixed reviews (you can read our review here) and Mario Golf: Super Rush has also had a mixed reception although the game continues to sell well. Metroid Dread will be a big hit for Nintendo but I can’t help feeling that Nintendo are almost cooling off a little and maybe there is a little complacency starting to creep in.

The frequency of games feels like it is slowing compared to the first couple of years but demand is still clearly there with the new OLED Switch model selling out of pre orders very quickly indeed despite it being little more than a handheld upgrade.

I find it hard to believe that third parties will throw many more games at the Switch as its lack of power is now starting to look worse with each passing month and no amount of OLED and vibrant colours can mask the performance issues the console has. Of course those issues are not new but they are certainly more apparent now and I find it almost bizarre that a Pro model is not even in production. Of course it could be but it seems unlikely we will see it any time soon.

Nintendo are in that place right now where everything they touch seems to work and whilst ever that is the case they are going to overall turn in profits, but how long that can be sustained with diminishing software remains to be seen.

Personally I am not picking up my Switch very often at all now and apart from the odd title cannot see it doing much in the coming months other then collecting dust. As long as Nintendo continue to have the success with the Switch though, they won’t care one jot.