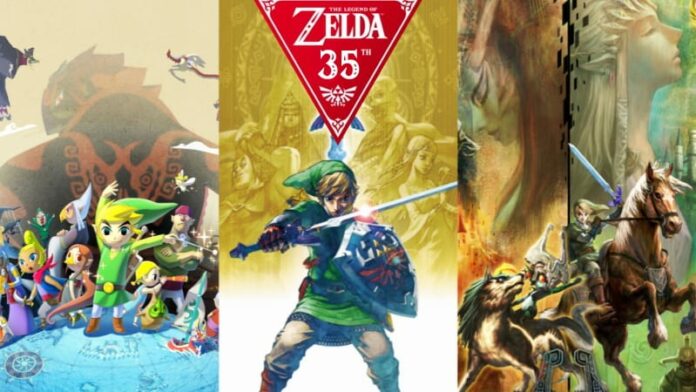 Nintendo are a beloved company to many. They have some of the most popular game franchises in the world under their belt including Mario, Metroid, and the Legend of Zelda. Even the spinoffs of these series go on to become gaming juggernauts in their own right when you consider the likes of Mario Kart and Metroid Prime.

Yet anniversaries seem to be a long running issue for Nintendo.

A Breath of Wild Deflation

Back in 2020, Nintendo went all out to give Mario a stellar 35th birthday. They announced a new Mario Kart spinoff, a collection of classic 3D games, a special Game & Watch unit and a highly-requested Wii U port to go alongside a slew of other events. It seemed like Nintendo had finally turned a corner with their anniversary celebrations. For Mario’s 25th birthday, they released a ROM dump of Super Mario All Stars on a Wii disc and then for his 30th they released Super Mario Maker despite not intending the game to be part of it. This gave fans hope and excitement for Zelda and Donkey Kong’s anniversaries in 2021.

While a Game & Watch release is still better than the 30th anniversary which only saw an underwhelming remaster of a game Wii U owners could already play, it is still not enough. Fans got excited when rumours of Switch ports for Twilight Princess and The Wind Waker started circling recently, so seeing such a small scale celebration for such a big event is disappointing in the extreme.

To add insult to injury, Nintendo have not even marked Donkey Kong’s 40th anniversary in any way. No new games, no ports, no little trinkets. Donkey Kong was Nintendo’s first big success in gaming and saw the first appearance of Mario, yet it seems the Kong is not deemed worthy of celebration. There were rumours that the team behind Super Mario Odyssey were developing a Donkey Kong game recently, but if they are true the game will not tie into the anniversary.

Nintendo have the richest history of any developer or publisher in gaming and they are heavily reliant on that legacy. Fans want to see these anniversaries marked in a big way as opposed to damp squib. This is put into stark contrast when you see Sega releasing a remastered collection of three Super Monkey Ball games for that series’ 20th anniversary.

These lacklustre anniversaries reveal a bigger issue with the Switch which is the lack of legacy content available.

While there are the NES and SNES games available as part of the Nintendo Switch Online membership along with full-priced ports, they pale in to comparison to the Virtual Console of yesteryear. While this was a more expensive option for gamers it still offered far more games across a wider variety of systems than what we have now. Even the 3DS Virtual Console offered more variety than the Switch’s retro offerings.

Releasing more classic Zelda and Donkey Kong games won’t fix this frustration alone but it would be something extra for fans. Next year should see the release of Breath of the Wild 2 and it also marks the 30th anniversary of the Kirby series. If Nintendo wants to begin fixing the issue of legacy content, that is a good place to start.