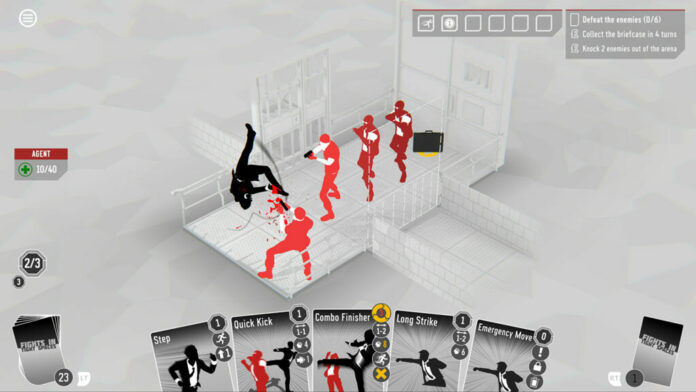 Every movie-goer loves a brutal hallway fight. From Oldboy to Kill Bill to The Raid— and even recent additions like Kingsman and the elevator scene in Captain America— there’s something viscerally satisfying about watching a slugfest in cramped areas. Fights in Tight Spaces promises the same intense experience but is executed through cards.

Fights in Tight Spaces let’s the player take control of the highly-trained Agent 11, solely tasked to eliminate organized and dangerous gangs across the globe. Each chapter contains several branching paths that ultimately lead to the gang’s leader. There are standard combat encounters, random events, and stations to upgrade your character’s health or cards— standard features for deck builders nowadays.

Where the game really shines is during its combat encounters. Agent 11 is dropped into a cramped room, like a bar or a prison cell, along with several enemies to create the very specific situation the title promised. Actions are represented through cards; standard moves like kicking and punching costs one momentum to use, which is the game’s energy or mana meter, with stronger strikes costing more. Consecutive strikes build up your combo meter which you can then use to play cards that draw from that resource, dealing a devasting finishing blow. With over 200 cards to choose from, there’s plenty of room for creativity and customization.

Unlike other games, cards aren’t thrown in isolation and recreated in your imagination. There is a physical space to navigate as well as visual feedback for your decisions. Like Into the Breach, enemies project their attacks and intentions which they execute as soon as you end your turn. All the information you need is provided and it’s up to you to slide out of harm’s way. This mechanic shift Fights in Tight Spaces into a puzzle game. Instead of only focusing on directly dealing with damage, you can also use your predicament to your advantage. You can dash away from the path of a gun letting the stray bullet hit their own teammate. You can slip away from an incoming attack and shove an enemy into a hazard, killing them instantly. Positioning is also important because there are several cards that can only trigger relative to it, such as the powerful Head Smash card, which can only work if your enemy is right next to a solid surface.

It is equally important to avoid damage and conserve health because your total life pool is retained throughout the run. Aside from that, permanent injury cards, which bloat your deck and apply negative effects, will persist unless removed from the clinic. Though you can take your time and play cautiously, the game incentivizes you to play fast and decisively. There are monetary rewards for completing side objectives like finishing the match under a certain number of turns. Cash is an important resource used to buy, upgrade, and remove cards, or to heal yourself. Without it, you’re setting yourself up for failure in the harder chapters. Thus, the secondary objectives throw a wrench in your personal plan as you scramble to adjust for those sweet rewards.

Fights in Tight Spaces don’t forget to make all this planning look cool. All cards have a corresponding animation that features meaty strikes coupled with satisfying audio feedback. The game is usually compared to Superhot due to its dispassionate removal of details, highlighting certain bright colors in a washed-out white background. The different audio tracks are also commendable due to them hitting the exact tone to denote intense action, yet not too noisy to distract you from your planning.

With creative cards, threatening enemies, and aesthetics that drips style, Fights in Tight Spaces is a worthy addition to any veteran deckbuilder’s library. It is also a great game to introduce new players to deck-builders and roguelites, as well as other gamers who were initially turned off by the genre.

The Great Ace Attorney Chronicles: What the Critics Are Saying