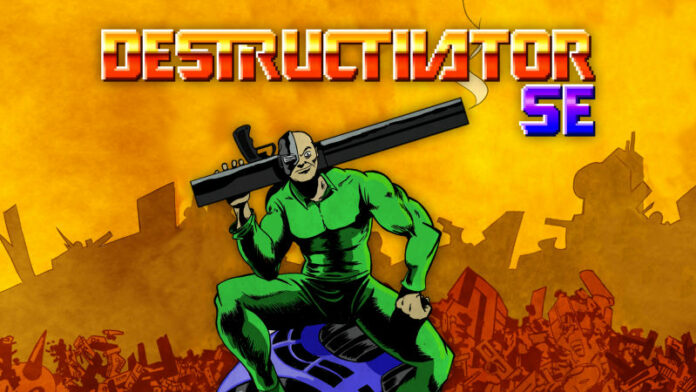 From the Sega Master System to the Nintendo Entertainment System there have been some great run and gun games with Gunstar Heroes on the Sega Mega Drive being my all time favourite even ahead of the night Contra series. Now Thalamus Digital bring a retro style game influenced by those greats. Can our Destructivator SE review seek out another classic?

You take on the role of a tiny soldier who must blast through robots, spaceships  and bosses to take on Zerkl’s defences and save Earth! Easy as that! If you are familiar with 1990’s shooters then you will instantly feel at home here although your character is small. Very, very small.

Simple Start But Don’t Be Fooled

When you start the game you have two abilities at your disposal – shoot and jump and the aim is simply this – you must kill every enemy in the level and you will get regular reminders of how many enemies are left. There is no leeway at all here. You must kill every single one of them.

Checkpoints are dotted around the levels and it is advisable to get to them as you climb ladders and go gun crazy so if you do get killed you can start from the checkpoint. For all of the simplicity though, things do start to get more challenging as you progress.

You have normal, hard and brutal difficulty settings but what I liked is that rather than the usual jumps in difficulty so many games get wrong, Destructivator SE doesn’t make things impossible but rather makes you think more about your surroundings. Don’t get me wrong, the brutal setting is brutal but you can beat it if you stop and think before setting off although I will admit that the game does make you want to set off all guns blazing.

Picking up enemy space crafts is great fun and adds to the variety running through the game and some of the boss battles are insane and will give you plenty of food for thought. When you beat the bosses the sense of satisfaction is so much that I just had to go back and beat the buggers again!

The essence and style of the game is intended to have a 16 bit, even 8 bit feel I would say and tiny is the look the developers have gone for and whilst for the most part it’s a great look, at other times it is so small it can become frustrating.

For example, the lasers that enemies fire can be so small it’s almost impossible to see them and leaves you dead and more than a bit annoyed. Added to this, the camera sits back from the main action and whilst in early levels this doesn’t cause any issues, as the game gets busier and the screen gets more packed it can be a real struggle to define just what is going on.

The sound effects also match the retro style and everything is enjoyable without becoming too annoying which can be the danger with some retro style games but the level is just right here.

At times the tiny enemies and their tiny bullets can get really frustrating but overall this is a great homage to run and gun games of the 1990’s and the learning curve is just about right. The game is without doubt a lot of fun and a real blast to play and all for less than a supermarket meal deal.

For fans I would definitely recommend adding this one to your Nintendo Switch collection.