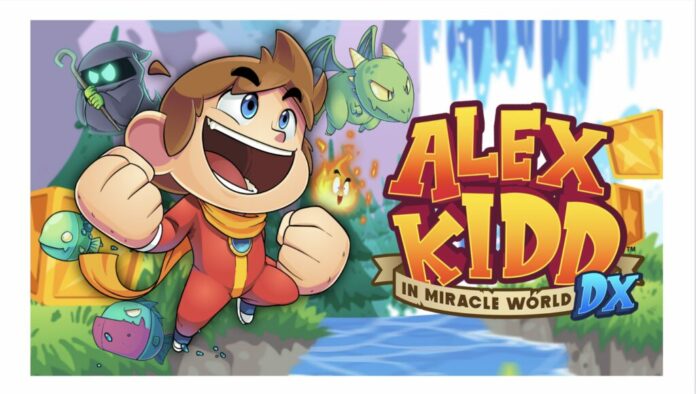 Before there was a blue blur on Sega consoles there was a little cheeky chappy who captured many a young gamers heart and now it is time to celebrate a 35 year old Alex Kidd who first appeared on the Sega Master System in 1986 which makes this writer feel rather old!

1986 – wow. I was eight years old and owned a Sega Master System 2 which I lovingly called the bread bin edition with its flip top cartridge slot and built into the system was Alex Kidd in Miracle World, a game that I would play for many hours and complete over and over again.

Punching blocks, riding a small motorbike, swimming and rock, scissors, paper were the main features of this title and on June 24th, Merge Games revived the classic game.

In conjunction with the developer Jankenteam, Merge revitalised a legend and the game is already heading towards 200,000 units sold by Christmas of 2021.

Merge Games were the distributors of the retail version of Streets of Rage 4 which has been a huge hit on consoles and it was they along with a six team development team that brought together their dream of remaking Alex Kidd in Miracle World. There was a desire to keep the feelings of the original game but bring it into the modern age.

How Miracle World Was Adapted for A Modern Audience

A retro mode allows players to play the original game with additions but with the original art style for which I still have a huge fondness. With extra content, the DX version has a wealth of additional content that expands on the original game. A new Boss Rush mode is great fun that takes Rock Paper Scissors as its main feature as well as more fluidity over the original game. Whilst I loved the original game, not hard to see that is it?, Alex was a little static at times so the added fluidity is a very welcome additional.

Managing Director of Merge Games, Luke Keighran spoke of his delight over reviving this retro classic;

“It was a pleasure to work with Sega and Jankenteam reviving this retro classic. The success of Alex Kidd in Miracle World DX has given Merge a blueprint in this niche, and we intend to continue to drive that objective and look at other potential franchises we can resurrect.”

Alex Kidd was part of my life before even Mario and Sonic and to think he is now 35 is amazing. Merge and Jankenteam have taken their own love for the game and really poured that love into the DX version which brings Alex Kidd to a new audience as well as bringing back nostalgia for us slightly more mature gamers.