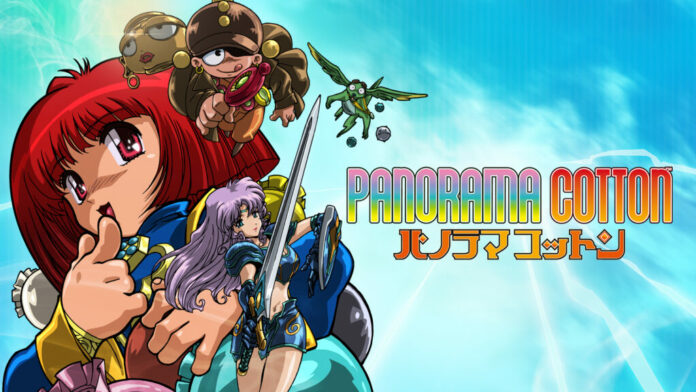 The games just keep on coming to celebrate the Cotton 30th anniversary, a series of games that never made it to these shores and the latest is the oddest of the lot. Taking a trip away from the trusted 2D side scrolling action of Cotton Guardian Force, Panorama Cotton brings an arcade 3D style shooter but how does it fare all these years later?

The first thing that struck about Panorama Cotton is the fact that the text and story has not been translated from the original Japanese which means if you have never played the series before, which is likely to be a lot of people as it was not a series that came to Europe,  you won’t be any the wiser now. Maybe it was just an oversight but it’s not a great first impression. Fear not though as I will briefly fill you in on what you need to know.

You take control of Cotton in an anime world where Silk’s sister Knit comes to tell you that Queen Velvet started saying things that make absolutely no sense at all, which is ironic considering the story makes no sense unless you speak Japanese, and the world is about to descend into chaos. The whole concept of the Cotton series has always been a touch absurd but at least we have a little bit more information on the story now.

Panorama Cotton is the third entry in the series but rather than the traditional 2D side scroller, this time we are thrown into a 3D style game where enemies come toward you, from behind and diagonally. It is a style akin to Space Harrier and the iconic Sonic The Hedgehog chaos emerald stages. It’s an on rails shooter and keeps the psychedelic style of the other games although I would warn you that if you are not into flashing graphics this might not be the game for you.

What ININ games have done is perfectly port over the game that starred on the MegaDrive and the performance of the game is spot on and even when the screen gets mega busy there are no signs of any slow down and the frame rate ticks along superbly well. Sadly as good as the 3D style would have been in 1994 there are some issues today that cause too much frustration and spoil the overall game.

It’s a Matter of Perception

The depth of perception is very confusing at times and it is hard to tell whether the enemies are coming toward you or are further away and it leads to losing life too often which makes the game less enjoyable than it should be. Also, as you control Cotton she actually blocks your view of what is ahead and the number of times that I thought I had got rid of the enemies ahead only to find there was one right in front of me was frankly beyond annoying. Whilst the port is exactly the game that appeared all those years ago, there needs to be some work to make this playable in the modern age and a trick has been missed by not doing so.

I have played and played the game and I so wanted to enjoy it but the flaws with enemies and depth are just too much and it is such a shame because in here there is a really good game that wants to burst free. If you are a fan of the series then you might well still go for this as it is a good port, but in 2021 it just doesn’t stand up and therefore outside of fans, I simply cannot recommend this one.

Shin Megami Tensei V Reviews: What The Critics Are Saying