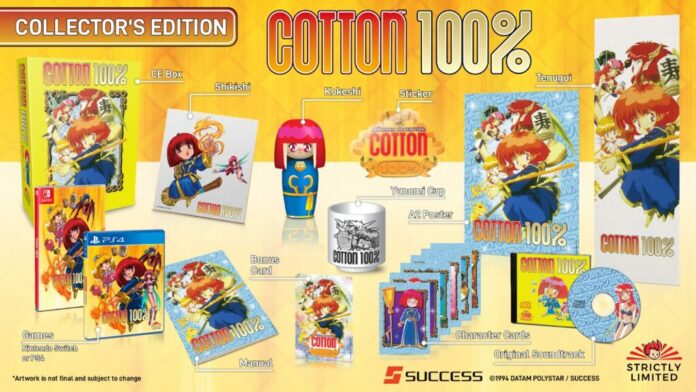 As 30 years of Cotton continue to be celebrated there is now another game to add to the list of upcoming titles and this time Cotton 100% comes to PS4 and Nintendo Switch on October 29th alongside the release of Panorama Cotton.

In what ININ Games refers to as a being a global premier, the digital edition of Cotton 100% will release on 29th October and is billed as being a perfect introduction for anyone new to the series.

For those of us who can remember the game back in 1994 then it will be a reminder of a time when a Shmup where you are on a broomstick was a sign of simpler yet superbly enjoyable times. With bright and colourful graphics and typical of the era music this was a game that had a large fan base who will be hoping that this release will be able to live up to the original.

Get Physical With Strictly Limited Games

When it comes to digital games that have now become the norm in many ways, it is good to see the likes of Strictly Limited Games ensuring collectors and physical fans can still grab a copy of their favourite titles. Both PS4 and Nintendo Switch physical editions come with a game manual – remember those? –  and both are set to retail for €29.99 with 2500 copies available to purchase on Switch and 1500 for PS4 so if you do want a physical copy you will need to act quickly.

There will also be collector’s editions to grab as well which will contain the following at a cost of €64.99;

Now, here at LWOGaming we love all things retro as regular readers will know from our popular backlog series and SLG are going even further with the release of Cotton 100% SNES PAL and NTSC compatible cartridges which will retail for €49.99. Now this is a retro treat!

Pre orders for the physical and Collector’s editions will begin at 12 midnight on October 24th CEST and will be exclusive to the Strictly Limited Games Store.

Is this a title you remember? Is it a title that intrigues you? Let us know your thoughts in the comments section and don’t forget to follow us on Twitter @LWOGaming and Facebook.You can also chat with other gamers and the Last Word team at our Discord.