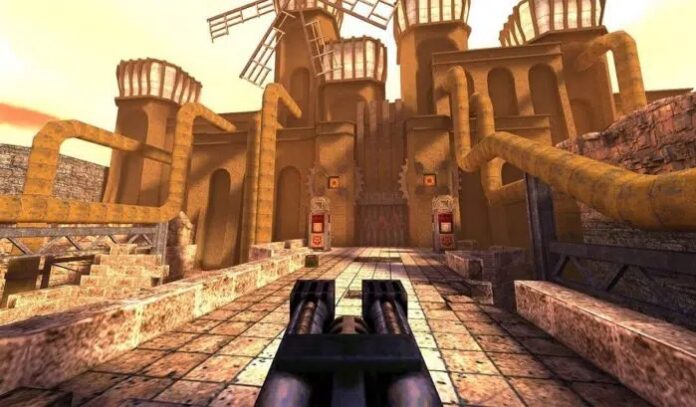 Originally released in the summer of 1996, Quake quickly became one of the most popular first-person shooters of all time. With its fast-paced, frantic action in tandem with its gothic, stylish aesthetic, this game served as the basis for many popular FPS titles to come. Originally developed by id Software, the company that built Quake from the engine of its equally popular Doom series, the former built upon the latter’s foundation in a number of ways. Now, over two and a half decades later, Nightdive Studios and Bethesda Softworks surprised gamers with a remaster of the original Quake. Released on PC, Nintendo Switch, PlayStation 4, PlayStation 5, Xbox One, and Xbox Series consoles, learn more in our Quake remaster review.

As many would expect, the Quake remaster runs at a smooth clip. It would seem that Bethesda learned from its ports of the original Doom, as well as Doom 2 and Doom 3, all of which were released in 2019. These remasterings launched with multiple shortcomings, chief among them being lacking performance on modern platforms and intrusive online check-ins. In terms of the former, the Quake remaster gets things right off the bat. Not only does the game run in widescreen, with support up to 4K depending on the platform, but aspects such as lighting, textures, and enemy models have been improved as well. Simply put, in terms of official releases, this is the best that the original Quake has ever looked.

The Quake remaster controls well, too, especially with the inclusion of gyro aiming at specific consoles. Having played the remaster on Switch, I can safely say that the use of gyro makes a difference to how the game plays. Even though this feature was present in the classic rereleases of Doom, it never felt quite right due to how the game played. In Quake, where the player must constantly be in motion and use full range of movement, gyro aiming feels more at home. When you aim at an enemy in the Quake remaster, before gyro to perfectly line up a shot, it’s a good feeling.

Performance isn’t perfect, however, at least on Switch. Specifically, many players have cited that the game’s soundtrack is either incredibly low in volume or nonexistent. Given that the original soundtrack, composed by Trent Reznor and Nine Inch Nails, is present in the remaster, it’s unfortunate that such an oversight was made. This is the main shortcoming of the Quake remaster that is in need of a patch.

More Blast for Your Buck

The Quake remaster goes for $9.99, and for the price in question, there is plenty of value to be seen here. The original campaign, including its four separate episodes, is completely intact. However, added to the package are the two official expansion packs: Scourge of Armagon and Dissolution of Eternity. The former adds three new episodes to the original game while the latter adds two. Altogether, the expansion duo brings over 30 new single-player levels, 2 multiplayer levels, new songs, and a wealth of other features. These two expansions alone are worth the price of admission.

There is more, however. Also included in the Quake remaster is Dimension of the Past, a previously released episode that was designed to celebrate the game’s 20th anniversary. It includes 10 new levels as well as a new multiplayer map. However, a never-before-seen episode, Dimension of the Machine, is also included in the $9.99 price point. This particular episode features over 10 levels and an increased enemy count, which makes it an extra challenge for Quake enthusiasts.

Following the Quake remaster’s release, there are set to be consistent mod and mission updates. Not unlike the aforementioned Doom remasters, there is a separate section for add-ons. From there, the player can choose new mods and mission packs, adding onto the base game or changing said game in entirely new ways. As of this writing, only the Quake 64 add-on is available. Expect this section to be populated with more content as time goes on.

Quake is an incredible experience in single-player, but for that consider themselves more partial to multiplayer, the remaster satiates. For those that remember the frantic, competitive nature of Quake‘s competitive multiplayer, rest assured that it has been retained in the remastered version. Players can team up to tackle the full game and its expansions, as well as compete in deathmatches, the latter of which has become the staple of Quake‘s multiplayer. In the Quake remaster, there exists bot support; this is ideal for those that lack people to play with or would simply like to practice before diving into a game with real-life people.

The Quake remaster is crossplay compatible as well, further enhancing the value of the remaster in question. Whether you’re playing on Switch, PC, or any other platform, you can pair off with and compete against anyone. Crossplay isn’t new to multiplayer games, but the fact that it’s included in a remastering of a classic FPS places a bow on an already worthwhile package. Rest assured that, whether you’re playing cooperatively or competitively, multiplayer is incredibly smooth, exhilarating, and seldom becomes old.

For those that haven’t been able to tell, the Quake remaster is an absolute must-play. It was a groundbreaking achievement in 1996, and though it has been a few decades since, the original Quake holds up from a gameplay standpoint. The remaster has retained everything that made this classic first-person shooter what it is, refining its rougher edges to make it a more polished experience in 2021. If you’re revisiting this game, as someone who played it in their past, know that it’s better than you remember it. For those that have yet to experience one of id Software’s most important FPS titles, the Quake remaster will quickly make its reputation apparent.