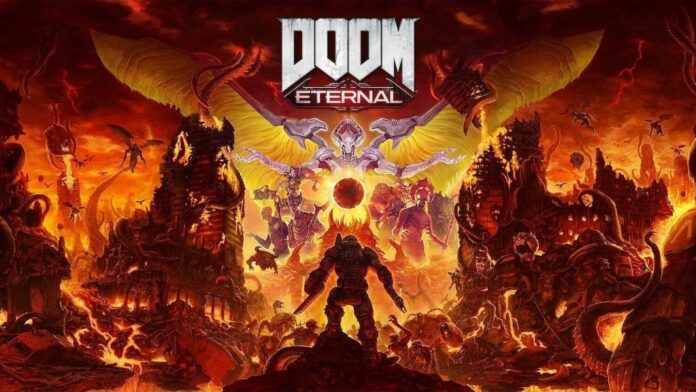 Panic Button have proven themselves to be the master of ports when it comes to the Nintendo Switch. Rocket League is a masterpiece for example but can they hit the sweet spot again? Find out in our Doom Eternal review.

On the Run and On the Gun

Running and gunning has always been the staple diet of Doom and Eternal is no different but one thing that stands out from the start are the gyroscope controls. You don’t have to use them but they really do add a hellish amount of fun to the whole experience.

What stood out for me was that rather than just having gyro controls, the developers have put everything all together meaning you can adjust aiming neatly while making your way through the monsters and demons. Everything feels neat and precise for the majority of the time.

The reason I say majority of the time is purely because at times there are dips in frame rate and this can make precise firing awkward. I have to say that overall these dips are not too frequent and Panic Button have achieved a remarkable feat with this port.

All the weapons that you are used to are here although I admit to being a little disappointed that more hasn’t been done with them such as new, huge bazookas and super machine guns but instead we have slightly souped up versions of the old favourites. That’s not to say that the upgrades are not cool because they are! The shotgun for example, as trusty a weapon as there is, now has a grapple hook – think Batman – that grabs your foes and brings them closer to you meaning that you can blow their brains away from point blank range. Perfect Doom carnage.

On the Campaign Trail

The campaign mode has plenty going for it and isn’t a million miles away from the 2016 Doom but what really stands out is the shift to a much more platform based game which I feel is a neat touch and gives the player something slightly different to focus on and helps in keeping the game feeling fresh. The aforementioned grapple for the shotgun is not the only grapple mechanic introduced in Doom Eternal and you can use another to help you climb higher meaning that you will be involved in more battles that are higher than ever before. Be warned if you suffer with vertigo. It is still very Doom but it is also innovative enough to feel like you are getting a different taste of this much loved series.

Whenever a game is brought to Switch there is always going to be a large focus on how the game performs technically compared to its larger and more powerful foes. (Not that Nintendo see PlayStation and Xbox as foes these days)

The resolution is lower at times than Wolfenstein 2 and frame rate does not exceed 30FPS but actually this runs pretty well and once again Panic Button have really delivered against all the odds especially considering that Doom Eternal was intended for next generation hardware. Getting the game to run at all on the Switch is incredible. The fact that it runs so well in the main is astounding.

There are some issues when the graphics get a little too blurry particularly in handheld mode making it hard to take out enemies and for those who have played on other systems the look may just be too much to take.

Lockdown and Target Your Friends

Where did the game modes go? Doom had some great multiplayer modes but now we seem to have been left with a pretty dull affair where two take charge of demons and another player is the Doom Slayer. It is fun for a while but it feels forced and a little like an afterthought. It is certainly not as good as the 2016 Doom in my opinion and that is a crying shame.

The combat and gyro controls make this a killer of a game and I mean that in a good way. A very good way. Everything runs better than Doom 2016 and playing Eternal on the go is truly a joy to behold, despite the obvious concessions.

The main disappointment is the multiplayer element and some of the cut scenes can feel like they will never end and don’t really add anything to the game or the story.

Overall this is an absolute gem of a game and is a superb port that every Switch owner should have in their collection!