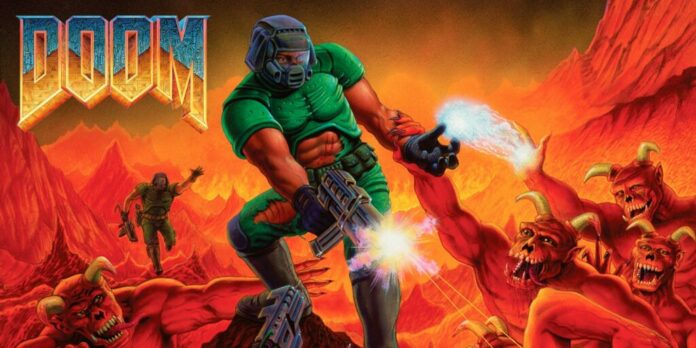 Gaming has a rich history that spans multiple decades. To this end, The Last Word on Gaming Backlog is a series that looks back on titles across all generations. From the golden 8-bit era to the landscape-changing 64-bit scene and beyond, The LWOG Backlog’s aim is history. This week, arm yourself to the teeth as you battle through hoards of demons and monsters with the “father” of the first-person shooter genre – Doom (1993).

Founded in 1991, id Software is considered among the most vital game developers. It’s difficult to believe, however, that the company responsible for the relatively family-friendly Commander Keen series would go on to develop multiple violent first-person shooter titles on PC. One of their most notable was Wolfenstein 3D, released in 1992. If this title is considered the “grandfather” of the FPS genre, then one would imagine that the original Doom, which was released the following year, is the “father” of said genre. Developed and published by id, Doom was released in 1993, originally on the MS-DOS operating system before being ported to various platforms in the following years.

Doom (1993) is an incredibly important video game, not only because of its quality but what it helped popularize. From its use of 3D graphics to its seemingly endless customization, the latter of which Doom fans have utilized to create their own mods, it’s easy to see why the original Doom is regarded as a landmark title. To this day, it can be played on virtually any machine that has, at the very least, a 32-bit processor and the ability to cast an image. How does Doom (1993) hold up? Let’s take a deeper look.

Though not historically known for its story, Doom (1993) features a narrative all the same. Essentially, the player takes on the role of an unnamed space marine; he would become the Doomguy or Doom Slayer in the years that followed. In any event, the marine is part of the Union Aerospace Corporation. This location is soon attacked by evil forces, killing anyone – and anything – in their path. In an effort to keep these forces from continuing their assault on Earth, the unnamed marine steps to the challenge, ripping through any and all demons standing in his way.

For a game released in 1993, Doom‘s story serves its purpose well. Simply put, you’re an unnamed marine whose goal is to take down demons and restore order to the universe. The marine that you play as can be violent, though he’s also heroic in his own way; it’s been noted that he assaulted a superior officer who ordered an attack on civilians. Doom (1993) provides a solid foundation for the main character that future games would build upon, including the most recent entry, Doom Eternal.

Doom is a game built upon the foundation of fast-paced shooting from a first-person perspective. If one stops for too long, they leave themselves open to enemy fire. In other words, the game constantly moves, whether the player is engaged in combat with demon hoards or looking for a keycard to advance further. This style of gameplay was incredibly innovative during the early-to-mid 90s. While it has been nearly three decades since the game’s initial release, this approach remains as energizing as ever.

Further adding to the original Doom‘s energizing combat is the array of weapons at the player’s disposal. The player starts each episode with a standard pistol. While this weapon serves its purpose in a pinch, it’s not long until the arsenal expands. Furthermore, each weapon serves a purpose. The shotgun is most effective at close range. The rocket launcher is best used to pick off groups or tougher enemies from a distance. At the top of the pack, the iconic BGF 9000 is ideal for wiping out the biggest of groups or most formidable of enemies. Doom (1993) rewards players for switching weapons on the fly, strategically using each.

Another element integral to Doom is its five difficulty levels. “I’m Too Young to Die,” for example, is seen as a newcomer’s difficulty; this presents smaller groups of enemies that aren’t as active when pursuing the player. However, the difficulty can go up to as high as “Nightmare,” which will test even the most seasoned of Doom players. In an age when most difficulty modes are clearly listed as “Easy,” “Normal,” and “Hard,” it’s clear id Software was more creative, inviting players to try difficulty modes they probably wouldn’t have otherwise.

By modern standards, Doom (1993) appears outdated. Given the litany of modern-day first-person shooters, it’s easy to see that the original Doom is from a different time. That said, its visual style was seen as cutting edge for the time. The fact that it was able to render 3D models and environments was incredible. Furthermore, its more outdated graphics, by today’s standards, actually work to its benefit in regard to modern re-releases. Whether on modern consoles or PCs, Doom runs at a smooth 60 frames per second, which makes a tremendous difference given the twitch responses the game calls for.

Where Doom isn’t outdated, however, is in its soundtrack. To say that it’s legendary would be an understatement. “At Doom’s Gate,” the theme for episode 1, map 1 is perhaps the most recognizable. It sets the tone for the pulse-pounding hoards of Hell-slaying campaign ahead. Furthermore, much of Doom‘s score takes inspiration from real heavy metal songs composed by Pantera, Slayer, Metallica, and others. The man credited for Doom‘s score is Robert Prince, who composed other id games including the Commander Keen series, as mentioned earlier, Doom II: Hell on Earth, and 3D Realms titles such as Bio Menace, Rise of the Triad, and Duke Nukem 3D.

First-time Doom players may find themselves playing through all 3 original episodes in anywhere from 10-12 hours, depending on how exploratory they are. However, seasoned players have been able to speedrun said 3 episodes in anywhere from 20 to 25 minutes. Keep in mind, however, that one’s time with Doom can be increased that much further in other ways. This is where the fan community must be praised, as its members have supported the original game, as well as Doom II, years following their releases.

Dating back to the game’s original release, there exists a bevy of fan-created WADs, an acronym for “Where’s All the Data?” Essentially, these data packs contain level information that others created. As long as a player owns a copy of the original game and has access to a source port, they can play a seemingly infinite amount of user-generated content. According to Doom lead programmer John Carmack, the decision was made, early on, to make Doom open source. This aided the community in becoming one of the most active in gaming.

Despite its age, and the various first-person shooters that succeeded it from a technical standpoint, Doom (1993) remains one of the most important video games in history. It would even spawn an entire franchise that includes everything from science fiction novels to feature films. As far as the original game is concerned, it has been preserved not only on PC but various home consoles. Less than two years, an updated version of Doom (1993), known as The Ultimate Doom, was released. This version featured the original game in addition to “Thy Flesh Consumed,” a brand-new fourth episode.

Not all versions of Doom (1993) are the same. For example, the Super Nintendo version suffers from a severe downgrade in graphics and performance. Meanwhile, the Sega 32X version lacks many levels and the existing ones have been shortened. For those that are looking to dive back into this classic or try it for the first time, one of the modern home console versions or a reliable PC source port, such as GZDoom, would be your best options.