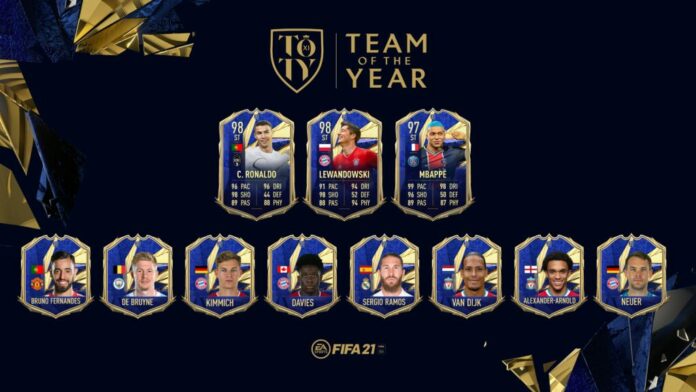 I’ve played a lot of games on FIFA this year, probably over 2000 including all my friendly games, and I’ve tested a lot of players. I can happily say however that in my team for FUT Champs I have never had Neymar, Mbappe or Ronaldo. Here is a look at My FIFA 21 TOTY.

I’m starting with the best player in the team, and the most capped. Koen Casteels is a phenomenal goalkeeper, one who I’d say is definitely the best I have ever used. Towards the end of the year, when a plethora of Wolfsburg cards were released. Nevertheless, on 7 chemistry, I never had any complaints about Casteels who was a stalwart of the club this year and it made me happier having him as a red pick that very few people probably own.

As a Chelsea fan, Reece James’ Future Stars cards were a must have for me. I even had the money to afford them after packing Alphonso Davies’ TOTY card, but I was in luck when I packed him in a player pick. The card defensively was phenomenal and worked well as both a RB and a CDM. He still holds up today as one of the best on the game.

I got Rio Ferdinand in my Icon Swaps 1 Baby Icon Pack and I was excited. Ferdinand is an unbelievable player, and I’m not surprised he stays at around the million coin range for most of the year. His one issue is that he can’t pass whatsoever, but he regularly makes up for any errors he makes.

I was surprised when I saw that Bender had only played this amount of games for me as he is a quality talent. One of the best RBs at CBs out there, he didn’t feel as small he is (6ft1in) due to great pace and ability on the ball. A shame we might not see him again in FIFA teams, with him and his twin brother Sven retiring and now playing for their boyhood club.

Before his FUT Birthday, I used Mendy’s base card and that was probably the second best LB on the game this year. His FUT Birthday was excellent on the ball, and I used him at LB for most of the year. Mendy’s best attribute is his 5* weak foot and his passing was key, either down the line or into the middle of the park

7 games played and Acuna is one of the most outrageous cards I have used all year. 5* 5* and no face stat below 94, he is quite simply ridiculous on the ball. I’ve always liked an Acuna card, using his FUTMAS card last year as well.

Possibly one of the best value SBCs all year, Rooney was class at CDM this year, as he had this great ability to pick a pass, and occasionally pop up for a goal. It’s sad that you can now get him for free, but despite the fact I wasn’t the biggest fan of him in real life, being a Chelsea fan, his final FIFA card was absolute quality.

Oooooh it’s an equaliser is what I got to whisper every time I scored with Harvey Barnes, regardless of whether or not it was an equaliser. An unbelievable card and central CAM and LW, Barnes was one of the best attackers I used this year and still fits the meta with his high agility and balance alongside some lethal finishing.

I reviewed Jamie Maclaren for the site a couple of months ago and I will stand by the fact that he is the most underrated card on FIFA this year. 5* weak foot makes him absolutely outrageous. Perhaps the fact that no one is expecting him to be any good makes him even better.

When the game first started, Timo Werner’s gold card was unbeatable. About 6 months later, for me he was still unbeatable. He now has a brilliant 93 rated Showdown card, but nothing will compare to his regular gold card for me. Strong, fast, lethal. Next year he will be purchased once again!

I’d used Torres’ Baby and Mid Icon cards before getting his Prime in a player pick, turning him down, and then packing a tradeable version of his Prime Moments card. My god what fun it is to play with you favourite player on the game. Fernando Torres is truly outrageous and it was sad to not have him on last year’s FIFA. A positive goal to game ratio and a whole bunch of assists, he was truly the best player I have used this year.

Players Who Deserve a Mention

There are a whole smattering of players who made a great impact on the club and I thought were very special but didn’t do enough to make the list. They include: Bradley Dack Squad Foundations, Bukayo Saka Future Stars, Jorginho Summer Stars, Martin Odegaard What If, Adam Armstrong What If, Nordi Mukiele Rulebreakers and Storyline Christian Pulisic.

FIFA 21 may not have had the best gameplay, but it gave me many cards to remember for my FIFA 21 TOTY. Bring on FIFA 22!

The FUT Birthday Promo Is Here