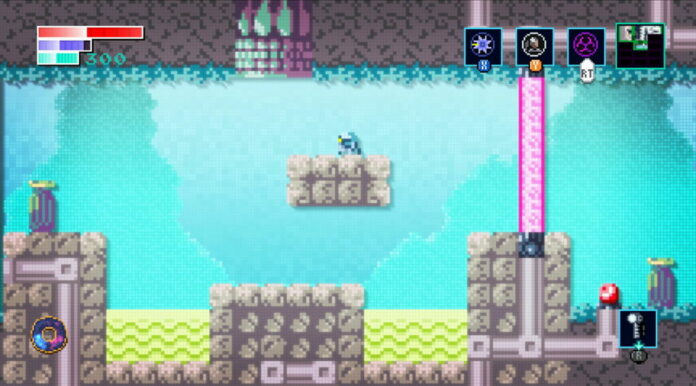 Originally released in 2015, the first Axiom Verge was what could best be described as a Metroidvania indie game success. Developed and published by Thomas Happ Games, this was a pixel art romp that was heavily inspired by Nintendo’s Metroid series. From its focus on exploration to its unique gameplay element involving glitches, Axiom Verge was heavily praised, even being nominated for Best Independent Game at The Game Awards 2015. Since then, the first Axiom Verge was released on multiple platforms and even saw its first piece of downloadable content released earlier this year. It was in 2019 that Happ announced that Axiom Verge 2 was in development. Since then, the game saw multiple delays, with Happ stating that it would “be better for the additional time.” On August 11, the game unexpectedly dropped on the Nintendo Switch, PlayStation 4, and PC; a PlayStation 5 version is set to launch at a later date. Once again, Happ himself was at the helm of everything from game design to composition. How does this long-awaited sequel hold up? Learn more in our Axiom Verge 2 review.

The Story and Lore of Axiom Verge 2

Even compared to its predecessor, Axiom Verge 2 is incredibly story-heavy. The main character is a woman named Indra Chaudhari, the owner of the Globe 3 conglomerate. The game begins with her arriving at a snow-covered base in Antartica. She is searching for her daughter, who was kidnapped following Indra’s acquisition of one of her company’s competitors, Hammond Corp. Soon enough, she develops the ability to absorb abilities from Arms, which are nanomachines. With these, she must find her daughter, escape the new world she finds herself in, and uncover the mysteries of the world in question.

While the story itself isn’t critical to Axiom Verge 2‘s success, it serves its purpose in encouraging the player to move forward. Indra is a strong, relatively no-nonsense protagonist and her interactions with the game’s various characters are grounded. However, further lore can be found throughout the game. By discovering scattered documents and accessing different terminals, the player will learn more. Axiom Verge 2‘s story is incredibly layered. It’s fair to say that, unless you pay close attention, not everything will be one-hundred percent clear during your first playthrough.

Like most games in the Metroidvania genre, Axiom Verge 2 is partially built on combat. Early in the game, Indra starts out with a simple pickaxe, which is fine for breaking crates but less than ideal for battling the game’s various threats. However, as the game progresses, the player will find their arsenal slowly but surely expanding. From a combat standpoint, Axiom Verge 2 feels like it starts slower than its predecessor, though patient gamers will eventually see just how evolved the combat is. Outside of hand-to-hand and ranged combat, Axiom Verge 2 allows the player to hack enemies.

With the use of an item known as the Musshus, Indra can infect enemies and objects to modify how they behave. This becomes especially prevalent when confronting enemies. For example, instead of simply facing an enemy head on, the player may hack into their behavior. By doing so, said enemy will either attack slower or fight for Indra as a temporary ally. This allows a greater freedom of choice, even if Axiom Verge 2 isn’t terribly difficult. In fact, by default, it’s a fairly manageable experience. However, via the Accessibility option, the player can modify such variables as enemy and player damage. This allows one’s experience to be entirely their own.

A Graphical and Auditory Treat

For those that were fans of the original Axiom Verge‘s art style, rest easy knowing that its sequel retains what made it work, building upon it. The first game looked incredible, taking heavy inspiration from the acclaimed Metroid series. Its color palate was subdued, placing the player in mostly dark and dreary environments. This isn’t the case for Axiom Verge 2, which uses a more expansive color palate. Graphically, snowy tundras feel isolated, wooded areas seem alive, and every environment is incredibly detailed.

Axiom Verge 2 is just as much a treat for the ears as it is for the eyes. The opening title theme, entitled Omni, gives off a sense of adventure that motivates the player to start a new game or continue their adventure. Monsoon, which is one of the few tracks accompanied by vocals, adds to naturesque atmospheres, making the adventure feel that much grander. As mentioned earlier, Happ was back at the helm of composition; not unlike his work on the original Axiom Verge, he excelled in the sequel.

Exploration Is a Puzzle

The other critical element of the Metroidvania genre is explanation and, unsurprisingly, Axiom Verge 2 thrives in this regard. The core map itself is rich, filled with secrets and collectibles waiting to be uncovered. One of the thrills of the aforementioned genre is encountering inaccessible areas, only to later return to them with a specific item or skill that allows the player to travel further. Axiom Verge 2 has many of these moments where the proverbial light bulb goes off in the player’s head, each revelation nothing short of rewarding.

Another way in which exploration in Axiom Verge 2 feels rewarding is how the player traverses between two separate maps. By utilizing Breaches, Indra can access an alternate dimension of the world she’s in. This dimension is accessed through a drone she acquires in the game. By using this drone, the player can navigate maps and solve puzzles, providing a deeper level of strategy. Axiom Verge 2‘s strengths lie in its exploration; hopping between dimensions and figuring out solutions to problems that go beyond the surface never becomes old.

Thomas Happ clearly set out to make Axiom Verge 2 a familiar yet fresh sequel. While players of the original game will feel at home upon taking their first steps in the Antarctic, it quickly becomes evident that this is an entirely new adventure. Axiom Verge 2 builds upon what its predecessor established in various ways. The combat may not be overly challenging or deep. Nonetheless, this doesn’t take away from the overall experience that the player will gain. For Metroidvania enthusiasts, in particular, this is well worth your investment.