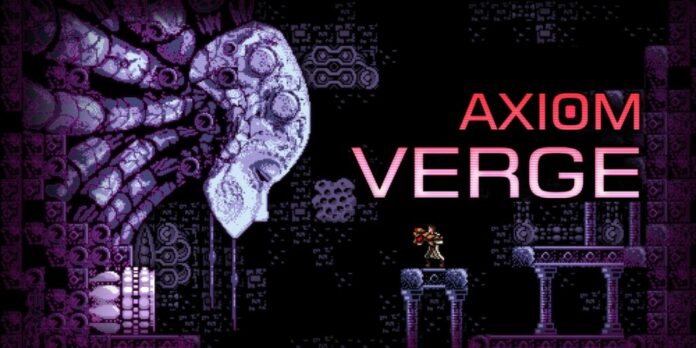 Earlier this week, a blog post was published on the official Axiom Verge website detailing the game’s first free content update. Released in 2015, Axiom Verge is a Metroidvania title developed and published by Thomas Happ. This title places the player in the role of Trace, who explores an alien world filled with unusual, dangerous threats. It received ample praise from gamers and publications, not to mention a nomination for Best Independent Game at The 2015 Game Awards; this award was ultimately won by Rocket League.

In the aforementioned blog post, Happ revealed the title’s first-ever free content update: Randomizer Mode. Inspired by the speedrunning community of Axiom Verge, Randomizer Mode takes the player through the game with areas being customized in a sophisticated fashion. Happ mentioned that weapons and characteristics will be smartly distributed so that the player can access later areas. Levels will know which items players have; thus, they will be tailored based on such variables. While one playthrough will provide Trace with a strong weapon at the onset, another playthrough may require deeper exploration for the same item.

Axiom Verge’s Randomizer Mode allows for different progression logic options, too. “Beginner,” for example, is designed for those that may be approaching the game as if it were their first time. “Advanced” is geared more toward speedrunners, allowing for opportunities to take advantage of exploits to progress faster. “Masochist,” as the name suggests, places the player in a high-risk environment where getting to the end in the shortest time is the name of the game. Other options are available for those looking to customize their Axiom Verge experience further.

Currently, the Axiom Verge Randomizer Mode is only available via the Epic Games Store and Steam. For these options, the player will have to access the beta options. However, Happ revealed that it will be released for free on consoles in due time. In addition to PC, Axiom Verge is available on PlayStation 4, PlayStation Vita, Wii U, Xbox One, and Nintendo Switch.

Currently, there is a sequel to Axiom Verge in the works. Known as Axiom Verge 2, this sequel was originally planned to release on Switch this past fall. However, it was pushed forward to the first half of 2021. While fans await Axiom Verge 2, the inclusion of a Randomizer Mode should entice fans to revisit the original game.

The original Axiom Verge was one of the most well-received Metroidvania titles of the 2010s. Featuring a retro aesthetic, it placed the user in an immense world where they had to traverse dangerous areas and battle fearsome threats. However, up until recently, Axiom Verge’s meat and potatoes were in its main campaign. The inclusion of the Randomizer Mode will not only encourage fans to take the original game for another spin but prepare them for the sequel set to release later this year.