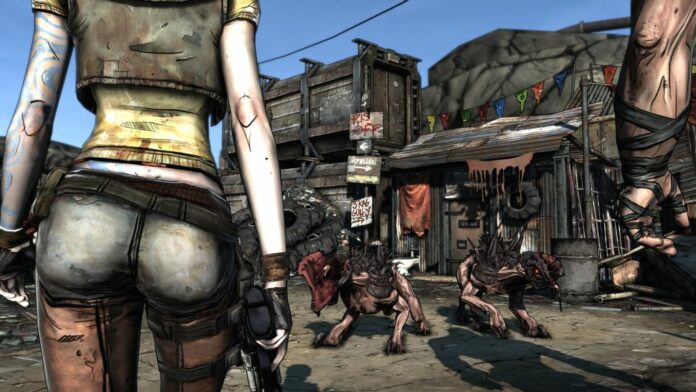 Gaming has a rich history that spans multiple decades. To this end, The Last Word on Gaming Backlog is a series that looks back on titles across all generations. From the golden 8-bit era to the landscape-changing 64-bit scene and beyond, The LWOG Backlog’s aim is history. It’s time to gear up for a trip to the planet Pandora as we take a look at Borderlands (2009), which kicked off an incredibly popular series.

Conceptually pitched as “Halo meets Diablo,” the first Borderlands game was a landmark title. Bringing roleplaying game elements into a first-person shooting and combat environment, this title spawned a series that would capture the imaginations of gamers across the world. The game’s development dates back to 2005 and only became more refined since. Borderlands, initially released in 2009 for the PlayStation 3, Xbox 360, and PC, was developed by Gearbox Software and published by 2K Games.

Gearbox Software was perhaps the best development team to take the reigns on Borderlands (2009). Prior to this, they worked on the Dreamcast port of Half-Life, which would be reworked for the PlayStation 2. They were also responsible for the PC port of Halo: Combat Evolved. Needless to say, they had experience in the first-person gaming sphere. What began as a gritty-looking adventure game, however, took on a more colorful presentation. This was due to concerns that the early build of Borderlands looked too close to more realistic first-person titles including Fallout 3, which was released one year before Borderlands.

Since its initial release, Borderlands (2009) found its way onto various platforms. In fact, if you have any of the eighth-generation platforms, you can download this, as well as other titles in the series, at your leisure. Over a decade later, how does the original Borderlands hold up? Is it worth revisiting or experiencing for the very first time? Here’s what to know.

Borderlands (2009) takes place in the distant future of 2864 AD. The Atlas Corporation uncovered a location simply known as the Vault, said to contain advanced weaponry and technology. This would lead to other corporations attempting to unearth weapons and materials. Patricia Tannis, one of the main characters of the game, discovers that there is a Vault on Pandora, which is where the game takes place. As one of four “Vault Hunter” classes, the player’s objective is to traverse the dangerous wasteland of Pandora, facing bandits, wild beasts, and other such dangers to uncover the Vault in question.

One of the reasons why Borderlands‘s story stands out is the cast of memorable characters. From its mascot of sorts, Claptrap, to the medically uncertified Dr. Zed to even the four “Vault Hunter” classes, the personalities of the characters shine through. Furthermore, Pandora is a sizable landscape, each location different from the last. It never feels boring to move from point A to point B, which helps the story become that much more gripping. Borderlands isn’t without its twists and turns in the narrative, either, though these are best left to be experienced rather than told.

Equal parts action RPG and first-person action game, Borderlands (2009) isn’t so much about marksmanship or brute strength but rather character building. At the start of the game, the player is given a choice between four character classes, or “Vault Hunters” in this case. For example, while Roland, “The Soldier,” is skilled with combat rifles and shotguns, Lilith, “The Siren,” has her strengths in elemental weaponry. A different approach will be required for each character class, meaning that depending on who the player chooses, Borderlands will feel like a unique experience each time.

Like many RPGs of this nature, Borderlands is heavy on loot, especially concerning weaponry. It’s been said that more than a few hundred thousand different guns are available, which is staggering, to say the least. Furthermore, each weapon has unique attributes, including zoom-in percentages and elemental effects. These attributes make experimenting with different weapons, even those that don’t seem stronger than current weaponry on the surface, beneficial. The sheer amount of loot available is one of the defining traits of Borderlands.

Speaking of defining traits, Borderlands was designed for both single-player and online co-op multiplayer. The latter is where the game truly shines, as anywhere from two to four players can work together to tackle quests, defeat enemies, and even become involved in one-on-one duels if desired. Traversing Pandora with other players is nothing short of gratifying. While the game is still fun solo, its true potential shines when two or more “Vault Hunters” work together.

Despite the crude nature of Borderlands (2009), the game itself is surprisingly colorful. Its cel-shaded aesthetic provides an art style all its own. Furthermore, it ensures that the game’s visuals won’t age; even more than a decade following its release, Borderlands holds up from a graphical standpoint. This would be the main art style the game would uphold in subsequent titles, too. The contrast between the game’s cartoony style and the mature nature of the game itself is nothing short of interesting.

Borderlands has a solid soundtrack, too. The game’s opening cinematic, which is accompanied by “Ain’t No Rest for the Wicked” by Cage the Elephant, may be one of the best introductions for any game. The rest of the game’s composition, although not as memorable by comparison, still serves its purpose. The four names credited for the game’s soundtrack are Sascha Dikiciyan, Cris Velasco, Jesper Kyd, and Raison Varner. They would also compose future titles in the Borderlands series.

Borderlands (2009) is incredibly substantial, even in terms of the base game. Don’t be surprised to see yourself spend over 15 hours on the main game, specifically if you tackle each side quest. This is just for a single playthrough; consider how much more time will be spent if you play as other “Vault Hunters,” experimenting with different combat styles and creating unique character builds. The various DLC packs can effectively double one’s playtime, too. If you’re looking for an action RPG that will keep you hooked, the first Borderlands is a safe, confident bet.

Borderlands (2009) received largely universal praise following its release, including an Editor’s Choice Award from IGN. Furthermore, four pieces of DLC followed its release, expanding the game’s world and implementing new quests and scenarios. The first Borderlands would find its way onto other platforms in the years that followed; currently, those that own the PlayStation 4, Xbox One, or Nintendo Switch can purchase or download the Game of the Year Edition of Borderlands, which includes the aforementioned DLC.

This doesn’t even begin to include the subsequent Borderlands titles that released afterward, refining the formula that the original game established. The first Borderlands was an incredible achievement for Gearbox Software. Outside of Duke Nukem, Half-Life, and Aliens, Borderlands may be the most iconic series it has developed games for. While it may not be the best title in the series, as a whole, the original is worth experiencing all the same.