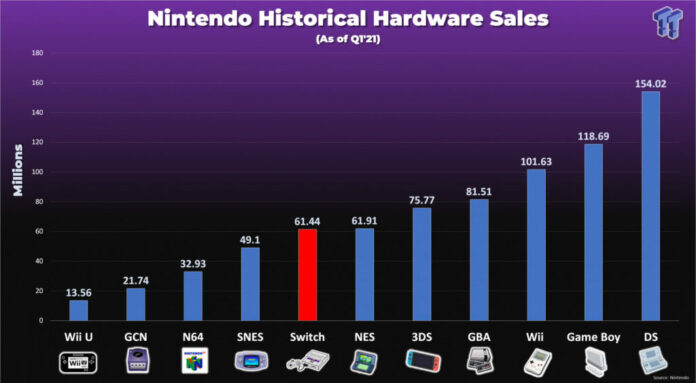 As first reported by Famitsu the Nintendo Switch has now sold over 20 million units in its home region of Japan.  The console has been completely dominating in Japan with each weekly sales chart occupied by nothing but Switch games and the console itself has lapped the PlayStation 5 and Xbox Series X which only released in 2020.  This news puts the Nintendo Switch clear of the PlayStation Portable as the fifth highest-selling console in Japanese history.

Sales Not Slowing Down

It seems likely that the Switch will eventually surpass the PlayStation 2, which sold 21.5 million units, which would make it the fourth highest-selling console in the history of Japan.  This would lead to the top four selling consoles in Japan all being manufactured by Nintendo as the Switch would be behind the Nintendo DS, Nintendo 3DS, and the Game Boy/Game Boy Color.

It is almost becoming tedious to throw plaudits at the Switch but the console is truly Nintendo’s newest juggernaut.  Passing 20 million unit sales in Japan alone is a milestone reserved for only the greatest consoles in history and the Nintendo Switch is still going from strength to strength meaning it may even pass the Nintendo 3DS in time and become the third highest-selling console in the history of the region.  Some are even speculating that the Switch may eventually pass out the Wii in global sales.

While it is unlikely we see the Nintendo Switch alone hit the heights of the original DS or Game Boy consoles it will stand as the greatest selling home console in Japan’s history, a record it more than deserves.  With the Nintendo Switch Pro rumored to be on the way soon, it will be interesting to see if the upgraded console dampens the original Switch’s selling power or if Nintendo can strike a balance and have both sell well in the manufacturers key region.