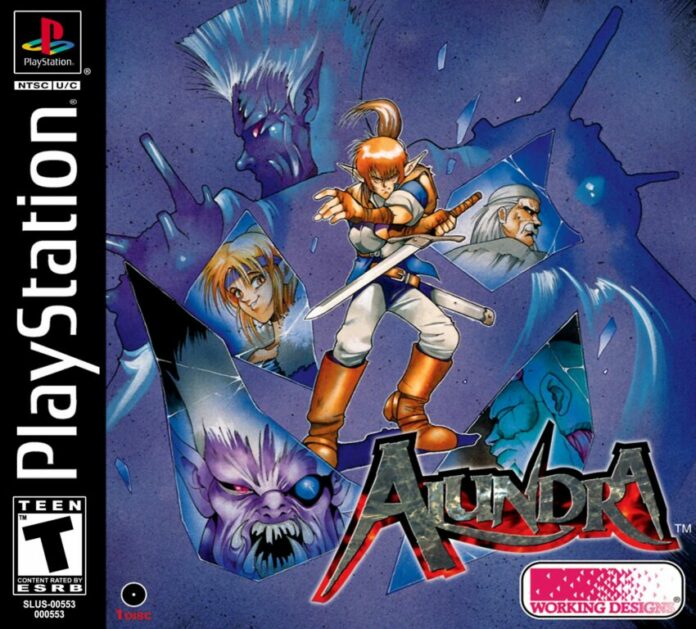 Published by Working Designs and developed by Matrix Software for the Playstation One, Alundra is an action-adventure puzzle game similar to the Legend of Zelda series. Released in North America on January 8th, 1998, the game was very well received by reviewers and gaming sites. Metacritic rated the game 86/100, which was best for the sixth-highest rated Playstation game of 1997. GameRankings gave it an 84, making it the highest-rated action-adventure title of 1997. Alundra was made downloadable on the Playstation Store for the Playstation Three. Its successor, Alundra Two, was released on March 21st, 2000, but was not received well due to not having any ties to the original and suffering from bad game mechanics.

Don’t Fall Asleep Or The Boogeyman Will Get You

Meet Alundra, a young man who ends up shipwrecked on an unfamiliar island after receiving a message from an unknown entity named Lars, and a warning from an imposing being named Melzas. Our young protagonist is eventually rescued by blacksmith Jess, who introduces him to the unique and varying residents of Inoa. After town residents began falling ill from their nightmares, Alundra and newly acquainted scholar Septimus discover that the protagonist is descended from a race of dream walkers known as the Elna. The duo discovers a much darker plot and must work together to save the residents of Inoa and defeat the evil alien Melzas in order to return peace to the town’s residents.

One of the most fun and expansive games I’ve gotten to play on the Playstation One, Alundra has something for everyone. It starts off as a hack and slash style game in order for the player to get adapted to the controls. However, the gameplay quickly advances into a more strategic, challenging battle system with the introduction of new weapons. Bombs, flails, arrows, and more have their own advantages and disadvantages, which caused me to plan out my attacks better. Bombs are powerful but take time to go off and flails can knock enemies back and can be used from a distance.

Puzzles, oh the puzzles….this is what makes Alundra the classic it is. Players will get frustrated at times with the difficulty levels between each puzzle, but I felt a strong sense of pride and accomplishment for completing them. Also, the rewards for completing them are worth it, not just for plot progression, but also for items you receive. The biggest challenge is the hunt for the 50 Gilded Falcons, and when I say hunt I mean hunt. They are permanently missable since certain dungeons are closed off for area upon completion. The rewards from the collection of all of them are game-breaking, you can use magic infinitely, gain more health units, or have infinite health recovery as long as there is no movement.

Ambiance That Will Give You Nightmares

Every dream you enter, with the exception of one, begins with a woman’s loud and terrifying scream. Then the pace slows down to mimic a heartbeat, and then the tempo rises and rises, emphasizing fear and nervousness. The first time I encounter this I turned all my lights on and tried to avoid playing it at night. This may not be good for people who have anxiety, so that is something to consider. In fact, if you currently suffer or have suffered from serious mental health issues, be prepared for what you may experience or take a pass on this game.

For an anime-styled game, the story and the music bounce from humorous and cute, to scary and fear-inducing quickly. I personally found this refreshing, as not many games action-adventure/role-playing based games took to darker themes like Shadow Madness for example. People in this game the player gets attached to die, not just in their sleep, but also in cold-blooded murder. Sybill, a character Alundra becomes close to and assists, has her neck snapped and her body dumped in the middle of Inoa square. Jess, the man who found and nursed the protagonist back to health, is found murdered in a graveyard.

Alundra is a multi-faceted style game that is considered by some gamers to be a classic. I can’t disagree with this assessment at all. Even though it is very similar to Legend of Zelda, there is plenty of unique and differing aspects that allow it to stand on its own two feet. You will not regret playing this game, as it has something for everyone. I give Alundra, for the Playstation One, a solid 10/10.