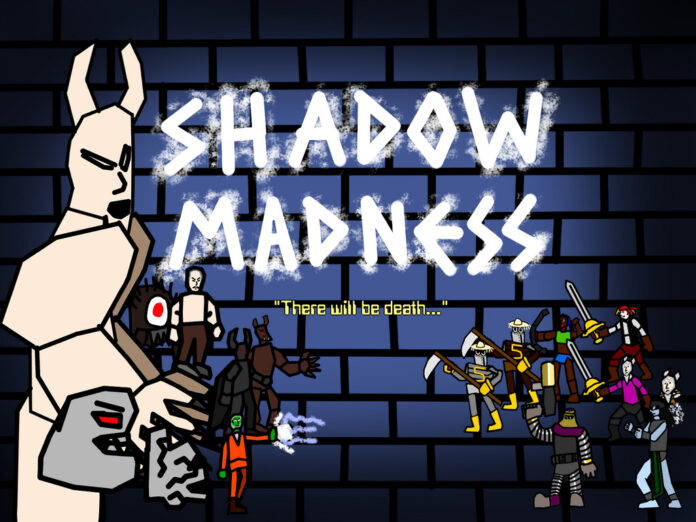 Shadow Madness was released in North America on June 1st 1999, and Europe on February 25th, 2000 for the Playstation One. Developed and published by Crave Entertainment, Shadow Madness is a tactical RPG with a real-time battle system. Upon its release, the game received mostly mixed reviews from various video game sites.

A mysterious disease has spread across the world causing monsters to appear, towns to be destroyed, and people being driven to madness by their own shadows. Mysterious craters have appeared in destroyed cities, birthing monsters. A young man named Stinger arrives home to discover his village destroyed and overrun with monsters. After surviving an encounter with monsters, Stinger meets Windleaf whose village was also destroyed. Together, along with third party member Harv-5, the trio must traverse the lands in order to discover the cause of this sickness, and figure out how to stop it before it’s too late.

The main story is a cliche in terms of the hero saving the world against all odds archetype. However, the mix of adult humor and dark overtones create a uniqueness to Shadow Madness that was not seen by too many Playstation One RPGs. A reason for this is probably Shadow Madness being an American-made RPG as opposed to JRPG’s that usually have more light-hearted and anime designs. Each character has their own unique personality, which creates interesting dynamics between party members. An example of this would be Stinger being an antihero hero archetype who eventually develops heroic attributes such as courage and selflessness. Windleaf is the strong female lead who is very moral and selfless but can show naivety that is seen in many typical hero/heroine characters. Character stories are fleshed out well as seen in Harv-5’s journey from being a harvesting robot to discovering his royal heritage and past.

Each battle is fought in a 3D environment with three characters on one side and multiple monsters on the other. The battle system is straightforward with each character able to do a weak, normal, or strong attack. The difference between characters is that some can use magic attacks and are better at long-range. After advancing a certain amount of levels, a character can change classes, starting back at level one but with higher attributes.

The class system is interesting but is very possible to miss if the player is not paying close enough attention. You won’t get notified of the class change unless you’re constantly looking at the character screen. It is also very easy to find a spot early enough in the game to grind to max levels, even on hard difficulty.

The controls are very straightforward and easy to learn. Each button on the Playstation One controller functions for different aspects of the menu system. Pressing an assigned button will bring up the item, status, or magic menus outside of battle. In battle, the X button confirms whether the player wishes to attack, evade the enemy, flee the battle, or pass their turn for example.

Shadow Madness takes a big hit in graphics. The cut scenes are well done, but the overall design of characters and monsters is average. Character portraits are okay, but the character models are unable to express facial emotions or emphasize feelings without words. New armor and weapon designs are not represented, so each character will always use a generically designed weapon. Monsters can become repetitive with the palette and name swaps. The 3D fighting backgrounds are average and create a sandbox feel.

The music is very dark, foreboding, and eerie. There is always a sense of doom or danger around the corner, which is befitting for a world going through a mysterious plague. There are places with peaceful music, however, symbolizing a small chance of hope and success for the heroes. An example of this is Forestgrove where the land has been untouched by evil or darkness. There is enough variety in the music that you’ll never find the beats repetitive or agitating. There are multiple battle themes for different areas of the world.

Shadow Madness’s dark, adult story and humor are refreshing to see in an RPG and cause it to stand out among its’ peers. The game loses points for graphics and a clunky battle system, unfortunately. Shadow Madness; however, is still a hidden gem for those looking for a different experience RPG-wise. Shadow Madness gets a 6.5/10.