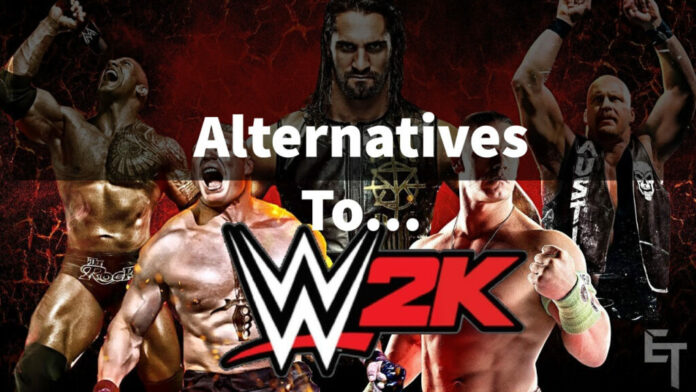 Ever since the release of TNA IMPACT! in 2008 the wrestling video game market has been monopolized by the WWE.  Unfortunately, this also coincided with a steady decrease in the quality of WWE video games with many popular game modes falling by the wayside, being replaced by poorly fleshed-out game modes that feel hollow.  Add in the graphical issues, bugs, and the tedious style of gameplay and WWE games have steadily become a chore to play that have gotten worse and worse reviews as time went on.  Fortunately for wrestling fans, the WWE is no longer the only game in town as far as wrestling video games go and in this article, we will take a look at some wrestling games that you could be playing instead of WWE.

Whether it be on your phone or Nintendo Switch MDickie has a whole host of wrestling games for fans to play.  Wrestling Empire releasing on the Switch was the first time MDickie brought a game to a major console and it provides an alternative to WWE games for Switch owners.  All of the MDickie games be it Wrestling Empire, Booking Revolution, or Wrestling Revolution are a vast departure from modern WWE games.  They willingly throw realism out the door in favor of embracing the wacky world of pro wrestling and leaving the rest to your imagination.  These games aren’t for everyone but if the buggy realism of WWE has turned you away and you just want to pull out a One Winged Angel from the top rope through a flaming table then this is the game for you.

Total Extreme Wrestling, formerly Total Extreme Warfare, and even further back known as Extreme Warfare Revenge are a series of games released by Adam Ryland through Grey Dog Software.  The PC releases put the player in charge of wrestling promotions.  You sign talent, put together matches, put together storylines, and attempt to put on the best show possible based on your product aims.  These games are for the hardcore wrestling fan as they’re purely text-based simulators that allow you to run your own promotion.

There have been periodical additions to the series every couple of years with the latest being TEW 2020, which followed TEW 2016.  Each version is very different with some adding layers of complexity while others are more basic and accessible.

The best thing about playing any of Ryland’s releases is the modding community behind it, Rylan encourages the use of mods in his games which only adds to your enjoyment.  Want to re-do the Attitude Era? there’s a mod for that, want to see if you can compete with Hulk Hogan and the Rock and Wrestling connection? there’s a mod for that, want to play in a fantasy world developed by a dedicated modder? there are mods for that!  The potential for fun in TEW is almost endless and if the idea of running your own promotion and building your own global megastars sounds appealing then you should jump right in and play.

If your heart yearns for the basic arcade wrestling games of old then RetroMania is the game for you.  It is an homage to games like WWF WrestleFest by taking the art style and mechanics from those games and plonking it into the modern wrestling scene.

While this may be a niche game it is the perfect “pick up and play” arcade game that many people loved to play in their youth. This game is available on Xbox as well as Nintendo Switch and PC, it will also be coming to Playstation 4 soon.

Fire Pro Wrestling is probably the biggest alternative to WWE games that there is.  Their latest release, Fire Pro Wrestling World, released on major consoles and partnered with New Japan Pro Wrestling and Stardom to bring people’s favorite wrestles from Japan to the video game world.

Fire Pro Wrestling is definitely a game you’ll either love or hate, it works with timing-based controls and forces you to wrestle with a realistic strategy as going for your big moves too early will see you eat defeat.  It’s story mode is hit or miss with some things just happening and never being followed up on while you can spend four of five straight matches working multi-person tag matches and standing around on the apron for the vast majority of the match.

Where Fire Pro Wrestling excels is with some of its add-ons as well as its creative community.  Thanks to players all over the world you can add basically any wrestler you want from throughout history to your game and watch crazy dream matches play out in front of your eyes.  Add in the fact that Fire Promoter is the GM mode fans have craved for a decade now and you have a game that could hit the sweet spot for any fan of wrestling games.

Journey Of Wrestling is a free game that you can play in your browser.  It’s like a stripped-back version of TEW.  You are put in charge of a company but your sole aim is to book shows and advance storylines.

The crew behind this are constantly updating the game and you can unlock even more gameplay options if you do decide to support them monetarily.  Much like TEW the fun in this one is about running your own shows and trying to be the best, although this is a much more accessible, if less detailed, game.

With AEWGames on the scene and alternatives like those listed above wrestling games are only going to get better and better.  It is a great time to be a fan of both professional wrestling and video games with so much variety on offer.