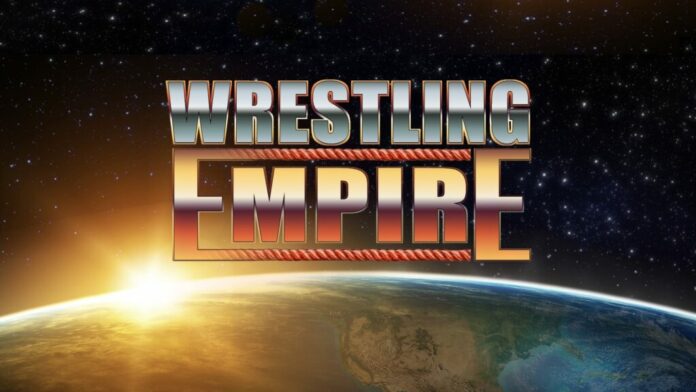 The world of professional wrestling video games is in the midst of a shake up as WWE has gone from the only game in town to now having competition from AEW Games, RetroMania Wrestling, and now we have MDickie throwing his hat into the console ring with Wrestling Empire.  MDickie has built a reputation in wrestling circles for his previous wrestling releases which were focused on PC and Mobile devices.  Now Dickie makes the jump to the Nintedo Switch with his wrestling franchise.  We’ve bought the game (which is currently on SALE on opening week) and decided to review what is available.

Wrestling Empire sees the beloved Wrestling Revolution game make the jump to the Nintendo Switch console.  For years now MDickie has been producing some of the most fun wrestling games available as he took what made the early SmackDown vs RAW games fun and turned it all up to eleven.  With the jump to a powerful console like the Switch, this game has the opportunity to iron out some of the kinks that could pop up on the mobile versions.

This game plays exactly as any long-time fan of the series could expect.  It is chaotic in every sense of the word.  Within the first 3 months of our wrestling career, we’d seen tables set on fire, referees exploding, hectic 10-man tag action, and so much more.  There’s always something going on be it in the ring or out of the ring.

The game also has a lot happening outside of the squared circle as you make interview appearances and have to answer questions about your career, negotiate contracts with promotions, and occasionally you will be approached by a fellow wrestler asking for a match or to team up.  Everything you do backstage has an impact on your career so you have to choose each step wisely.

The matches themselves are very enjoyable and have an addictive nature to them, because they’re often so short you’ll think to yourself “just one more match won’t hurt” and you’ll still be playing an hour later.  They are occasionally frustrating as tag matches can be incredibly long and submissions are occasionally instant defeat no matter your health but overall they’re enjoyable.

What we would say is that this is not the game to play if you want to be the next Goldberg or Asuka and win hundreds of matches in a row.  This game throws realism out the window and you WILL lose at some point to some zany scenario and you have to be willing to deal with the fallout of defeats just as much as the glory of victory

The character customization options are deep as you can customize every single move and gesture your character makes.  We didn’t dive in to this fully yet as bookers will change your look and gimmick at will until you earn creative control in your contracts but once we have that available to us we will go all-in on creating the perfect character.

The controls are very easy to learn with the four buttons on the right joy-con utilized to wrestle while other buttons are used to move or tag.  The controls are always accessible via the pause menu although it doesn’t explain how to tag which can lead to some panic when you first play.  This isn’t even a case of “easy to learn, hard to master” the controls are just very basic and accessible to new players.

WWE2K this is not.  The game’s characters are shown in all their 64-bit glory but that animated, retro vibe fits the game very well.  Realistic character models would be very out of place in the world built by MDickin in Wrestling Empire so instead he made dollar store versions of all your favorite real-life wrestlers with equally silly names that fit the aesthetic of the game.

This game aims to deliver a fun, unique experience and it delivers that in spades.  While the career mode feels kind of limited in what can happen it is still an addictive and enjoyable experience. There’s a vast game world to explore and we can’t wait to dive into more.

Full List of Kirby And The Forgotten Land Codes