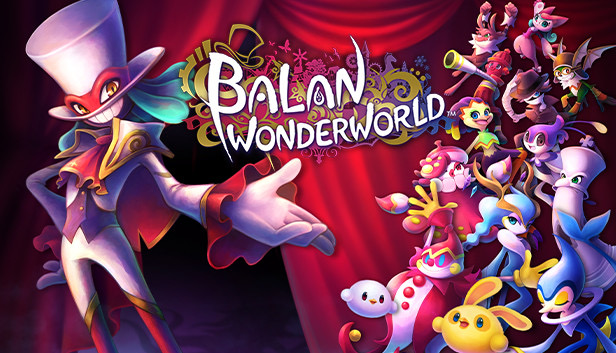 When a former lead of Sonic Team is behind a new game, you would be forgiven for being excited and hopeful for a game of joy and wonder. Yuji Naka will forever be a name synonymous with Sonic and hopefully this blemish on his CV will be consigned to history as soon as possible. We brought you the preview and now we have our final Balan Wonderworld review. (Game reviewed on Nintendo Switch)

A Blast From the Past? Balan Wonderworld Review

Oh! What a Fright!

Taking charge of either a young boy or girl, you will meet the mysterious and top hatted Balan who whisks you away to a weird and not very fantastical land. Animated and film style cut scenes have become as much a part of video games as the games themselves and that is no different with Balan Wonderworld. The opening cut scene is nicely animated but it lacks something rather important in so much that it fails to tell the player what is happening or what the story is about. When they said it’s a mysterious world they weren’t kidding!

There is plenty of competition when it comes to 3D platform games so you need to ensure that your game is going to stand up to the test. Balan Wonderworld not so much fails to stand up to the test as falls over several times and when it tries to get back up again just falls flat on its face into a huge puddle of mud.

The camera just does not work. It feels out of sync with the character you are controlling and it is even worse when the frame rate drops and stutters leaving you feeling nauseous and underwhelmed.

You want your character to feel responsive to your input but here the characters feel like they are stamping their feet in petulance when you press any button. Even moving the left stick to walk or run feels so heavy and unresponsive that it doesn’t take long before you lose any connection to the game.

The suits. The concept behind picking up suits that give you a special ability I really like. For example the wolf suit allows you to spin attack a bit like the Tasmanian devil if you remember that classic 90’s platformer. Sadly the concept and the implementation are poles apart. The same button that you use to jump at the start of the game also becomes the button to execute your new found ability meaning you cannot jump and at times that makes the game almost unplayable. A spin attack is not going to get you to the next ledge is it now?

Where the suit concept does have its positive points is that you have to consider the puzzles that you face and which suit is going to best help you solve that puzzle. Once more this is a concept that isn’t without merit but it also comes with its problems. If you come up against a puzzle and you realise you don’t have the right suit for the job, not only will you have to go back to a previous level to pick the right suit, you will on occasion have to go back to a previous world and pretty much start again. After just a few instances of this happening you are going to start losing your patience with the whole game.

The only other positive is that the graphics are not half bad. Colourful , bright and even a touch charming but looks alone are never enough.

Have You Any Wonder? Balan Wonderworld Review Verdict

It is not often that I feel lost for words when reviewing a game but Balan Wonderworld has almost left me speechless. There is so much wrong with this game that it is a wonder that it has passed any sort of quality control. The controls are stiffer than a board, the lack of any narrative is frustrating and the game is just so badly put together that I cannot think of any reason why I would recommend this to anyone at all.

Overall Balan Wonderworld is possibly one the most disappointing games I have played on Nintendo Switch. What were they thinking of when creating this game? Very little it would seem and far from being a world of wonder, this is a total nightmare.