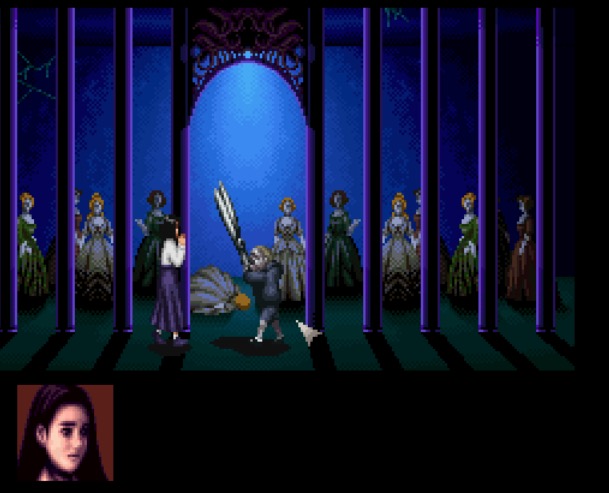 Gaming has a rich history that spans multiple decades. To this end, The LWOG Backlog is a series that looks back on titles across all generations. From the golden 8-bit era to the landscape-changing 64-bit scene and beyond, The LWOG Backlog’s aim is history. This week, we take a look at one of the earliest examples of survival horror, Human Entertainment’s point-and-click thrill ride, Clock Tower.

Jennifer Simpson has recently been adopted by a wealthy, mysterious man named Simon Barrows. Along with three other foster children, Jennifer is brought into Barrows’ lavish, albeit intimidating, mansion known simply as the “Clock Tower,” named after said mansion’s defining feature. Shortly after arriving, Jennifer starts to believe the mansion is more than what it seems. After investigating the dark halls for a spell, Jennifer witnesses the murder of one of her new siblings. The culprit: a deformed boy with giant scissors dubbed Scissorman. Can Jennifer help the others trapped in this nightmarish “Clock Tower?” Can Jennifer even save herself?

This is the story of Clock Tower. This title was released on the Super Famicom in Japan, known as the Super Nintendo in North America. Clock Tower saw a September 1995 release in Japan; though never officially released stateside, there exist fan translated versions online.

Upon first encountering the Scissorman. Jennifer’s goal becomes clear: to escape the “Clock Tower” by any means necessary. However, this doesn’t mean that she can simply escape through the front door, out of a window, or even via a car she stumbles upon in the garage. After all, she didn’t enter the mansion alone and she doesn’t intend to leave by herself, either. This creates a sense of terror in and of itself. To recover her missing family members, Jennifer must brave the Barrows mansion.

As the story progresses, the mansion warps and contorts, shifting from what is a grounded narrative to something more terrifying. Clock Tower is inventive in how it approaches survivor horror. Keep in mind that this was one of the earliest examples of the genre that gamers saw. Given the fact that it was also released on the Super Famicom, Clock Tower’s ability to build dread through its story is that much more impressive. Clock Tower tells its story through other means, which brings us to the next topic…

Clock Tower is a point-and-click adventure game that slots players in the role of Jennifer. The game takes place within the Barrows mansion. This doesn’t mean that the game lacks scope, however. As the game progresses, players will find themselves investigating bedrooms, bathrooms, and other areas of the mansion in search of answers. Not unlike other point-and-click games, Clock Tower is built on puzzles and problem-solving. Any mystery that’s solved or on the verge of being cracked feels well-earned.

The other element of Clock Tower’s gameplay is the main villain: Scissorman. As Jennifer makes her way through the mansion, she will be routinely stalked by the scissors-wielding maniac. In most traditional survival horror games, players possess different means of defending themselves. These include, but aren’t limited to, knives and firearms. Jennifer has no such means of defense. One cannot directly fight Scissorman; the only options are to run and hide, praying that players concealed themselves enough to where this looming threat will move past.

Jennifer’s status will be indicated by a graphic on the lower left-hand mode. Upon confronting Scissorman, Clock Tower will initiate its “Panic Mode.” Depending on Jennifer’s current status, she will either attempt to fight back or suffer at the hands of her deformed stalker. If a player’s health is low, they are incentivized that much more to flee. Clock Tower is a truly terrifying game. However, without a solid presentation to complement the gameplay, this wouldn’t be possible.

In the right hands, the Super Famicom was capable of producing high-quality presentation, not just in graphics but sound as well. In regard to the former, Clock Tower is one of the best-looking Super Famicom games that never saw an official stateside release. From the dimly lit halls of the mansion to cutscenes that will make new players jump in their seats, Human Entertainment got the most out of the hardware and then some. Clock Tower offers a genuinely creepy experience that will stay with the player.

Clock Tower nails things in the sound department, too. The main track, entitled “Don’t Cry, Jennifer,” plays whenever Jennifer is pursued by Scissorman. It’s an incredibly thrilling, effective track to boot, adding to the tension of each chase. However, what may be equally as unnerving is when no music plays at all. The simple sound of Jennifer’s footsteps will be enough to put players on edge. Before long, players will know that there is no “safe room” in the Barrows mansion. Clock Tower’s sound design is impeccable, to say the least.

One can make the argument that Clock Tower is one of the most replayable games from the 16-bit era. This is due in large part to its eight different endings, each one acquired by fulfilling certain conditions. Whether it’s simply escaping via car without discovering anything to playing the game through to the end, Clock Tower’s multiple endings provide incentive to come back time and time again. By the time all endings are reached, you will be a Clock Tower master of sorts.

Clock Tower is replayable due to the overall experience it provides, too. The game’s methodical pace, in addition to its ability to build tension, is not unlike a horror film. Survival horror games are effective at ushering players forward, making them explore rooms or approach threats they wouldn’t have otherwise. Clock Tower is very much like a playable horror film or TV show; like any film or TV show, this is a game worth coming back to every few years. By doing so, each scare, chase, and key story moment will feel fresh.

The main reason Clock Tower feels like a horror movie in video game form is its direction. Clock Tower’s director, Hifumi Kono, was inspired by the works of film director Dario Argento. The latter’s influence can be seen in different ways, from the utilization of young women in peril to foggy environments. Speaking of which, Jennifer’s appearance is based on Jennifer Connelly’s character in “Phenomena,” one of many memorable Argento works.

Upon its release, Clock Tower was not only a solid seller but it went on to spawn its own multi-game series. It reached other platforms, including the PC and the original PlayStation, but the original remains the best-aged. Speaking of which, the original eventually spawned an updated version known as Clock Tower: The First Fear. The two versions are largely identical to one another; the updated version is a step up in terms of graphics, however.

If there is one title in the Clock Tower series that must be played above the rest, the original would be ideal. More than fifteen years after its original release, Clock Tower remains one of the best examples of survival horror. It would also help establish the blueprint for future survival horror titles. Even for those that aren’t keen on the point-and-click genre, for the story and atmosphere alone, this title deserves a look. Since the title has never been officially released in the United States, in my view, it’s open to emulation as well. Load the game, dim the lights, crank up the sound, and prepare for a good time.