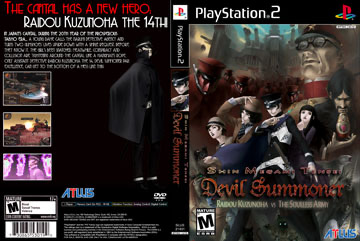 After completing the training to become the 14th Demon Summoner, Raidou Kuzunoha is sent to the capital with his newly acquired partner Gouto. Raidou furthermore, is assigned to the Narumi Detective Agency as a detective to both gather information and protect the capital from demons crossing over from the Dark World. Raidou, Gouto, and Narumi receive a phone call from a distressed young woman, who subsequently, asks to meet them later.

Arriving at the location, the trio witness the woman kidnapped by soldiers in red attire. The soldiers in red; subsequently flee after the battle, leaving Raidou to discover a mysterious butterfly brooch on the ground. After discovering the identity of the young lady, Raidou is; consequently set on a mission to not only uncover the mystery of a family curse but also uncover the larger plot being set in motion by higher powers.

Battles are real-time and involve Raidou and his demon versus enemies on a small field of battle. Raidou uses his gun and sword to attack while; moreover, the summoned demon can do basic and magic attacks. The demon and Raidou; consequently, can do combination attacks if the demon’s loyalty is high enough from training and usage. Raidou and the demons both gain levels from experience point; however, the demons’ attributes go up automatically. Raidou; consequently, doesn’t gain experience points from capturing demons but gains points towards leveling his rank.

Raidou can confine demons after exploiting their weakness through gunshots or magic attacks. All demons except Skill types; however, cannot be captured during a full moon. Demons; moreover, can not be captured if they are a high level than Raidou. There are seven types of demons: Pyro, Frost, Wind, Skill, Volt, Fury, and Pagan. Each consequently, has a weakness to one of the other types. Raidou can have a set amount of captured demons in relation to his rank.

Outside of battle, Raidou can summon demons to use abilities depending on their type. These skills consequently, allow for different interactions with NPC’s, uncovering items, or even moving heavy objects. Raidou can also send a demon on solo missions, as non-demon summoners cannot see them. Items appear on the world screen as red and blue glowing crystals and; consequently, only demons can access the red crystals.

The basic controls are straightforward and easy to learn. The square button is used for sword attacks, while the triangle button executes gunshots. The x button; subsequently, is used to block enemy attacks, causing less damage to Raidou.

Using the R1 button, Raidou can issue commands, reload his gun, and use items. When a demon is stunned, press the O button repeatedly to capture them.

The graphics are mostly what you would expect from a Playstation 2 game. Character designs are good, but not great. Character mouths unfortunately, do not always move in time with the words on the screen. The characters consequently, appear doll-like in appearance. The demons however, have very unique designs and attacks. The variety and variations in the demons’ appearances furthermore, entice the player to want to collect them all, like a much darker version of Pokemon. The demons are what make the game.

The design of the cities similarly, is good but not great. Cities; therefore, feel limited in exploration due to set paths and limited buildings the player can enter. There are animated cutscenes that progress the events of the story that; consequently, detail the characters and demons a bit more.

The music for Demon Summoner was composed by guitarist Shoji Meguro who; subsequently, composed music for the majority of the Megami Tensai series. The music is very rock and electronic style heavy. Battles; therefore, feel intense and cutscenes feel intense. Outside of battle; moreover, the music ranges from light-hearted comedic to soft and eerie depending on the situation.

Devil Summoner: Raidou Kuzunoha vs. the Soulless Army is an enjoyable experience for players of the franchise and; subsequently, of the monster collection trope. Devil Summoner is a good 7.5/10.