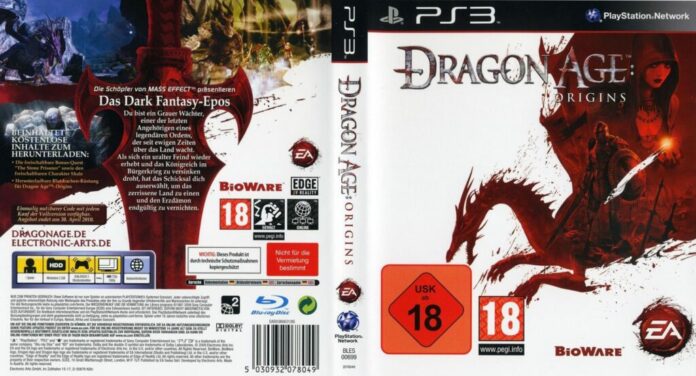 Players can choose between six origin stories, which; consequently, determine how the world of Ferelden reacts to you. These origin stories include Human Noble, City Elf, Dalish Elf, Mage, Dwarf Noble, and City Dwarf. Each path; subsequently, leads to an encounter with the Grey Warden Duncan, who is a part of an organization that battles the Darkspawn. The Main Character; henceforth, becomes known as the Warden after performing the Grey Warden ritual of drinking Darkspawn blood. The blood; consequently, allows for the Wardens to feel their presence and gain an advantage. The consequences; however, are a shortened life span due to the taint of evil blood.

Players will encounter numerous characters that will accompany them on their journey to defeat the leader of the Darkspwn, the Archdemon. The Warden; furthermore, will have the option to romance one of their companions through dialogue, choices, and gifts. The impact of these choices carries over through the DLC and; subsequently, Dragon Age 2 and PlayStation 4‘s Inquisition.

Dragon Age: Origins is a Strategic Combat RPG similar to the more recent FF7 Remake; however, a bit slower and more methodical. Players control up to four characters at a time in a third-person view. Companions; therefore, can be given commands and be pre-set to respond to enemies in specific ways that allow for strategy. Characters automatically attack enemies when in range; however, they can be manually selected during a battle to complete specific actions. A mage can be controlled to attack from afar, while a warrior can be frontline.

The game difficulty; moreover, determines enemy AI and gives an extra challenge for the final boss fight. Enemies attack in swarms; consequently, resulting in the player needing to plan and think on their feet. Enemy AI is programmed to attack characters with less armor and defense; therefore, leading the player to make constant character switching back and forth. Characters will automatically attack enemies in battle; as well as, complete preset attacks.  The player can also preset items to the radial menu for quick use in battle. Characters; accordingly level up from experience gained by defeating enemies, which unlocks abilities and talents.

Characters interact with one another through dialogue during movement and through the player’s actions. Through enough interaction; accordingly, the player can choose to befriend companions or make them hate the Warden. Enough hate leads to the companion choosing to leave the Warden’s party permanently.

The controls are straightforward. A player’s movement feels either quick or sluggish depending on the heaviness of equipment worn. Rouges with light clothing; accordingly, feel faster while warriors with heavier armor feel weightier. Commands are simple to issue with the L and R buttons on the PS3 controller.

Dragon Age: Origins’ cinematics is similar to the Lord of the Rings and; consequently, just as beautiful. Full-scale battles complete with realistic blood and violence in a fantasy world with a medieval setting. All-new armor is shown when equipped on characters with unique designs. Character models; truly, appear realistic through builds and facial reactions. Dwarves are stocky and short while; likewise, elves are tall and slender.

Beautiful orchestral and Celtic music adorns much of Dragon Age: Origins. The music compliments the emotions and; subsequently, the urgency of each battle, whether full scale or small. Character voices reflect the emotions of situations perfectly and define each character’s personality and feelings towards the Warden. Weapon sounds; indeed, sound realistic whether it be a sword swing or the launch of an arrow.

Dragon Age: Origins is an amazing submission into the Dark Fantasy style of RPG. Through six different origins stories; indeed, there is lots of replayability and adventure to be had. The continuation of the series is a must; especially, using the full power of a PS5. Dragon Age: Origins PS3 gets a solid 9/10.