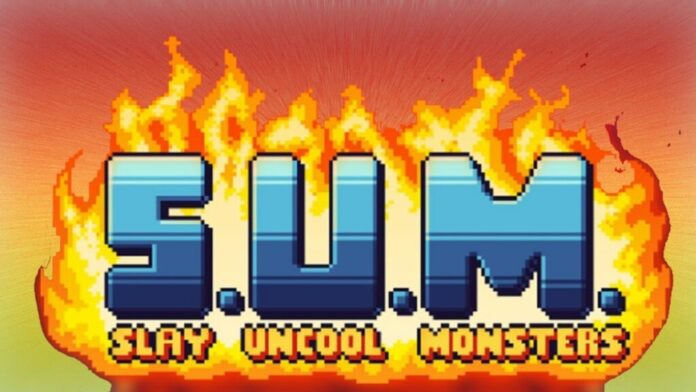 The cleverly titled S.U.M Slay Uncool Monsters is a very recent Nintendo Switch release from developers Doomster Entertainment.  It is a mathematics-based RPG, yes mathematics is at the core of how this game is played.  Originally developed as an Android mobile game, it released on the Switch on January 12th 2021 for the very affordable five euros for European gamers.  With a very unique premise, this game will either sink or swim so let’s jump into this review.

This is an RPG game where you level up by completing dungeons full of enemies.  The combat is done by completing mathematic questions.  The player has a board of numbers ranging from 1 to 9 at their disposal to complete addition, subtraction, multiplication, and division based sums.  If you take too long to answer or get the sum wrong then you will take damage, not something you can let happen too often if you want to stand a chance of winning.

The game starts easily enough with just one type of sum per dungeon, meaning you just have to get the answer quickly.  As you unlock more of the map the game becomes much harder as you may go from doing addition to doing multiplication, this requires a speedy hand and a speedy mind as any hesitation will leave you open to attack.  You may want to make sure you’re leveled up to an appropriate level before taking on these harder levels

The game doesn’t change much from that base, you can unlock different characters but this doesn’t change the gameplay, the only change is that the dungeons get longer and harder, and it requires more and more coins to unlock new parts of the map as the game goes on.

There is a practice mode available for anyone who may need to get their brain a workout before diving into the action.  In this mode, there’s no timer so you can take as long as you want to complete the sums.

For hardcore mathematicians, there is also an endless mode for you to test yourself until you can’t compute anymore.

The controls are simple; use the joycon or direction buttons to select a number and press the A button.  The game controls well with the cursor moving at just the right speed for you to be precise while also jumping from number to number quickly.  Poor controls would ruin a game like this so thankfully the developers got them just right.

The game has very retro-styled graphics, similar to Wrestling Empire, but they do the job.  Most of the time you won’t even have the chance to take note of the enemy designs as your focus will be on the sums needing solving.  Most importantly you’re never distracted from the numbers board or the sum you’re solving as they are given room to breathe on screen.  Similar to the controls the game’s graphics don’t take away from the experience but they do give the game a nice retro RPG feel.

This isn’t Persona 3 FES there’s no amazing OST to this game, instead you get catchy beats that fit whatever setting you’re in.  On the main map, you get chilled yet slightly haunting music, upon entering a dungeon you get a more pressing, yet still catchy, song.  Putting together a soundtrack that fits your game is much better than just throwing sounds together and S.U.M Slay Uncool Monsters achieves that quite well.

In this Slay Uncool Monsters review, I have mostly praised the game, and that’s because it’s a genuinely fun and unique experience for a maths-brained person like me.  With all the positives does come the main negative which is that the gameplay is repetitive and doesn’t change.  The increasing difficulty does keep things interesting but there’s only so much the game can offer.