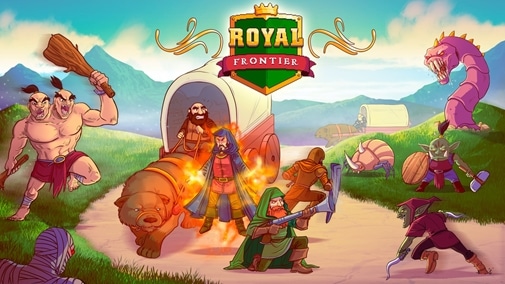 Royale Frontier is a strategic, turn-based adventure where the goal is to lead and protect your caravan through different areas of the game. Gamers can choose up to six heroes, three to use at a time, who each have different combat styles and techniques, as will be explored in this Royale Frontier review. Developed by Finland’s Woblyware and Published by Ratalaika Games, Royale Frontier is available for all systems and consoles.

Jumping Right into the Adventure

After a quick introduction explaining the backstory, I was given three paths to choose from. All paths had multiple symbols, which informed me of what to expect if I chose to go them respectively. The path icons reminded me a bit of Super Mario Bros. 3, except those were linear where there is a bit of variation here. Skulls were enemies fights and golden skulls were bosses, dollar signs represented shops, question marks were events where your choices affected the party, houses were villages where you could rest and recover PP or HP and treasures were well…..treasures. I found that I had to replay the level a lot to revamp my strategy, as the attrition was tough to overcome at times. The look of the game is very charming, but don’t be fooled, the enemies are far from it and strong planning skills are needed.

Death is also not the end; however, as you receive a score based upon how far you made it during a run. That score will unlock new “blessings” and characters for you to start a new journey with. I enjoyed being able to try new classes and blessings, which give you bonuses during each gameplay. You do not get to keep your level-ups for repeated runs, so make sure your blessings work in tandem with the character types you select. I replayed the game a lot trying out different combinations that worked best with my gameplay style.

One thing that really bugged me was the inability to sell my items at shops. I realize that it may cheapen the money icons on paths, but it still makes little to no sense to me. Also, you will need to practice the timing for defending enemies’ hits. If you miss enough times with the timing then you pretty much have to start your run all over again. Taking too much extra damage will cause an early sapping of resources that will leave you barebones for further levels.

A Nice Pick-Up and Play Title

As an old-school, Final Fantasy meets Oregon Trail hybrid, Royale Frontier is an enjoyable game that I was able to get right into. Simplicity works, which a lot of newer games could take a lesson from. While I did have the same minor complaints, the enjoyable strategic aspect and character designs were both charming and easy for me to get attached to.