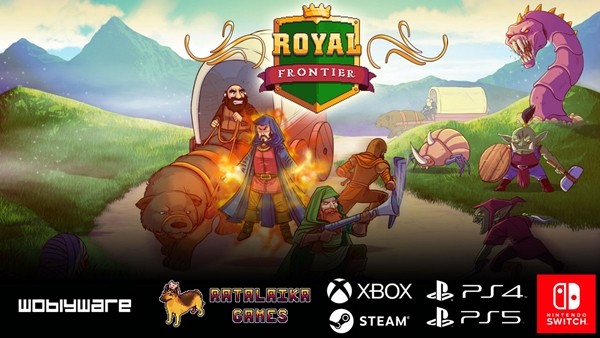 Royal Frontier Release Date has been officially announced as March 18th by Finnish Developer Woblyware and Indie Developer Ratalaika Games. The tactical adventure contains nuisances that allow players different experiences. Players guide and protect their caravan through different paths, allowing for much replayability. The charming and light-hearted presentation shows a fun experience. Royal Frontier is coming to Playstation 4/5, Xbox One and the X/S Series, Nintendo Switch, and Steam.

Some Immediate Thoughts and Observations

I do appreciate it when games are available across all systems. It is a very good move for business plus more feedback and observations can be given by different players in larger quantities. Games needn’t be overly complex for enjoyment, sometimes the pickup and play style reaps the most fun. Royal Frontier appears like a game you can immediately get into without the complicated extras.

What Can Players Expect?

Reported Features of the Game Include:

What Does The Trailer Reveal?

The short trailer shows a charming 2D system of combat and choices that will lead to different experiences each time for gamers. It appears as a blend of Oregon Trailer and early Final Fantasy, but with animated battle sequences. The choose your own adventure aspect will give gamers a lot of replayability and value within the game. The combat system seems very straightforward and easy to understand, unlike alot of games that try to overthink their gameplay.