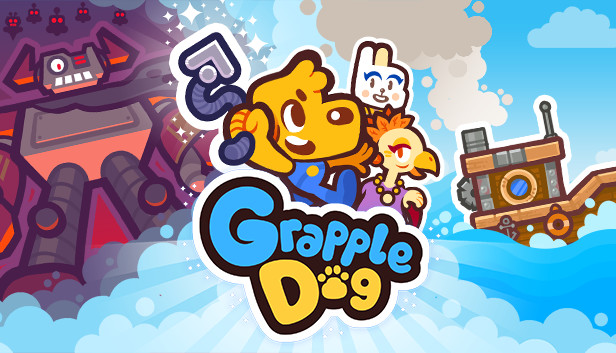 Sometimes a game really captures my heart, and Grapple Dog is one of them. It’s a fast-paced, fun-packed game, with the kind of occasional frustration that will feel familiar if you played a platformer at any point during the ’90s.

One Dog and His Grappling Hook

Grapple Dog is a chunky, charming, fun little game. You’ll play as Pablo, a dog with a grappling hook and a mission: to defeat the robotic overlord, Nul. Your job is to swing, jump, and collect your way through multiple worlds, fighting bosses and mastering new tactics as you go.

It’s a surprisingly lengthy game with a lot of content. As well as 6 worlds with multiple levels, you also have bonus levels, which you can unlock by finding bonus coins. Each level has 5 hidden gems, some of which are pretty difficult to reach.

The characters are pretty cute, and you can enjoy a bit of dry humour throughout, which is always welcomed in my book. The art style is distinctive. I’ve played a lot of pixel art games recently (which I love, obviously) but I enjoyed Grapple Dog’s chunky, bold lines as a bit of a twist on the norm.

Part of what makes Grapple Dog so addictive is the sensory feedback you’ll get as you play. Collecting fruit and gems and smashing enemies creates incredibly moreish sounds, and it feels unbelievably satisfying to collect them in sync with the music.

And the music is excellent: a little bit Jet Set Radio, it would make the whole experience more fun, if it didn’t start to get repetitive after a while. If I was nitpicking I’d want more songs to give it a bit of variety – each world has one song, which isn’t quite enough.

Pablo navigates the landscape using his fabled grappling hook. You can latch onto blue blocks or blue balloon-like objects. They stand out, so you can easily see what you’re supposed to be grabbing onto. You can also smash through objects, which sometimes enable you to jump higher.

This is where Grapple Dog got a bit frustrating for me. The controls are very precise, so being slightly out of alignment will see you sailing into the abyss. You have to switch quickly between grappling and smashing, which can be difficult to the point of annoyance. Sometimes it was obviously down to my own incompetence, other times it felt a bit unbalanced.

However, when it works, it feels like a dream. Swinging merrily from block to block, smashing my way across the landscape, and then dashing between giant bubbles of water made me feel like a genius when I nailed it. And while it’s frustrating when it doesn’t work, that didn’t make me want to give up. (Which is why I restarted one bonus level approximately 25 times before I conquered it.)

A Bit of Cheeky Nostalgia

Grapple Dog has its roots in several classic platformers, and you’ll notice these small nods to the genre as you play it. But the game stands on its own: this love for other platformers doesn’t feel too obvious, and it has plenty of charm and personality of its own.

I was playing it, trying to figure out what it most reminded me of. Was it Sonic? But then it hit me. Swinging my way across the levels rockets me right back to being a kid, sitting cross-legged in front of the PlayStation, playing Rayman. Something about the gameplay, the occasional frustration, and the general cheekiness took me right back. And that’s definitely not a bad thing.

Ultimately, Grapple Dog is fun, and sometimes that’s what I want from a game: no seriousness, just light-hearted, satisfying fun. And it offers that, in spades. If you love a good platformer, it’s a must-play.