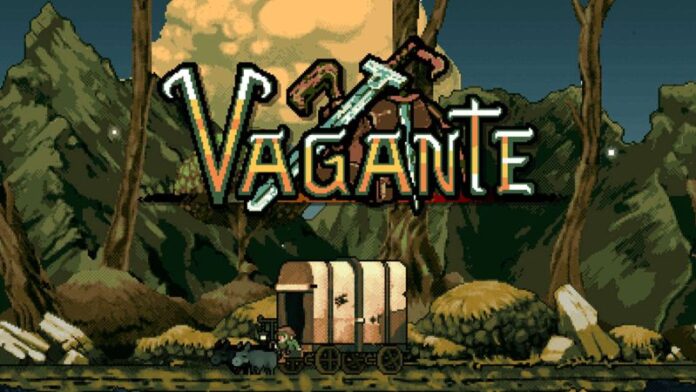 Vagante has been in development for ten years and that kind of dedication is serious stuff for an Indie company. Nuke Nine have now reached the finishing post but that is where I came across the biggest issue with this game and it’s the fact that it feels unfinished. It is  an action, roguelike title with plenty of platform elements but somehow it doesn’t quite come together into a polished, final product.

An Over Saturated Genre

The term ‘rogue like’ is seen so often now that in gaming parlance it has started to feel like an overused one and it is a genre that gets additions on a regular basis. That is not necessarily a bad thing and titles such as Enter the Gungeon and the stellar Hades are prime examples of the genre done well but what has happened with Vagante is that the kernel of the idea is fine, the execution less so.

You are thrust into a dark world of monsters, weapons and chests. My original feeling was a game that reminded me of Spelunky and Steamworld dig to look at. The storyline isn’t particularly well set out and the initial tutorial feels lightweight. It shows you the basic buttons to press for each action but little more and then leaves you wondering where to go next.

Ultimately, you need to find a door in a room that will take you to the next as you come across different enemies, boss battles, shops and then on you go. Now if this sounds repetitive it is because it very much is repetitive. You choose whether you want to play as a King, Rogue or Mage, collect your starting weapons which you can upgrade and away you go but there seems to be no purpose to what you do and where you go. It holds interest for about twenty minutes but then too quickly becomes stale.

I will say that the different type of hero works well and each one has different levels of stamina which do add a little piece of uniqueness but sadly not enough to cover for the other issues.

The graphics are gorgeous to look at and the semi hand drawn pixel art is superbly demonstrated in the forest area of the game where the greenery shines and everything looks lush and alive. The backgrounds in particular have been painstakingly created and a lot of care has gone into how the scenery looks. The trouble is, however, that for all of that beauty, each stage starts to look a little too familiar and that is a crying shame as it detracts from one of the things that deserves plenty of praise.

The sound fits the game well and does create a good atmosphere for proceedings.

In each area you can go straight to the door to progress but everything is more enjoyable when you take on the foes and bosses and does give some joy, albeit short lived. With a lack of any real explanation of what the game is about, I constantly found myself wanting more from the game than it was willing to give me and in many ways I have come away from this game feeling frustrated and disappointed because there is a good game in there trying to fight it’s way out, but it falls short in too many areas. Even the Co-op modes feel lacking and not enough to save the day.

Whilst Vagante feels like it has been a Labour of love in some ways, it’s lack of variety and shortness means it falls short of being a title I can recommend. Had there been more meat on the bones and a more compelling story to focus upon then this could have been a decent little game and I genuinely feel bad for not liking it but I have to be honest about what I found and whilst it is not the worst game I have played in recent times, Balan Wonderworld and the truly atrocious Gleamlight have that notoriety, Vagante fires plenty of arrows but fails to hit the target enough times.

The review code for Vagante was provided by the publisher, Blitworks.