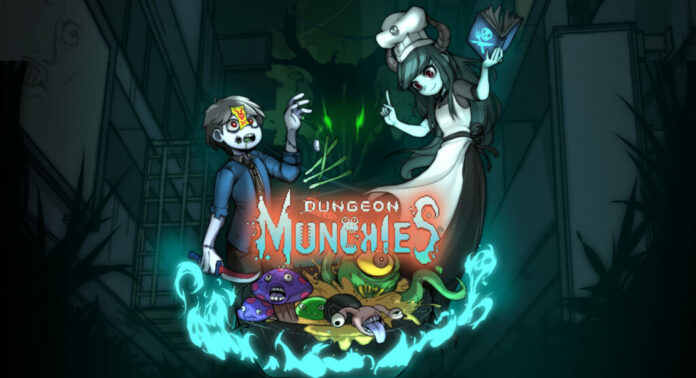 After watching the most recent Indie World Direct and then seeing it shadow drop on Nintendo Switch, Dungeon Munchies peaked my interest. It certainly has a great premise and the mixture of combat and platforming looked fun. However, as the old saying goes, appearances can be deceiving, and unfortunately, Dungeon Munchies suffers from a few too many issues that absolutely leave its more positive aspects to rot. This is the Dungeon Munchies review. 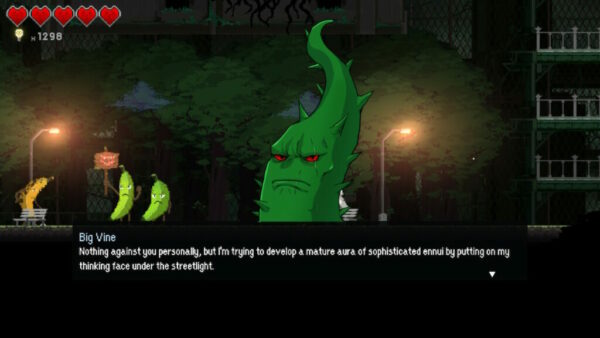 Welcome Back to Reanimated Life

After being brought back to life as a Zombie by the Necromancer Simmer, you are now thrust into this underground world where talking fruits and vegetables are the norm. Simmer was once a chef of some renown and she will not rest until she’s able to pass down all her secrets to someone. As her strongest reanimated creature it is now your task to gather the ingredients for these recipes by defeating the organisms that roam about the land. Progressing further into the world reveals some interesting secrets about Simmer’s actual overall goal, how the land became this way, and what happened to all of its inhabitants.

Something I appreciated immediately about Dungeon Munchies is how upfront the game is about its humor. The characters are so silly that you can’t help but laugh, even if you don’t find the written dialogue actually amusing. Everyone from fellow compatriots to the actual enemies has something to say in this world. Making it actually worthwhile to talk to NPC’s.

This is also where many of the story moments are flushed out too. Solely by talking to all of these characters, such as finding out there’s a “Lord of the Forest” who is actually going against Simmer in her quest or there being an uprising of food items who do not wish to conform to “the way things are.”

Let’s Get to Collecting That Food

Unfortunately for the non-conformist food, your Zombie is ready for the challenge. Combat is fairly straightforward with the ability to both jump around and dodge away from enemies while attacking is built around the use of both a primary and secondary weapon. Primary weapons are the typical Sword, Dagger, Staff, Spear ilk that you would find in almost any RPG. Secondary weapons are more varied and can be anything from defensive options like a shield or objects that spew out poisonous gas to even a gun or magic fireballs. Combat is ultimately a means to an end in mostly inoffensive, but this is where the reality of Dungeon Munchies starts showing its cracks.

If you only play games on consoles and don’t pay attention to what happens on PC, you may pick this game up and never know that it came out in Early Access in July 2019 and on Steam it is still considered an Early Access game. This was never mentioned by the PR team that gave me the code or stated anywhere in the description given on Nintendo’s E-Shop. Had it stayed solely on PC, I may have judged the game a tad less harshly, but once you release it on something else as a full game you waive the right of leniency in my view.

That being said, the combat severely lacks any oomph whatsoever. Each enemy has the same lack of reaction to being struck by a weapon and essentially just acts like a sponge until they meet their demise. The level design’s trappings also make combat and platforming a bigger chore than they should be. Since around almost every portion of a given level, there are spikes or some kind of deterrent against the walls that traps you into a specific area. And while there are some hidden areas where you’ll find special recipes, for the most part, each level follows the same trope of pushing forward until you find a save point or a camp area and rinse and repeat until you find the actual exit. This would be mostly fine if it wasn’t for the fact that your means of getting through each area is rather broken.

The Frustration of Platforming

Sadly, your means of traversal in Dungeon Munchies is absolutely annoying, the term “an exercise in frustration” has never been more appropriate. Jumping is super floaty and lacks any sense of weight. When you land on objects your character almost immediately starts slipping or becomes fidgety to the point where they are probably going to fall off and then you have to do the process all over again. Also, the controls are straight-up brought over from PC as well, as evident by the cursor that is part of your character. This cursor controls the direction of movement and attempting to line that up with where you want to go also slows down the platforming process.

So the combination of these two things makes beds of spikes and lasers quite a loathsome thing to push through. Due to these issues, I just found myself brute-forcing my way through certain stages at times. Finding it easier to intentionally injure my character as a means to get to the next save point faster than by doing it the “way you are supposed to do it.” Compound this with certain stages having very inconsistent save point locations and you can see how this all becomes irritating quickly.

Progression does bring with it some permanent abilities, but aside from the improved air dodge, the wall climbing and double jumping bring with it their own issues of sometimes just simply not working at all. Making platforming even more of a guessing game than it already is. At least your character’s version of wall climbing might bring with it some laughs, as it is not the cool thing you see in other games, this Zombie basically just hugs walls instead.

Simmer’s recipes aren’t going to revolutionize the way we think about food, but at least they will create some neat weapons. Essentially, almost every enemy you kill is going to drop something, these items are then used in recipes to create abilities, enhancements, and weapons. Everything from a fried mosquito that lets you gain an extra jump to mushrooms that spew poison out at a specific rate. All of these things that are available are extremely varied and it is actually impressive the number of items that can be made.

However, you cannot hold everything that you make, your character’s stomach can only hold seven items at one time. So it sort of creates a build that you can constantly tweak as the situation demands. The only thing I disliked about this system was that you could only change out items and weapons at the camps. Yes, you can fast travel between them, but similar to the save points, some levels are inconsistent about where they are placed. Once you unlock something you should have the freedom to change it out at any point. Especially considering you have the ability to access the menu for the weapons and items outside of camp, it just seems weird to relegate switching out weapons and items to a certain area.

Hooray for some cool Art Design and Music

Before finishing out this Dungeon Munchies review, I wanted to go back to some positives about the game. One of them is the art design. The sprites although static, are very well animated. Although the level design is severely lacking, the art design is certainly not. Each area may feel the same, but it very much looks different and that’s greatly appreciated. From the enemies in each stage to the obstacles used for the actual platforming and even the traps are unique to that stage. Once you progress to another type of area the art design really changes and it’s very refreshing to see advancement is constantly rewarded with new challenges to tackle.

The boss battles, in particular, are major spectacles and each boss has a great design. They each felt and looked special, presented a challenge, and made defeating them feel satisfying, which is all you can really ask for in that regard.

Lastly, I wanted to highlight the music of Dungeon Munchies. It certainly has its moments of grooving tunes that get you motivated to battle. It also has the more mellow tunes that fit the situation of just trying to find your way, but what I appreciated most were the ambient songs that were creepy and befitting of the areas you’ll find later in the game. This is perhaps what’s most disappointing about the main aspects of Dungeon Munchies not working well, because the parts around it are good and enjoyable, which would help put this game into a different class if only the gameplay aspects were not such a hindrance.

Overall Rating: 5/10. There is quite a bit to like about Dungeon Munchies, but unfortunately, the major components that matter in a video game, especially one that is a side-scrolling action platformer, let the rest of its parts down. The platforming is extremely unwieldy and frustrating. The fact that I have to intentionally injure my character to try to progress through a stage should tell you enough. Throw in the combat that’s just kind of there, and it ultimately just winds up as an unsatisfying gameplay experience. It’s sad really because I liked the story enough to want to keep pushing through, the characters are silly and funny, and it has good music and art design as well. It is quite possible that Chapter 3 gets added to the game eventually, maybe by then some of these issues will be fixed.

This game was reviewed using a digital code provided by the publisher through a separate PR company.