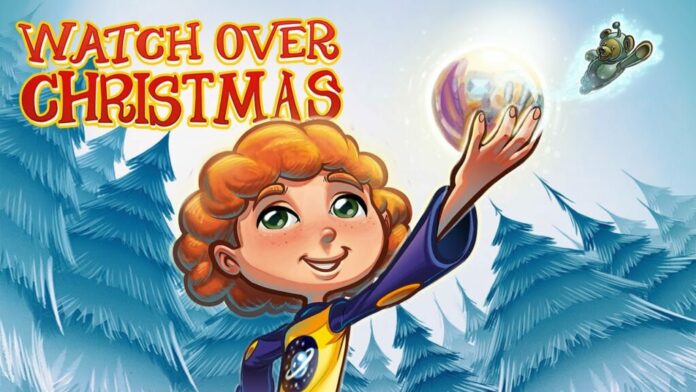 Watch Over Christmas, developed and released by Dionous Games, arrived on the 21st of December 2021, just in time for the big day. It seemed to me like the perfect game to play with my eight-year-old daughter in the sleepy, quiet period between Christmas and New Year, something to keep the Christmas magic alive after the main event.

What surprised me is how much I enjoyed it. Watch Over Christmas feels like a classic point-and-click, and it has a surprising amount of content.

Watch Over Christmas is a cute, charming Christmas tale

Watch Over Christmas sees you playing as Cisco, a cute little kid, excitably waiting on Christmas Eve. Cisco hears a message over the radio as he lays in bed waiting to go to sleep. Santa’s in danger! He needs your help! And then you’re off on an adventure, trying to work out a way to get into the family attic to unlock the first clue.

Accompanied by sentient toy bear Cosmos, Cisco quickly leaves the family home and heads into a magical world, packed with interesting characters, each with their own personality and a story to tell. You’ll encounter miserable elves, a council of witches, several bored fairground workers, and other interesting (and sometimes pretty mean) characters.

What surprised me was the length of the game. While I wanted to play this on the few days following Christmas, it’s actually way longer than I imagined it to be. Luckily, it’s so charming we’ll keep playing it into the new year.

Ultimately, the storytelling is great, and it has enough twists and turns to keep you interested throughout.

All the humour of point and click adventure games

The point-and-click adventure games of my childhood (Monkey Island, Broken Sword, etc) have a unique, dry sense of humour. Luckily, Watch Over Christmas continues this tradition. There’s no voice acting in this game, so you’ll have to read a lot of dialogue. This is broken up by plenty of cheeky jokes (try asking Dad why he keeps baby oil on the toilet!) and some fourth-wall-breaking stuff which made me smile.

You can tell the developers have a deeply ingrained love for the genre, which you can pick up on throughout. Beat the Witches Council, for example, and you can officially declare the return of the point and click adventure game. Unfortunately, that’s not the right dialogue option, but it’s worth doing anyway.

Obviously, this being a classic point-and-click, there are lots of puzzles in the game. Put the keys in the right order, sudoku-style, to unlock the door on the family bookcase, mix ink colours to fix a sweetie machine, that sort of thing. There’s a Labyrinth-style riddle, in which you have to work out which magical talking mushroom is telling the truth, and which is lying, in order to progress in the right direction.

The puzzles break up the classic ‘pick up an item, combine with another item’ mechanic that runs throughout, and the whole game feels pretty balanced in terms of gameplay.

The only downside to Watch Over Christmas?

I was hit a couple of times by glitches. Completing a puzzle caused the game to crash, although luckily, I was rescued by the autosave feature. Quitting out and going back in allowed me to carry on where I left off, and hopefully, these glitches will be ironed out.

The cursor is shaped like a Christmas tree, which my daughter found a bit cumbersome and annoying. She also lost interest after a while (admittedly, the abundance of toys in our house may not have helped). If you’re after a short game you can play with your kids, this isn’t it. While I’m happy to keep playing, younger players might find it a bit too long for their liking.

Honestly, I was surprised by how much I got into Watch Over Christmas. I went into it thinking it would be a game to keep my daughter happy on Boxing Day, but the classic gameplay style and sense of humour kept me engaged for longer.

If you fancy trying out a new point-and-click, it’s definitely worth checking out Watch Over Christmas. Grab it now and play it in the build-up to next Christmas, or use it as a nice, cosy distraction from your back-to-work blues in the new year.