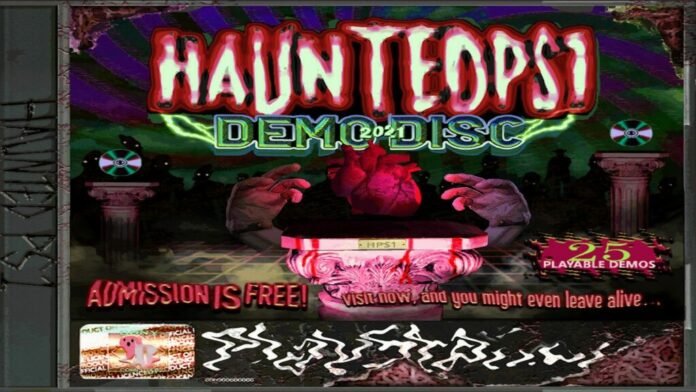 If there’s one subgenre that’s been seeing an uptick as of late, it’s the revival of PlayStation One-inspired horror. Late last month, I reviewed Bryce Bucher’s Fatum Betula, which was built around this from a presentation standpoint. Following my time with Fatum Betula, I found myself getting deeper into a rabbit hole of sorts. Imagine my surprise when I saw that said subgenre had considerable support, with independent developers crafting their own experiences for others to enjoy. The best showcase of these has to be the Haunted PS1 Demo Disc 2021.

Upon starting the Haunted PS1 Demo Disc 2021, the player is dropped into a foggy outdoor area, with no other people in sight. After exploring the area in question, you will stumble upon a particular alleyway. At the end a door with a lone light hanging above it. With no other options, you walk through the door. Soon thereafter, you find yourself in what can only be described as a museum. At the front desk, a magenta skeletal figure wearing a black fedora hat greets you. This creature, known as Skully – the Haunted PS1 mascot – hypes the museum’s offerings before sending you along your way. This is where your experience with the Haunted PS1 Demo Disc truly begins.

Admittedly, the main Haunted PS1 Demo Disc app is more of an interactive launcher than anything else. In fact, by digging through the game’s files, you will find each game’s executable, meaning that you can play each demo without having to run the Haunted PS1 Demo Disc app itself. However, I would make the argument that this cheats one out of the experience. The launcher feels very much at home with old-school demo discs, presenting the actual games in an inventive way. The fact that the launcher’s environments boast graphics similar to classic PS1 horror offerings makes for a solid first impression.

The creativity of this launcher even extends to the 25 playable demos included. Each game has its separate room, in addition to an informational plaque that provides further details, not unlike exhibits in a real-life museum. Furthermore, each separate room is designed with its specific game as inspiration. For example, An Outcry is an exploration game, taking place in an apartment complex, that blends RPG and point-and-click elements. Before loading the demo, you arrive in a room that resembles an apartment hallway; at the end of it, leaning against the wall and smoking a cigarette, is the game’s protagonist. This level of creativity is consistent throughout the Haunted PS1 Demo Disc 2021 and gives the impression that, despite its fictitious nature and low-poly graphics, you’re exploring a living, breathing establishment.

25 Playable Teasers, Each Unique In Its Own Way

The Haunted PS1 Demo Disc 2021 boasts 25 playable demos, each one bringing a set of unique ideas and concepts to the table. As mentioned earlier, no two experiences feel the same. Upon first loading the program, I was under the impression that I would be met with primarily Silent Hill or Resident Evil-like experiences, prioritizing horror in the traditional sense. However, the more that I got into these “haunted PS1” offerings, the more I realized just how versatile the horror genre in gaming could be.

Keep in mind that the games included in this package are strictly demos. Players will only have a limited amount of time with each before they’re brought back to the title screen. This gives players just enough to feel like their time was well-spent and motivated enough to follow these projects and perhaps even purchase them once their full versions go on sale. The fact that the experiences included are so varied ensures that it’s never a slog to go through everything the Haunted PS1 Demo Disc has to offer.

With 25 playable demos on hand, there’s plenty to see and experience. Going through each game in detail would be painstaking and, in certain games’ cases, ruin the surprise. However, having played through each demo, certain experiences stuck with me and these are ones I encourage others to try. Without question, one should play each teaser included, but for those that are short on time, here are some recommendations.

散歩 – Walk: This was the first of the playable demos I tried and to say that it set a tone would be an understatement. In 散歩 – Walk, the player takes control of a little girl who’s making her way home from school. It’s a dark night, however, and she isn’t the only one out and about. Soon, the player encounters a tall stranger with a white, uninviting face. Onscreen prompts alert the player to hide and keep quiet. 散歩 – Walk leaves the player feeling defenseless, as they must avoid certain doom while making their way home. The Silent Hill and Clock Tower vibes at play here are incredibly strong.

JANITOR BLEEDS: What would happen if one were to step into an abandoned video arcade? While this may seem like a jackpot on the surface, JANITOR BLEEDS takes this concept to a warped level, making the player feel like they’re less in a dream scenario and more in an unbridled nightmare. JANITOR BLEEDS tasks the player with exploring the arcade in question, playing a particular cabinet and moving forward. The way that said cabinet interacts with the game’s larger world helps this first-person adventure stand out from the cavalcade of Haunted PS1 Demo Disc 2021 offerings.

Loveland: In this playable teaser, a detective attempts to uncover the mystery surrounding the trailer park town of Loveland, Ohio. In this first-person puzzle adventure, the player learns about a sinister cult that utilizes frogs for the supposed purpose of salvation. One of the main reasons Loveland stands out is its sound design. Exploring a dimly lit trailer park is unnerving enough, but the sounds of frogs croaking as they hop along and crickets chirping in the nighttime complement this game’s chilling atmosphere.

Toree 3D: On the surface, Toree 3D has no place in a collection of playable horror demos. Simply put, this is a bright, colorful platformer that rewards players based on how well they complete levels. In fact, this game has more in common with Super Mario than, say, Resident Evil. However, by continuing to play this particular platformer, it becomes evident that not everything is as exuberant as it seems. Toree 3D, as well as its sequel, Toree 2, are actually available now on Nintendo Switch and PC. Given that each retails for $0.99, they are ideal for budget-conscious gamers.

Lorn’s Lure: Akin to Mirror’s Edge, Lorn’s Lure is a first-person platformer that puts the player in the role of an android traversing a dim, dangerous structure. Much like Toree 3D, this isn’t a “horror” title in the traditional sense. Rather, it creates a tense atmosphere that works shockingly well with the 3D platforming basis of Lorn’s Lure. Jumping and climbing are simple to pull off, never feel old, and lead the player that much closer to certain objectives. Based on this demo alone, Lorn’s Lure has become one of my most anticipated indie games of 2022.

Ghastly Goodies: For those that are fond of PS1 platforming classics such as Crash Bandicoot and Spyro the Dragon, Ghastly Goodies will feel familiar yet fresh. It’s Halloween night and, playing the role of a child in a costume, your goal is to collect as much candy as possible. Of course, treats are without their tricks, so careful navigation is essential. Not only does this 3D platformer boast a fun yet spooky aesthetic, but it has an incredibly fitting soundtrack for the console generation this game is inspired by.

The Heilwald Loophole: When it comes to sheer terror, no title in the Haunted PS1 Demo Disc 2021 matches up to The Heilwald Loophole. You awake in a storage room and before you know it, you encounter Dr. Randolph, who informs you that he’ll be taking your liver; this is where the chase begins. As you encounter this hospital’s twisted cast of characters, you’ll be doing everything you can to escape with your life. From its sound design to its adrenaline-pumping gameplay, The Heilwald Loophole is a title to keep an eye on.

More than anything else, the Haunted PS1 Demo Disc 2021 is an incredible showcase, illustrating just how much potential the PS1-inspired horror genre has. It goes far deeper than one would typically associate with the genre, bringing other gameplay styles into the mix. For those that are interested in learning more, you can download the Haunted PS1 Demo Disc on its official itch.io site. It’s entirely free as well, meaning there’s no commitment you need to make outside of hard drive space and time. From there, you can follow the project and look into related games if you’re hungering for more. Who’s to say that this won’t be your next gaming rabbit hole, too?