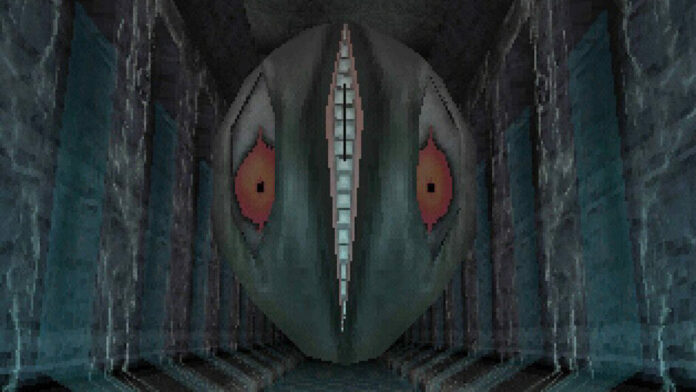 No set rulebook comes with developing a game. This is especially true on the indie gaming scene, which brims with imagination and potential alike. Furthermore, some of the most inventive projects come from harkening back to gaming’s past, drawing inspiration from what brings others nostalgia before reintroducing it in the modern age. For proof of this, look no further than Fatum Betula, a first-person adventure that puzzles the mind in terms of critical thinking and atmosphere. Developed by Bryce Bucher and published by Baltoro Games, Fatum Betula is available on PC and the Nintendo Switch. Let’s take a closer look with our Fatum Betula review.

An Unorthodox Story That Affords Freedom

Fatum Betula, which translates to “Fate Birch,” begins with the player in a shrine-like area, a single walkway in front of them. At the end of the walkway is a pool of water around the player, as well as a birch above them, its roots touching the water below. Soon, the player sees an orb-like creature bearing sharp teeth approaches them. Though threatening-looking at first, this creature informs the player that they must feed the birch to make it grow. The creature follows up by saying that the player must not feed it with what they bleed. After being given a set of 3 vials, the player is dismissed, allowing them to explore the world and determine how to fulfill the creature’s request.

The story of Fatum Betula is enigmatic, to say the least, though this is by design. Upon one’s first playthrough, there is just enough information presented to create mystery but motivate the player to learn more. As the player, once you’re let out into the open world, you’re free to do as you please. The eventual goal is to fill a vial with a particular fluid before bringing it back to the starting point, pouring said fluid into the birch’s water source. Fatum Betula consists of 10 endings, one of which leads to an Easter egg of sorts, and there is intrigue in finding each.

Fatum Betula makes a solid first impression with its presentation. Simply put, it wouldn’t look out of place among the various PlayStation One classics, possessing rugged 3-dimensional graphics and textures to match the PS1’s console generation. It wouldn’t be out of place on a shelf alongside console classics such as the original Metal Gear Solid or Spyro the Dragon. However, said presentation doesn’t come at the expense of atmosphere, which is incredibly rich. For instance, the cherry blossom field is accompanied by serene music, the sounds of birds chirping providing a greater level of ambiance. This was one of my favorite areas in this game for this reason; I often spent longer than I should have here because of how relaxing it was.

Fatum Betula is capable of tonal whiplash, however, creating environments that are innocent and peaceful as well as those unnatural and almost nightmarish. In the aforementioned cherry blossom field, there is a house with a bed that the player can sleep in. Upon awaking, the field is distorted, the blue of the sky replaced by a harsh pink, and the environment itself glitching, almost as if your console or PC ran into an error. The warped music is just as foreboding, further enhancing the idea that the player is in a bad dream. Fatum Betula may only have a handful of areas, but each one is expertly crafted, with no two feeling the same.

As mentioned earlier, Fatum Betula consists of 10 different endings. These are based on the choices the player makes, specifically concerning the fluids they come across. Using the vials you’re presented with at the beginning of the game, you can collect said fluids ranging from water to poison to plant growth, each of which leads to a different ending based on what you present at the starting point. This isn’t to say that collecting fluids is all Fatum Betula has to offer. The game’s world is interactive, seeing the player speak to characters and complete objectives, no matter how cryptic they seem.

In fact, certain endings require the player to think more outside of the box than others do. Ending 9 is especially mind-bending, requiring the player to juggle no less than 3 fluids, which are collected based on certain actions they perform. However, if they perform the wrong action, they can be locked out, meaning that they would need to start from the beginning or, ideally, from a recent game save. It’s not painstaking to get back to where one once was if a save file doesn’t exist, but be prepared to be left scratching your head wondering where to go next. If any criticism can be levied toward Fatum Betula, it’s that it can be a little too tricky for its own good at times.

There’s been something of a PlayStation One era revival in the indie gaming scene over the past few years. In 2018, Paratopic made its way to different platforms and, not unlike Fatum Betula, its visual style and presentation were reminiscent of PS1 classics. Fatum Betula is no exception, adding further credence to the idea that we are seeing an early 3D era renaissance of sorts. Even for those that hold next to no nostalgia for such old-school presentation, Fatum Betula’s problem-solving gameplay and borderline haunting mood make it a must-play.