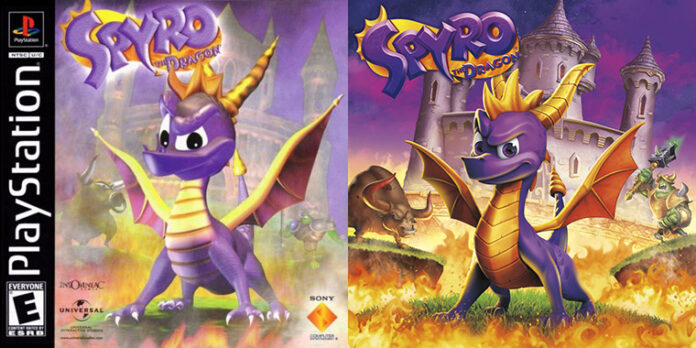 Gaming has a rich history that spans multiple decades. To this end, The Last Word on Gaming Backlog is a series that looks back on titles across all generations. From the golden 8-bit era to the landscape-changing 64-bit scene and beyond, The LWOG Backlog’s aim is history. This week, we take a look at the 3D platforming classic – developed by Insomniac Games and published by Sony, the original Spyro the Dragon for the PlayStation 1.

From the mid-to-late 90s, the original PlayStation wasn’t short on platformers. However, 3D gaming was still very much in its infancy. Developers had to learn how to bring a new dimension to the genre. Granted, there have been examples of classic 2D experiences on the platform, from Castlevania: Symphony of the Night to Klonoa: Door to Phantomile and beyond. However, when it comes to 3D platformers that have not only captured imaginations but remain legendary to this day, the first entry in the Spyro the Dragon series can’t be denied.

The original Spyro the Dragon was developed by Insomniac Games. Longtime PlayStation fans will undoubtedly be familiar with the latter; Insomniac Games would go on to develop such titles as the Ratchet and Clank series and the current PlayStation-exclusive Spider-Man games. However, prior to Spyro the Dragon, Insomniac Games released only one game, a PS1 first-person shooter known as Disruptor. While the title in question was fairly well-received, it wasn’t until they introduced the iconic purple dragon that they became a prolific game developer.

The original PlayStation was designed with a more mature audience in mind. Despite this, Spyro the Dragon was made to cater to a wider audience. From its colorful presentation to lower difficulty compared to other PS1 titles, this game was meant to be enjoyed by anyone, regardless of skill level. Spyro the Dragon for the PlayStation 1 was developed by Insomniac Games, published by Sony, before seeing a 1998 release in North America and Europe.

Spyro the Dragon takes place in the fictional Dragon Kingdom, which consists of five different worlds where dragons live peacefully. One day, the nefarious Gnasty Gnorc sees dragons being interviewed for TV. During the interview in question, Gnorc is spoken down about. He is called “a simple creature” and “ugly,” among other insults. Irate, Gnorc casts a spell, confining dragons throughout the kingdom in crystal. He also steals the kingdom’s copious amounts of treasure. The only dragon that hasn’t been encased in crystal is the diminutive yet determined Spyro. Alongside his dragonfly friend, Sparx, Spyro must free the dragons, reclaim the treasure, and defeat Gnorc once.

Once again, Spyro the Dragon is a child-friendly game and its story is indicative of this. For as mighty as Gnasty Gnorc is, he’s an admittedly foolish villain in terms of his demeanor. Furthermore, the game itself doesn’t take itself too seriously, whether it’s in regard to how the dragons address Spyro, the responses Spyro gives to his elders, and the like. Spyro the Dragon doesn’t require a deep narrative, but it’s effective at keeping the game moving forward.

Spyro the Dragon is broken up into six Homeworlds: Artisans, Peace Keepers, Magic Crafters, Beast Makers, Dream Weavers, and finally, Gnasty’s World. Each one serves as a hub for its various levels. In each location, Spyro must collect treasure, or gems, and free his dragon elders. By performing the latter, Spyro opens up a save point in the level. It’s also important to note that each level is relatively open-ended. In other words, while players are encouraged to play to completion, it isn’t necessary to reach the end credits.

Levels are relatively diverse, too. While they begin simple enough, with Spyro being required to defeat enemies, free dragons, and collect treasure, they become more varied with progression. For example, one of Spyro’s main abilities, the charge, is eventually used to pick up speed during declines. There are also a few flight levels in which Spyro can move through the air freely. The latter levels can prove to be the most challenging throughout the game, as Spyro must hit and destroy various landmarks within time limits. Additionally, each Homeworld includes a boss fight to cap things off. These boss fights aren’t terribly difficult, as these villains will often move from platform to platform, beckoning Spyro to follow.

In fact, Spyro himself is incredibly satisfying to control. The aforementioned charge will be the main method of combat, as it’s able to defeat and keep most enemies on their toes. However, for enemies that are smaller or lack armor, Spyro can breathe fire to take them out. Not only do these techniques keep enemies at bay, but they can also break structures and treasure chests. Spyro will also be able to glide through the air and rely on Sparx, who not only serves as Spyro’s life bar of sorts but can pick up stray gems for his buddy. Given how fast Spyro moves, the latter ability is incredibly convenient.

While it can be said that 3D games on the original PlayStation haven’t aged particularly well, Spyro the Dragon is still incredibly colorful and vibrant. Simply put, it invites the player at the onset. This goes for all areas in the game as well, from the once peaceful Artisans Homeworld to snowbound levels and beyond. Spyro himself is given plenty of personality, not just in terms of his appearance but his dialogue, the latter of which we will touch on a bit later. From a visual standpoint, Spyro the Dragon may have aged, but it serves its purpose well.

One area where Spyro the Dragon continues to shine, however, is in its sound design. Spyro himself was voiced by Carlos Alazraqui; longtime Nickelodeon fans may remember him as the voice of Rocko in Rocko’s Modern Life, Mr. Crocker in The Fairly Oddparents, and other roles. Alazraqui was able to perfectly capture the youth and immaturity of Spyro, giving him a softer yet determined tone compared to his dragon elders. The latter are voiced well for the most part. However, keen players will notice that certain soundbites are recycled among them.

Music is another area Spyro the Dragon excels. Each tune is catchy and mellow; they almost sound like the player is on a stress-free adventure as opposed to a grand quest where the fate of the world is on their shoulders. Spyro the Dragon was composed by Stewart Copeland, who was the drummer for The Police. In addition to multiple Spyro titles, Copeland worked on other games including Alone in the Dark: The New Nightmare and even TV shows like Nickelodeon’s The Amanda Show. Case and point, the credits theme for The Amanda Show sounds very much like the song for Magic Crafters’ Wizard Peak level.

Spyro the Dragon is an easier game compared to other PS1 titles; a simple trip from beginning to end may last anywhere from five to six hours. However, this doesn’t account for the possibility that a player may free every last dragon and collect each gem in a level. Spyro the Dragon can be played to one-hundred-twenty percent completion. In this instance, Spyro the Dragon can last a player for well over thirteen hours, especially with the aforementioned flight levels being quite challenging.

Once a player completes Spyro the Dragon one-hundred percent, they still haven’t truly beaten the game. This is where the player is given a bit more content to where they can complete the game an extra twenty percent. Without going into spoilers, this final area is perhaps the most enjoyable. It provides the player freedom to do whatever they want to collect final pieces of treasure. For completionists, Spyro the Dragon has plenty to offer.

Spyro the Dragon for the original PlayStation quickly became one of the marquee titles for the platform. Given that it was released during the holiday season of 1998, it saw considerable success. It also helped establish Spyro as one of the PlayStation mascots of the time; the other was Crash Bandicoot. The success of Spyro also allowed Insomniac Games to be positioned as one of the trusted entities for Sony. The developer’s success it enjoys today is evidence of this.

The original Spyro the Dragon saw two other titles on the PS1. These were Spyro 2: Ripto’s Rage and Spyro: Year of the Dragon. The Spyro trilogy on the PS1 is often considered by fans as the best of the franchise. It would even see a remake: the Spyro Reignited Trilogy in 2018. In addition to revamped graphics, this new trilogy provided players with classic and renewed soundtracks. All the while, it maintained the integrity of the original levels and locations. The original Spyro the Dragon for the PlayStation 1 started an undeniable legend in the form of a little purple dragon that could.