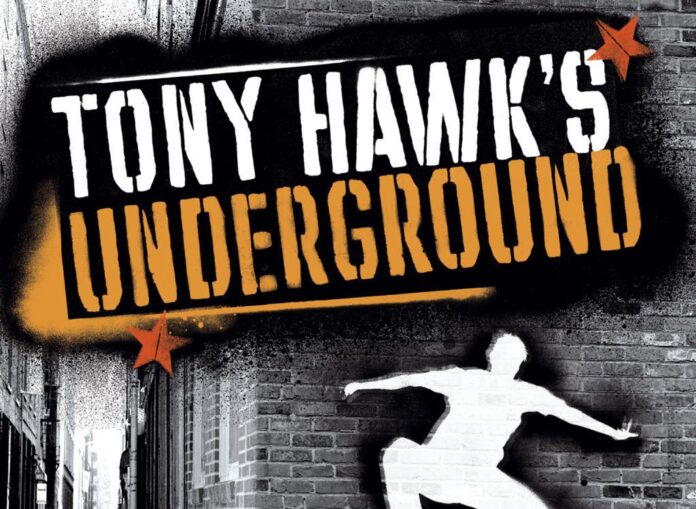 Gaming has a rich history that spans multiple decades. To this end, The Last Word on Gaming Backlog is a series that looks back on titles across all generations. From the golden 8-bit era to the landscape-changing 64-bit scene and beyond, The LWOG Backlog’s aim is history. In this edition, we look at Tony Hawk’s Underground.

Tony Hawk’s Underground was a change in pace for the series. The first three “Pro Skater” entrances in the franchise had two-minute time limits that encouraged users to complete goals to earn “tapes”. The goal was to collect enough tapes to unlock more levels. The career mode changed a bit with the release of Pro Skater 4. The time limits were taken out of the game and players needed to interact with other characters to be assigned goals to complete.

This served as the catalyst for Underground. Underground took the groundwork laid by Pro Skater 4 and added in a story for gamers to play through.

Players take control of an unnamed aspiring skater in their hometown in New Jersey. Their best friend Eric Sparrow who is a fellow aspiring pro skater comes to the protagonist’s home to let him know that pro skater Chad Muska is coming to town for a demo. Eric and the protagonist help around town to secure tickets to the demo. The protagonist impresses Muska by doing some tricks around town and is gifted a new skateboard from Muska. Muska also encourages the player to try and get sponsored by his local skate shop, which is owned by skating legend Stacy Peralta.

Peralta is willing to consider taking the protagonist on if he can make an impressive sponsor me video. Meanwhile, Eric is in trouble with the local drug dealers for setting one of their vans on fire. The two are able to get a train to Manhatten New York with the help of the local street racing crew to escape the dealers.

The duo arrives in New York and films a sponsor me video that impresses Peralta back in New Jersey. Peralta puts them on the team and loans them a van to make it to Tampa for the Tampa AM contest. Eric is arrested after insulting a local police officer during a traffic stop. The protagonist then completes tasks around Tampa to bail Eric out of jail. The two go to check in when it is revealed that Eric only signed himself up for the contest.

The protagonist impresses some pro skaters that are around for the competition including Tony Hawk himself. Hawk is able to get the protagonist into the competition, which he wins. At this point, the player becomes an amateur and joins a skate team. They can choose from Birdhouse, Element, Flip, Girl, or Zero.

The next stop is San Diego California where the protagonist meets the team manager Todd. They explore the town meeting other members of the team and complete a few trick photo shoots. The team has a demo and celebrates with a party afterward. It is then revealed that Eric has signed to the same team, as the team heads to Hawaii to shoot a skate video.

While in Hawaii the protagonist completes a McTwist off of the Royal Hawaiian Hotel over a police helicopter. Eric films the entire trick as the team leaves Hawaii for the Slam City Jam in Vancouver where the video will premiere.

The team heads to Moscow Russia where the protagonist and Eric briefly reconcile. During a drunken night, Eric steals a tank and inadvertently crashes it into a building. The protagonist had tried to get into the tank to stop it but was unable to. The protagonist is arrested and dropped from the team. The team including Eric leaves him behind. The protagonist is bailed out by the US Embassy and completes favors around Moscow to make it back to New Jersey.

Eric has become financially successful has let his success go to his head, developing a large ego. Once back in New Jersey the protagonist reconnects with Peralta and is angry that kids will look at Eric and think that is what skating is about. Peralta suggests they make a skate video that shows off “soul skating”, which shows skating for fun instead of for pride and money the way that Eric skates. The protagonist recruits a few pros and the video is released.

Tony Hawk’s Underground was much more story-driven than any other game in the series up to that point. Instead of completing goals to get tapes and unlock new levels, gamers need to complete a certain number of goals to advance the story. The story is broken into chapters that take place over different locations in the game.

The tasks usually require the player to achieve a certain score, do a certain combo, or do a certain set of tricks to complete the goal. These elements borrow from the earlier games but are used to progress the story instead of earning tapes.

This was also the first Tony Hawk game to allow a player to get off their skateboard. It introduced new elements such as running and climbing to find new spots to skate or to accomplish certain tasks.

Along with the story mode each location featured a pro skater that would teach the protagonist a new trick. Vehicle tasks were also available that would unlock the ability for the player to use on that level after successfully completing the task.

The levels all have an open world element to them. The protagonist skates around the level and speaks with various locals, or other skaters to be assigned goals. There is no time limit in exploring the area so players can “free skate” as much as they like before advancing the story. You are also able to go back to locations that have already been completed to do leftover tasks or free skate.

As with other games in the series, Tony Hawk’s underground featured a soundtrack that played in the background. The soundtrack featured a variety of music from rock, punk, and hip-hop genres.

After completion of the story, players can go back to complete any goals they missed out on. They can also find all “gaps” located at each level. Once the game is completed any new games will feature a secret ending. Instead of the final skate-off with Eric, the player will “Falcon Punch” Eric and grab the Hawaii tape.

Completion of the main story unlocks a secret level. The level “Hotter Than Hell” features a skate park and a dune buggy park with huge jumps for players to take advantage of. By activating all four letters of KISS, the band KISS will play a three-song set live on the map.

The game also features the “Create A” modes found in previous games but with new additions. Gamers are able to create their own skater, skateboard, or even trick.

The game was overall well received by critics and gamers alike. It was given a direct sequel Tony Hawk’s Underground 2 which featured a different storyline and the return of Eric Sparrow as a character.

The story-driven gameplay was replicated on future Tony Hawk games such as Underground 2, American Wasteland, and Proving Ground.

Tony Hawk Underground altered the course of the franchise, giving it a different and more story-driven focus. Did you enjoy Tony Hawk’s Underground? Let us know in the comments below.