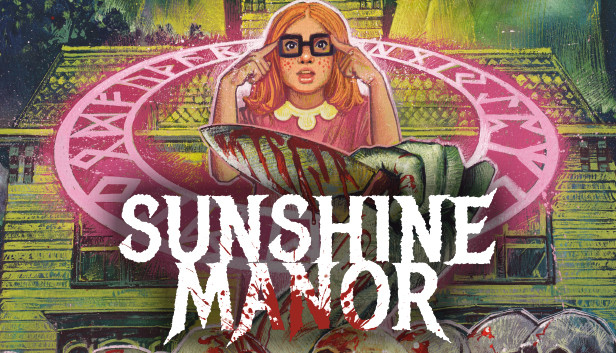 Recently I got to play Camp Sunshine, a horror RPG by Fossil Games. Sunshine Manor is the prequel, set before the events of the first game. I was really excited to play it to see how it compared.

I’ll give you the gist up front – I loved Sunshine Manor. Here’s why:

Sunshine Manor – a Nostalgic Trip to a Haunted House

You play as Ada, a child searching for her friends in a haunted mansion (because of course, they just had to go nosing around in there). Ada quickly realizes that a) she has powers, and b) finding them is going to be complicated.

The story was probably the weaker part for me compared to the gameplay. It wasn’t immediately clear to me what happened to Ada’s friends, for example. However, the game itself is so fun to play that the story just didn’t seem as important to me. I was so happy pottering around as Ada that I almost didn’t mind what the underlying story turned out to be.

I will say, the characterization is excellent. Each character felt quirky and unique, and I felt the characters had more depth than those in Camp Sunshine. The whole game feels nostalgic and warm and occasionally surprises you by being excellently gory.

Sunshine Manor Is Fun from Beginning to End

For me, Sunshine Manor has better gameplay than Camp Sunshine. As Ada, you begin by searching the house for your missing friends. It quickly becomes clear that it won’t be that simple. Your job is to find four ghosts in the house, trapped somewhere between the present and the afterlife, and set them free (if you can convince them that they are dead in the first place).

Ada has powers, which you can use to solve puzzles and destroy enemies, but it’s not particularly combat-heavy. There are a couple of jumpy moments, which I liked.

Once you agree to help a ghost, they’ll launch you into a different area. Each area felt unique, with its own enemies, puzzles, and tasks to complete. Some were harder than others. (If you’ve ever tried to steer a person across a series of rapidly spinning wheels whilst avoiding being shot by a monster, you’ll know the kind of frustration this can bring.) Still, it was satisfying to complete them.

As you set the ghosts free, the main house will begin to shift and become more difficult to traverse, with new enemies and traps. It’s varied enough to keep you on your toes. You’ll collect costumes, which you can switch between to unlock different powers (my favorite is the robot costume, not necessarily because of the powers, but because it’s adorable).

It’s just fun. All the way through. The last dungeon is fun, the main boss is fun, even the mini-game in the end credits is fun. It feels like a joy to play from beginning to end.

While I really enjoyed the pixel art in Camp Sunshine, the art in Sunshine Manor felt like a distinct level up. The house itself (and the many items inside) look beautiful, and the characters are expressive. I looked forward to the short cutscenes peppered throughout because I appreciated the art style so much. It’s set in the 80’s, and it feels nostalgic without being cliched.

Like Camp Sunshine, the sound design is good. The house is eerily quiet to start with, making the jumpy moments a bit more intense.

Overall, I’m very impressed with the amount of content in Sunshine Manor. It’s definitely a highlight for me in terms of indie games I’ve played this year.

The story didn’t feel as cohesive perhaps as Camp Sunshine, and I did encounter a glitch, but the gameplay and gorgeous art style more than makes up for it.

Oh, and you get to pet a dog. They get extra kudos for that, of course.