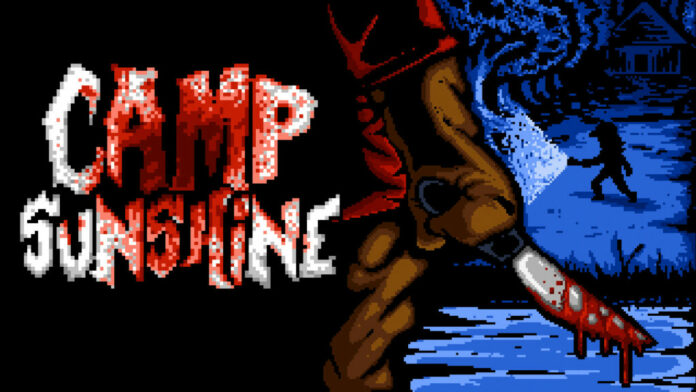 I’ll admit I’m a sucker for nostalgia. I also love some good pixel art, so Camp Sunshine is ticking quite a few boxes for me right off the bat.

Made by Fossil Games using RPG Maker, Camp Sunshine was originally released in 2016.  Here’s what I thought of it:

Camp Sunshine Review – Avoid The Bear At All Costs

I want to talk quickly about the art style, which is excellent. Pixel art games are very much my bag, and Camp Sunshine looks great, oozing 16-bit nostalgia. The characters and setting look great, and it’s surprisingly gory (I never knew how detailed 16-bit intestines could be).

The main character, Jez, has to see his way via torchlight, and the dim lighting is excellent, making the whole thing a little bit creepier.

I had a feeling Camp Sunshine was going to be short, and it is – it takes around 3 hours to grab everything. But there’s a lot of story packed into that time, with some interesting twists and turns.

You (as main character Jez) turn up, reluctantly, to summer camp, only to wake up in a blood-soaked nightmare. The only way to piece together the story is to find diary pages, which reveal (via some lovingly animated flashbacks) the underlying cause of all the horror and death.

Despite the gore, it’s funny and lighthearted at times. It pokes fun at some of the more absurd tropes of the genre (at one point Jez asks himself why he’s searching a dead body for items before finding, and pocketing, food), and it’s packed with references to slasher movies, other videogames, and even throws in a cheeky nod to The Simpsons.

Just Get Out of the Building and Everything Will Be Fine

The main mechanic is to collect items (diary pages, keys, white flowers, treats for a dog) in order to slowly unlock the story. You’ll be doing this in a dark campsite, stumbling upon the dismembered remains of your campmates. You’ll also be avoiding a bear mascot wielding a knife.

The first few times Sunshine Bear showed up, I jumped in my seat. You’ll have to run away from him, both on the campsite and in the individual buildings. He can appear from nowhere, so you can’t let your guard down. Luckily, on the difficulty setting I used, you can leave the building and he won’t follow you. If he appears, you just have to make a mad dash for the exit. Outside, if you avoid using your torch too often and don’t tread on any branches, you should be able to dodge him.

The fetch quests were on the verge of getting a bit tiresome, but you’ll stumble across the occasional puzzle, which helps to mix things up a bit.

Another thing: this game has difficulty settings, which I really appreciate. With accessibility and difficulty levels being a much-needed topic of discussion right now, it’s nice to see a small indie game giving you options, as well as a cheat (‘always sprint’) if you need to make things even easier.

Play It With the Sound Turned Up

One more thing: this is a game to play with the sound turned right up. It has an ominous, and nostalgic, soundtrack. The music adds a ton of atmosphere, so put your headphones in and enjoy.

One downside: the bear saying ‘come here, kid’ starts to grate after a while. It’s threatening at first, but after the twentieth time I started swearing back at him (I’m not sure if this says more about me or the bear, actually).

A short but sweet indie game, lovingly made, with tense moments and pop culture references coming out of your ears – there’s a lot to enjoy about Camp Sunshine.

Yes, fetch quests were bordering on annoying, and the bear’s threatening growls lose their creepiness pretty quickly, but overall it’s a fun little spooky game. The perfect thing to play on a cold, dark night.