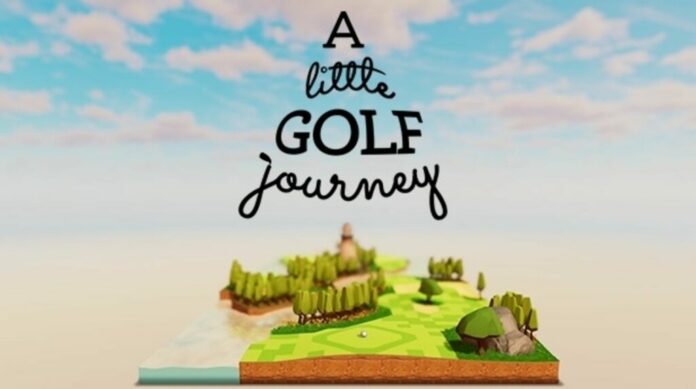 A Little Golf Journey is so much more than anything I could have expected. A game that advertises itself as a “relaxing adventure golf experience” was always going to attract my interest but this game blew away even my wildest expectations and stands out as one of the best gaming experiences I have had in years.

A Little Golf Journey Review – A Transcendent Hole In One

An Experience Unlike Any Other

Calling this game “A Little Golf Journey” is underselling just how amazing this game is to experience. Be it visually, aurally, or storytelling this game is consistently transcendent and sucks me into its world through the extremely simple medium of golf. And I understand that sounds insane, how could a GOLF game be considered a transcendent masterpiece? Well, ask the lovely people at Okidokico who managed to thread that particular needle.

As the game progressed through each new land I was more and more in awe of what I was playing. Each new level was more visually stunning than the last with new challenges unfolding before my eyes as I aim to reunite X and Y. The last two levels in particular were fantastic as I first golfed ON THE MOON! before going “into the machine” to a world that breaks things down to just neon colors without any of the textures I was used to. The moon and machine are two of the most unique settings that any golf game has ever taken me to, but they are both incredible in their own ways. The story ramped up in these later levels which kept me coming back for more and made it almost impossible to put my Nintendo Switch down as I was desperate to find each new note to see how things unfurled between X and Y.

One of the simplest ways in which this game pulls me in is the level select screen. This is one big map that is gray at the beginning but by completing each level I brought color back to this world bit by bit. This is such a simple yet effective maneuver that makes every level feel important and allows the game to fully showcase the strength of its visuals.

Speaking of the visuals A Little Golf Journey makes the most of what they have and managed to create a beautiful world full of breathtaking settings. They do all this without a reliance on realistic graphics, instead using a wide array of settings, lighting, and colors to craft a number of visually pleasing levels.

The audio quality of this game deserves its own heading. The game’s score is so soothing and alluring that it compliments each level of the game perfectly. Haakon Davidsen did a masterful job of creating a soundtrack that I never got tired of hearing despite all the hours I sunk into the game. The score aside the other sounds in this game are so satisfying and further add to its soothing nature, the simple clunk of the golf ball when it lands in the hole, the crack of the club when it hits the ball, the wind and water rushing through, its all so aurally pleasing and further pulled me into the game and the world it was creating. Sound is often such a forgotten aspect of game development but in this case the sounds of the game went a long way to making this game a fully engrossing experience.

One of the standout positives of A Little Golf Journey is the level design. The simple aspect is the number of ways you can make it through the level in order to get as many stars as possible which involves some tricky shots and picking the correct path to the flag. On top of that, there’s my favorite aspect of the gameplay, which is the sheer number of secrets hidden throughout the game. It is mind-blowing how so many of these secrets are hidden in plain sight and never feel tacked on to the level, instead they feel like they were purposely added in for the most thorough players to discover. One complaint I have about modern gaming is how often games will build large but ultimately empty worlds where it’s clear they just want to pad out the time it takes to beat the game, this isn’t the case with A Little Golf Journey as here every level feels like it was designed with the utmost care to pack in as much as feasibly possible without ever making things overwhelming.

I once wrote about a game called Abzu and how I felt that was the pinnacle of gaming as an artform but Abzu might just have competition from A Little Golf Journey. This game is almost beyond words. It is invigorating in just about every way and feels like an experience that manages to rip you away from reality with ease. If I had a minor critique of the game it’s that the story can feel a bit underdeveloped at times and admittedly the game does take a while to fully grip you. However, those minor critiques aren’t enough to stop me from considering this one of the most amazing gaming experiences I’ve had in a long, long time.