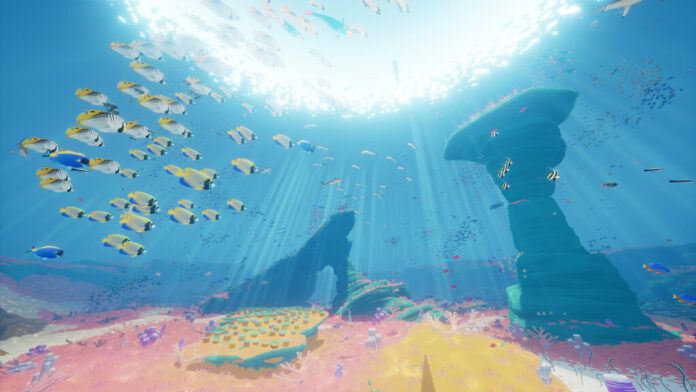 2016 release Abzû is a game that you probably haven’t heard about in quite some time.  The Giant Squid Studios developed game faired quite well early on in its life cycle reaching ninth on Steam’s sales charts in its debut week, it certainly wasn’t a chart-topper like FIFA 21 however.  Why then are we talking about a 2016 release?  Well, the game is currently on sale on the Switch store for just two euros.  This, combined with fairly positive reviews spurned us on to purchase the game.  And boy are we glad we did because this game is magical.

The game immediately plonks you into its world and after a brief two-button tutorial sets you off to explore on your own.  From there you set off to explore the deep sea, deeper than any human has ever been before.  The game has drawn many comparisons to Journey, the king of the so-called “walking simulator” genre, and these comparisons are more than appropriate.  Like Journey this isn’t a game about winning or losing, it’s about exploring and experiencing this world that the developers crafted.  And what a world they deliver, it’s a calm experience filled with colors and fish as far as the eye can see, the music in the background accompanies the game beautifully as it soothes you.  Many games of this ilk fall into the trap of feeling empty but Abzû never has that problem, there’s always something happening, there’s always something keeping your attention.  Be it watching as beautiful fish wow your eyeballs or when swimming along the currents you’ll never find yourself bored.

It’s this kind of game that reminds us of why we fell in love with gaming in the first place.  So many games in modern times are loveless cash grabs but Abzû is a creation that is designed to be experienced to the fullest.  It takes us away from this rock floating in space and allows us to experience a world we couldn’t even begin to picture in our own minds, a world different than our own.  It’s a game filled with beautiful visuals that will have you in awe while soothing music plays to underscore the beauty you see before you.  Abzû is an experience, it is art, it is a showcase of the full powers of gaming as an art form.  So if you can, play Abzû while it’s cheap, and maybe you’ll fall in love with it as we did.