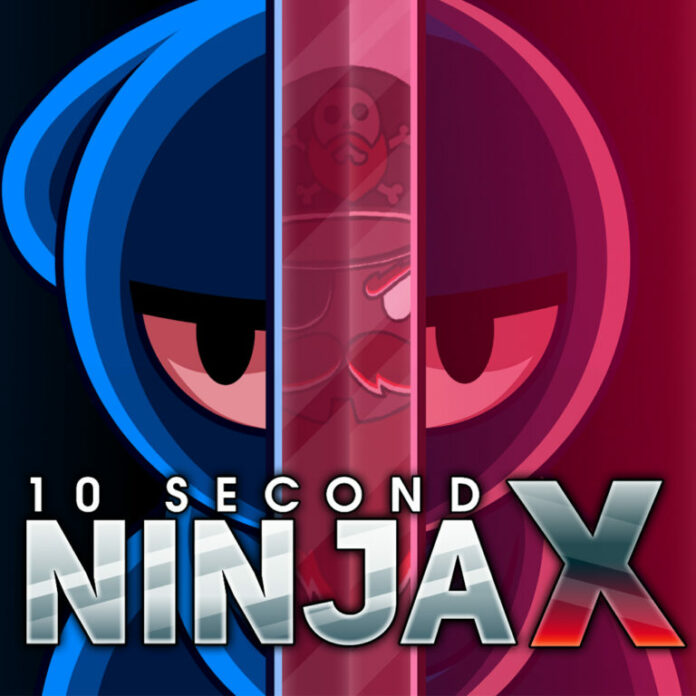 10 seconds is a time I always associate with the 100 meters in athletics and it flies by at pace. When you are challenged to beat every level in a game in 10 second it can get your heart racing as you battle to get that sub 10 second timescale licked. 10 Second Ninja X follows the likes of 10 Second Run Returns with its fast paced action and is the feature of our latest Quick review.

The game is a side scrolling 2D platform puzzler where you play a Ninja tasked with killing robots in under ten seconds to complete each stage. The robots weirdly look like they may be part of the Dr Eggman (Dr Robotnik actually) family and are located at varying places in each stage but as it happens they belong to Greatbeard. You are able to jump up to higher platforms but must avoid electrical volts as well as being able to fire a projectile although that has only limited capacity and needs to be used sparingly and strategically.

Stage completion is rated out of three stars and the quicker you compete the stage the more stars you will get and there is something addictive about trying to beat the stages in quicker and quicker times.

The clock only starts to countdown once you start to move so it is worth taking time to assess your surroundings as this will be vital to your success. Double jumps can help you to find hard to reach places but be warned that one false move and you are going to struggle to beat the clock.

For a budget game there are plenty options where you can change the speed of the game, check out the online leaderboards, use eight different characters who have costumes to unlock or play in one of the marathon modes. With over 100 levels and 11 game worlds to play through this is a game that can be picked up and played in short bursts as well as having plenty of longevity and is a prefect title for fans of speed running.

One flaw with the game is the size of the text which is so small I had to really focus to see it and it’s an issue that is often seen with certain titles on the Nintendo Switch.

The graphics are cute and everything is easy to see and follow without being outstanding. The game is easy to learn but the challenge should not be underestimated as the game progresses. The music is really repetitive and sounds like a tinny version of the James Bond theme stuck on a loop.

The game can become repetitive after a while but it’s a perfect title for the Nintendo Switch and for a decent price on the Nintendo eShop it will appeal to those looking for a speed running challenge or something to fill a few hours. 10 Second Ninja X is definitely one of those games where you will lose track of time as you keep saying ‘just one more go.’

The Nintendo Switch Online N64 Games to Try at Launch