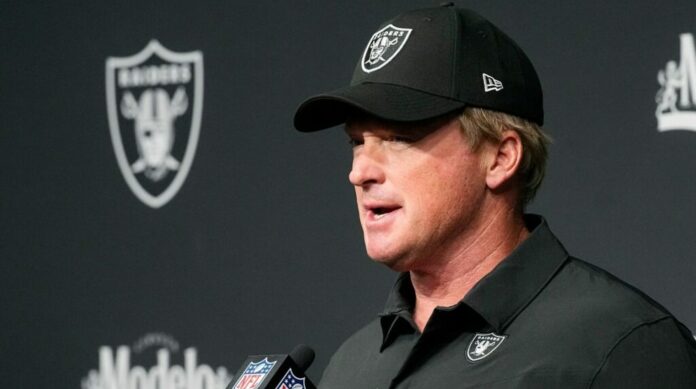 PcGamer.com contributor Joseph Knoop has reported, via a statement on Twitter by EA, that former Las Vegas Raiders head coach Jon Gruden will be removed from Madden 22 via a future update. This comes on the heels of emails from Gruden being discovered after a current, ongoing investigation by the NFL into the practices of the Washington Football Team Organization. After around 650,000 had been identified, Gruden informed his former team that he would resign from his head coaching duties, in order to not be a further distraction. Las Vegas Raiders owner Mark Davis has remained brief and curt on the matter.

Taking Action is a Step Forward, Now We Must Never Step Backwards

The original email that started the avalanche contained Gruden’s commentary about the NFL’s black player union rep DeMaurie Smith, who was described as having lips, “the size of Michelin tires.” The former coach tried to explain that he used the term “rubber lips” to describe liars. However, lip size has been a constant derogatory stereotype against black people for generations and has been negatively and racistly portrayed in film and tv productions. To use that term, especially in the form of communication that is usually private, is a red flag of someone’s belief system and deeply held opinions.

Further emails discovered ranged from Gruden calling the NFL commissioner a homosexual slur, exchanging racy photos of the Football team’s cheerleaders, and sharing negative commentary on female referees.  Private conversations always expose how a person truly thinks, because they believe the conversation will always stay that way, private. In this case, the 650,000 uncovered emails paint Gruden as simply a bad person overall. The removal of his likeness from Madden 22 serves as a punishment for this behavior and is an attempt to curb any growing toxicity moving forward.

This is one of those instances where the gaming and sports worlds intersect, as they both suffer from the same toxic issues. You have to give EA credit for making the right decision, even if there may not have been much of a choice there. As noted by Knoop in his article, EA has taken this action before with Soccer player Benjamin Mendy who had been charged with four counts of rape and one count of sexual assault. For an industry that has placed itself in a beleaguered situation with its own racist, sexist and racist conflicts, positive actions must be acknowledged.

To combat this toxicity in society that has been lying underneath for so long, steps must be taken even if there are complaints of a “Cancel Culture”. This concept has arisen from the perception that society is punishing those harshly due to skeletons that lay in their closet. While, yes there are people who do wish to assign extreme punishment to basic missteps, those same individuals need to acknowledge the difference between that and consistent, unapologetic, behavior causing mental, emotional, and sometimes physical harm to others.