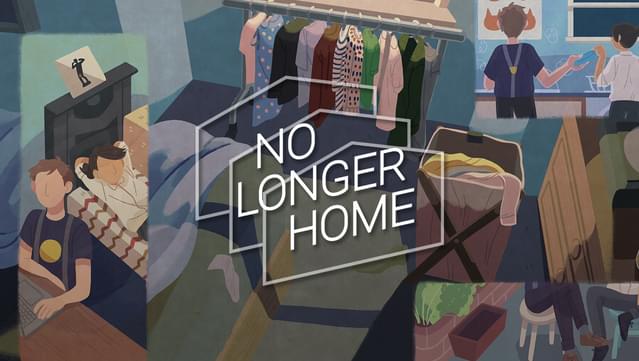 No Longer Home, a point-and-click game by Humble Grove, launched on the Switch on the 7th of October. Narrative-based indie games are my thing, and I’m always excited to find another one, especially on the Switch.

What Actually Happens In No Longer Home?

You switch perspectives between Ao and Bo, two friends living out their last night in the flat together before leaving their university home (and each other) behind. It’s not a story with unexpected twists and turns or alternative endings: it’s just a retelling of that last night.

It’s a game about saying goodbye. The startling and sometimes bleak reality of facing responsibilities, of leaving the university bubble, and moving on to whatever is next. Both characters walk around the flat and wonder: where did that time go? How did those incredible, formative years disappear so quickly?

What No Longer Home does really well is to capture that feeling of ‘flatness’ that I remember from early adulthood. Not necessarily terror or excitement, just a blank, exhausting feeling of unknowing. Spending a few hours living that out through Ao and Bo brought up feelings I had long forgotten.

Ao, Bo, and their friends have conversations about what will happen next. They talk about jobs, and moving, and being left behind, and the unsettling feeling that they might not actually be good at doing anything. Some of these conversations drag a little, outstaying their welcome just slightly. But they do feel relatable.

The story touches on many themes, including the difficulty of finding your place as a queer student, familial expectations, and deals briefly with depression and dark thoughts. These issues aren’t explored in much depth, as the game is so short.

The style, in terms of gameplay and design, is pretty reminiscent of Kentucky Route Zero. In fact, I was gobsmacked when I realised that they weren’t made by the same team. The minimal gameplay, slow plodding of the characters, and even the main font reminded me heavily of KRZ, another narrative-based game that I really enjoyed.

The characters, meanwhile, remind me of the blank-faced, eternally tortured villagers from Untitled Goose Game. To the point where I half-expected one of them to shoo me away for stealing their pumpkins or something.

The flat itself is lovingly rendered, with many little details to look at, even if you can’t interact with all of them. Each room appears to kind of hang against a starry background, giving it a nice existential feel, and preventing it from ever becoming too realistic to be mundane.

Certain sections feel like watching a play rather than playing a game. The walls of the flat occasionally slide away, revealing a different backdrop, and then slide back again, slotting into place like a puzzle. At one point two characters talk in the glare of a streetlamp as though standing under a spotlight.

A standout moment for me is during a conversation the friends are having about the development of a new housing complex underground. As they try to imagine what it might be to live there, your perspective sinks slowly, through layers of dirt, to the workers busy constructing the housing complex underneath their feet.

The sound design is excellent, and the music has a spaced-out, lo-fi kind of vibe.

The gameplay is very minimal, with the story taking the spotlight. You potter around the flat, interacting with items and talking to people, slowly learning more about Bo and Ao. It works pretty well on the Switch, although I wish you could play it properly handheld rather than having to disconnect the Joy-Cons and play it that way.

Your main goal is to do what all humans do when they leave a place they once called home – to walk through it one more time, peering into each room, desperately trying to soak it in. Again, No Longer Home made me think of all the homes I have left behind in my life, and those surreal last nights before saying goodbye.

You can ‘turn’ the flat, giving you a new perspective on each room, uncovering hidden spots. It’s worth rotating every room to make sure you see everything. It feels like you are really moving something solid, with a metallic dragging sound, as though rotating it is a monumental effort.

I’m still not sure what difference my dialogue choices made – it didn’t feel like I could make any major changes to the story, and I kind of wish the stakes were higher.

Oh, and you can pet the cats. Any game that allows me to pet a cat gets bonus points.

No Longer Home is a short game. To be honest, I expected it to be a bit longer given the price, and I felt a bit frustrated that I barely scratched the surface in terms of finding out who Ao and Bo actually are.

My favourite part is right at the start.

In the prologue, you get to see Ao and Bo having their first proper (drunken) conversation. It is exactly like watching yourself in your twenties – going from ‘I barely know you’ to ‘let’s have an incredibly deep philosophical conversation about the meaning of life’ in about thirty seconds. You get to see them click together, a fledgling friendship right at the start. And it’s really nice to watch.

Do their conversations become a bit pretentious and self-centered? Well, yeah, sometimes. But then again, I think I remember being like that in my early twenties, too.

Overall, it was a surprisingly emotionally complex game, but a lot shorter than I’d like, and maybe a bit too derivative of Kentucky Route Zero. Still, I’d recommend giving it a go if you’re after a new indie game for the Switch.